Even billionaire CEO’s, rock stars, and actors are Buddhists, but this isn’t the problem. The problem is, Buddhism in America has become largely inaccessible to the masses. Instead, it has become a capitalistic endeavor - a money making pastime that is everything but what the Buddha actually taught. 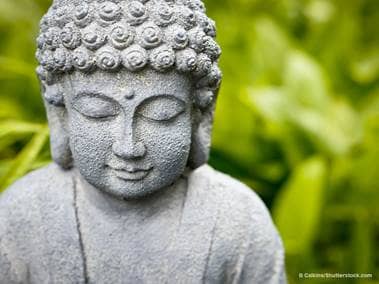 Christmas is upon us and my email tells me that the best Buddhist gift ideas have just been placed on sale. The newly revised, hard bound, revised forward, with an introduction by so-and-so is now available for $49.95 and if I buy the complete box set of seven books, I will only have to pay $299.00 instead of $350.00. This is a great relief to me as my new designer silk meditation cushion and handcrafted mala have already set me back almost $600.00. I tell myself that it’s cool. The other email I got from ChildFund that asked me for only $19.00 can wait until after the New Year, because these dharma deals don’t come around very often.

For many of us, this is probably the norm. Gentrified Buddhism is all the rage. Even billionaire CEO’s, rock stars, and actors are Buddhists, but this isn’t the problem. The problem is, Buddhism in America has become largely inaccessible to the masses. Instead, it has become a capitalistic endeavor - a money making pastime that is everything but what the Buddha actually taught. It has become Christianity’s false prosperity gospel, where instead of Jesus saying, “sell all you have and give to the poor,” it is preached that Jesus wants you to be rich like me, and live in a 35 million dollar mansion.

The pursuit of wealth, items and status are little more than extreme grasping. It is an attempt to control a world in flux and seek non suffering through the very path of suffering itself. In the Jatakamala, Buddha says, “Riches make men greedy, and so are like caravans lurching down the road to perdition.” Seems kinds of rough, right? “But I’m not attached,” you may think, “and it’s attachment that causes suffering, not all my stuff.” When we have to justify, we probably have our answer right there; the wise give and the wicked hoard.

In American Buddhism, we don’t use words like wicked, evil, etc. because it’s just not cool - it’s too preachy. In reality, the problem is more likely that it doesn’t appeal to our ego. The Buddha was blunt. This is the path to suffering and this is the path out. Sadly, we have gone the way of the dodo far too often; our ‘Buddhism’ is a status symbol, a pastime, a way to remain ethical millionaires - a Buddhism for Bourgeoisie. We can’t serve two masters though; “one is the way to gain, the other to nirvana..”(Dhammapada).

So how do we engage the dharma? First and foremost, we must realize that it is not a purchase to be made. It does not require a single item, but was freely given to all sentient beings. The Buddha gave away his attachments and then sat under a tree. No zafu, no meditation tray, and most likely, no mala. It was a process of meeting the mind. It was a removal of all unnecessary thoughts and ideas.

The dharma was unique in its pure simplicity and accessibility to everyone, regardless of sex, class, caste etc. Be a thief, murderer, young and old, male and female; it was a revolt against everything that the bourgeois class religion of the time stood for. You do not need an intercessor, you do not need wealth and you do not need a single item aside from the will to relinquish attachments to false views.

Compassion and awareness is the path. To give our tradition meaning, we must once again be fully willing to relinquish our false views and attachments. This is no easy task given our ‘acquire things at all costs’ culture.

How do we break this habit formation? How do we fully engage the eightfold path of right livelihood, right speech, right action, etc.? We remember that the engagement is not an issue of putting yourself first. The process of dharma teaching, while taught as a self liberating tool, was also put down as a social reform; a way to create a unique society free of bondage, war, malice and the like. In order for our right path to be manifest, it must be right for all beings. We break our attachment when we stop asking how can this serve me and instead, how can we best serve each other.

Ty Phillips is a Dharma teacher, addiction and recovery counselor and the founder of Death Metal Dharma-Teen Outreach program. He specializes in teaching shamatha meditation and mindfulness to teens and addicts to aid them in finding a better and more peaceful way to live. He has written for Elephant Journal, Rebelle, Thought Project and is trying to complete his first book. He lives in Cleveland, Ohio with his cat Darwin. He writes at his blog The Tattooed Buddhist .