The Buddha’s mindfulness practice reconfigures our brains to make us sharper, smarter, healthier and happier, and that it can help treat stress, anxiety, depression, chronic pain, hypertension and substance abuse. 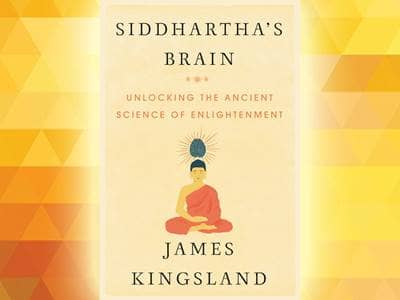 In SIDDHARTHA’S BRAIN, longtime Guardian science journalist and practicing Buddhist James Kingsland investigates the ancient and modern takes on the health and spiritual benefits of meditation and mindfulness in this highly-readable, cutting-edge assessment that shows how Siddhartha, known to us as the Buddha, anticipated the findings of modern science by two millennia. Moving effortless between science and scripture, Kingsland charts Siddhartha’s spiritual journey and explains how new research by leading neuroscientists and clinical psychologists – many of who are interviewed here – suggests that the Buddha’s mindfulness practice reconfigures our brains to make us sharper, smarter, healthier and happier, and that it can help treat stress, anxiety, depression, chronic pain, hypertension and substance abuse

Many have argued that Buddhism is not a religion at all, at least not in the conventional sense. To an atheist and skeptic like myself, this lack of a supernatural belief system makes Buddhism very appealing. When I first became interested in its practices and philosophy, some five years ago, I was also intrigued by the way “sin” in the language of other religions—lust, gluttony, sloth, wrath, envy, pride, and so forth—is labeled more neutrally by Buddhists as “unskillful behavior” that will reap painful consequences through the ineluctable operation of the laws of cause and effect. The implication seems to be that to be a good, contented human being is a skill that can be learned, like driving a car or baking a cake. The more you practice, the better you will get at it. Viewed this way, to judge someone for their greed or pride starts to look as misguided as condemning them for not being able to drive or bake. Nevertheless, why should Buddhism be any better than the other world religions—or indeed a completely secular approach—at teaching such skills? All things mystical and religious, regardless of whether or not they involve a god, a creed, or commandments, are viewed with suspicion by many scientists and nonbelievers, including the majority of those I have worked with over the years in my job as a science writer and editor. And the cure Buddhism claims to offer for the afflicted human mind is largely based on meditation, which for professional skeptics like myself looks initially like just another health fad. Mindfulness meditation, which involves cultivating nonjudgmental awareness of the present moment, has gone global. There are programs tailored for use in schools in the UK, for young offenders in New York City, for US Marines awaiting deployment, for firefighters in Florida and taxi drivers in Iran, to name just a few.

But, in intellectually conservative circles, announcing that you meditate is still likely to be met with a snort of derision. Claims in the past about the efficacy of meditation have been tainted with a certain amount of woo-woo New Age mumbo jumbo. In several countries around the world, people still remember elections during the 1990s when candidates for the Natural Law Party advocated transcendental meditation as the cure for all the world’s ills. The party declared that its “systematic and scientifically tested” pro- gram would involve thousands of meditators creating “coherence in national consciousness” to reduce stress and negativity in society through the power of levitation. I remember watching the party’s surreal 1994 European election broadcast in the United Kingdom, which showed cross-legged young men bouncing across mattresses on their bottoms. We were informed that a group of these “yogic flyers” had already reduced the crime rate in Merseyside by 60 per- cent over the previous seven years.

Against this backdrop, scientists looking into the potential clinical benefits of mindfulness meditation have had to work hard over the past few decades to be taken seriously. Several researchers have told me that when they started out in the field, it was consid- ered career suicide to admit to your peers that you were investigat- ing meditation. This has all changed now. Some of the world’s most respected clinical psychologists and neuroscientists are now involved, and their papers are published in mainstream journals such as Nature, Proceedings of the National Academy of Sciences, and The Lancet. The credibility of the field has been enhanced enormously through the use of new brain-scanning technologies such as fMRI (functional magnetic resonance imaging), which has shown in study after study that meditation produces discern- ible changes in brain activity.

Another remarkable development has been recent studies of the brains of Buddhist contemplatives who have clocked decades of meditation experience in various monastic traditions. This research has largely been inspired by formal discussions since the 1980s between scientists and the Dalai Lama. One of the neuro- scientists most closely involved in this work is Richard Davidson, from the University of Wisconsin, who says we still have much to learn from contemplatives. “This research has underscored the potential value of these traditions for cultivating healthier habits of mind,” he told me. “Mental practice can lead to fundamental changes in the brain to support these new habits.” He believes that the brain’s innate “plasticity”—its capacity for rewiring itself as we learn from experiences and develop new skills—can be harnessed to promote well-being. According to this view, happiness is a skill that, like any other, can be developed through diligent practice.

All the same, there remains a certain wariness of meditation. One common misunderstanding, which inspired my cynical joke that morning at the monastery, is that it transforms people into creatures who have had all their desires, ambitions, and personality excised—zombies, if you will. When I played back the recording of my interview with Ajahn Amaro, I was relieved to discover that it was he who first brought up the subject. I had suggested to him that Buddhism, with its emphasis on cultivating “selflessness,” went against the grain of Western culture, with its emphasis on endless striving for self-advancement. It’s what gets us out of bed in the mornings and pays our bills. He disagreed. “People think that in Buddhist practice you’re meant to be free from desire and so then we shouldn’t want anything. They take it to mean that we’re supposed to be totally passive, or endeavoring to be a kind of zombie that isn’t doing anything. It’s a radical misunderstanding, because a) work does not mean suffering, and b) peace does not mean inactivity. When we think ‘I want to be peaceful’ we think of zoning out at the beach, but you can be completely at peace and working hard at the same time. They are not antithetical to each other.”

If anything, this book will argue that the evidence from neuroscience suggests that meditation can make people less zombie-like, by giving them more control over their thoughts, emotions, and behavior. Siddha¯rtha’s Brain is about the science of mindfulness and the quest for spiritual enlightenment—or, to express the same thing in less loaded terms, the search for optimum psychological well-being. Enlightenment has distinct religious overtones, though what Buddhists mean by the word is simply the full realization of the way things truly are—free of any kind of delusion. This is not so different from what scientists are trying to achieve when they investigate the chemistry, physics, and biology of our world. But what of that other slippery word, spiritual? As I have looked deeper into mindfulness and Buddhism, the dividing line between the spiritual guidance provided by teachers such as Ajahn Amaro and the mindfulness courses provided by mental health practitioners has started to look less and less clear-cut. In the past decade, thousands of studies have been published that tested the efficacy of secular forms of mindfulness meditation for treating drug addiction, depression, anxiety, and many other afflictions of the mind. Whether you believe this approach is seeking to improve people’s “spiritual health” or their “mental well-being” is a matter of perspective. Your choice of words will depend on whether mindfulness training is delivered in a monastery or a clinic. Ajahn Amaro, in common with many other Buddhist teachers, sees himself as much as a mental health counselor as a spiritual adviser. Every day people share their anxieties, their problems, and hang-ups with him. He listens and offers advice about possible courses of action. When it comes down to it, there’s not that much difference between his role and that of a secular expert in mindfulness therapy.

James Kingsland is a science and medical journalist with twenty-five years of experience working for publications such as New Scientist, Nature, and most recently the Guardian (UK), where he was a commissioning editor and a contributor for its Notes & Theories blog. On his own blog, Plastic Brain, he writes about neuroscience and Buddhist psychology.