Between Heaven and Earth: The Beliefnet Trip to Bhutan

A day-by-day travelogue of our journey through a Buddhist kingdom.

Beliefnet
In September 2003, Beliefnet travelers journeyed to the "Last Living Buddhist Kingdom," Bhutan. Hiking through the spectacular Himalayas, learning the legends of Buddhist holy men, and meeting the locals, trip participants explored the kind of spiritually-infused culture that's largely lost to the Western world. Here's what we did.

After a 20-hour journey to Bangkok, followed by a just a few hours of restless sleep, we are finally en route to Bhutan, nestled in the breathtaking Himalayan mountain range.

Landing in the one-strip Paro airport, we exit the small airplane and wave goodbye to the pilot. We've just set foot on one of the most remote and isolated places in the world--a place where, for centuries, the Buddha's timeless teachings of wisdom and compassion have infused every aspect of life.

Our local guide, Kinga Dechen, greets us dressed in the colorful Bhutanese "gho," the compulsory robe for all the country's men. He soon becomes our trusted friend and a beloved teacher.

We head for the hotel, made up of small, traditionally-decorated cottages on the slopes of the Paro Valley. The views are spectacular!

After a quick buffet lunch, we set out for Ta Dzong ("lookout fortress"), now the National Museum. There we see a wonderful collection of old thangkas (wall hangings which illustrate stories of the Buddha and various Buddhist deities). Our Beliefnet scholar, Larry Mermelstein, explains the hangings, conjuring up images of dancing dakinis and awakened beings.

We're granted special permission to visit the inside of Dungtse Lhakhang, the 3-story temple of Thangtong Gyalpo, before we head off to visit our first "dzong", the majestic white fortresses which house the administrative offices of each local district. Most dzongs in Bhutan are built on hilltops and are architectural symbols of strength and unity. Paro Dzong is known as the fortress built on a heap of jewels.

We have lunch in a tiny restaurant called Sonam Trophel, where Mrs. Sonam cooked up incredible ginger potatoes and chicken wings. It was to become our favorite eatery in Bhutan (just second to the "pizza palace" in Bumthang!)

Larry has a wonderful surprise for us this afternoon: a dharma talk by a very young lama named Yangsi Khyentse, the reincarnation of His Holiness Dilgo Khyentse Rinpoche. His older brother translates for us. We're allowed to view the amazing, rarely seen murals of the "eight logos" mandalas, and end the day with the lama's family at a sumptuous dinner.

On the spectacular drive to Thimphu (Kinga warns us not to use up all our film: "wait until we cross the mountains and travel to the East!"), we stop at Tachok Gompa. It was built by the famous Thangtong Gyalpo, a famous Tibetan saint who, Larry explains, discovered the art and design of iron chains used to build suspension bridges.

We visit the Traditional Arts and Painting School, where young students keep Bhutan's traditional arts alive. At the National Library, we see thousands of old Tibetan manuscripts. Our final stop, the Post Office, is an unlikely favorite: Bhutan has some of the most sought-after stamps in the world. 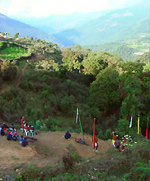 Our journey east begins. It's a long, windy drive across two mountain passes but, as Kinga says, it's one of the most magnificent drives in the Himalayan world. Our first stop is Dochu Pass (10,000 ft), covered with thousands of tall prayer flags. A prayer flag is set up high on the mountain pass for each person who passes away, carrying the soul of the dead across the land. It's a truly magical place.

Larry performs a "lhasang purification ceremony" by burning juniper and reciting a number of Tibetan mantras. The ceremony is designated to restore balance and harmony in the universe.

We make a quick stop to view Punakha Dzong before we reach our campground at Chendibji Chorten. Our camp staff greets us as we arrive. The tents are set up (the Bhutanese like their beds firm!) and our cook has already prepared one of the most delicious meals we'll have on the entire trip. As a matter of fact, our cook continues to amaze us with great cuisine every time we set up camp.

We begin the day with a morning meditation session on the grounds of this sacred place. Chendibji Chorten was built in the 19th century by the Tibetan Lama Shida to cover the remains of an evil spirit that was killed at this spot. It is the westernmost monument in a "chorten path" that was once the route of early Buddhist missionaries.

After we cross Pele Pass and just before we reach Jakar in the Bumthang Valley, we stop at one of Bhutan's weaving and fabric stores. Bhutanese textiles are known throughout the world for their intricate colorful designs.

We arrive in Jakar in the evening and check in at the Bumthang Mountain Lodge, which is reminiscent of a ski lodge in the Rockies. The staff at the lodge fires up everyone's small wood stove just before bedtime, making for toasty warm sleep.

The countryside in the Bumthang Valley is much different from anything we have seen so far: spacious and wide open, with gently sloping hills. Bumthang Valley is the historic heart of the country and the subject of many stories and myths, which Kinga regales us with. The valley was home to Guru Rinpoche (Padmasambhava), one of the most revered religious figures in Bhutan, and Pema Lingpa, a famous discoverer of Buddhist treasures.

We start at the temple of Jampa Lhakang, which houses a Buddha of Future protected by an iron chain made by Pema Lingpa. The temple's many red-robed monks greet us with gentle smiles and follow our every move curiously.

The next stop is the temple of Kurjey Lhakhang, said to contain a rock with the imprint of Guru Rinpoche's body. As we enter the monastery, one of the oldest lamas leads us up the stairs into one of the prayer halls. We're just in time to join the monks who assemble here for their morning prayers. We sit quietly in the back and listen to the mantras.

In the evening, we stroll through Jakar and stop for dinner at Bhutan's only "pizza palace." 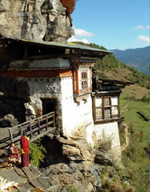 Kinga warns us that the hike up to Kunzandrak Monastery is going to be difficult. It takes about two and a half hours to reach the site, which houses many of Pema Lingpa's sacred relics. Though strenuous, the hike is a wonderful journey in itself. We pass through small village settlements and are invited to join a local family for lunch. We also help a local woman and her young son collect firewood on the slopes of the mountain. As we huff and puff along in short little spurts of climbing, our ultrapatient guides wait for us to make it to the top. When we reach the monastery, we filled our water bottles with holy water running from a rock above the buildings.

The final stop for the day is Membartso Fire Lake, where Pema Lingpa discovered several of Guru Rinpoche's hidden treasures. Larry conducts a meditation session at the lake, which is surrounded by prayer flags and small clay offerings left behind by local worshippers. Kinga brings small candles, which we light and place in the lake. It's said that if your candle does not sink, you are living a spiritually enriched life.

It's a long day of driving as we re-trace our steps back to the Western part of the country. Larry and Kinga fill the time by sharing exciting legends of Bhutan.

This morning Larry leads us to a rarely visited site in Punakha, the stupa of Nyizer Gang. It's a lovely 40-minute walk to the beautiful dome-shaped shrine, dedicated to Vajrakilaya and other tantric deities.

We make an unexpected stop at a local house. Larry introduces us to the parents of Yeshi, one of the monks that Larry befriended during his stay in Nepal. We join them for tea, popped rice, cookies and great conversation.

Back in Thimphu, there's enough time to visit the handicraft store for last-minute souvenirs.

At the Thimphu zoo, we see takin-a strange-looking ox-like animal. After a visit to the Textile Museum and some shopping, we have lunch and head for the spectacular cliffside monastery Taksang.

Also known as Tiger's Nest, Taksang is one of the most venerated pilgrimage sites of the Himalayan world. The hike up to Taksang takes about 2 hours. As we reach the teahouse, we catch our first glimpse of the monastery.

No Western visitors are allowed inside Taksang, so Larry prepares what is known as a "Sadhana of Mahamudra." The group gathers on a small ledge as Larry recites an ancient tantric practice revealed to his teacher Trungpa Rinpoche here at Taksang many years ago. Our time here is a highlight of our stay in Bhutan.

We bid farewell to Kinga with a deep appreciation for the traditional and spiritual values that thrive in the lives and hearts of Bhutan's people.