Why Prayer is the Most Human Thing We Can Do

We are wired to understand that prayer brings comfort, hope, and a persevering heart. 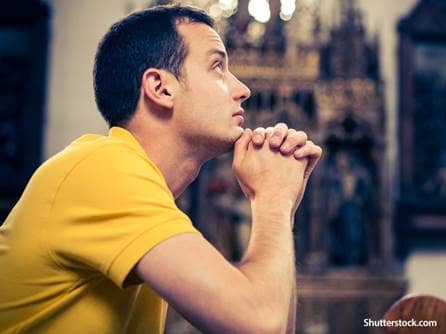 I was an atheist for more than 20 years, so I know firsthand the common rhetoric that arises in such circles when horrific tragedies like mass shootings and ISIS terrorist acts make the headlines. During those times, the atheist asks: “If God is good why does evil exist?”

Now I am lead pastor of a church with more than 60 nationalities, and I find that in these dark days the words of C.S. Lewis resonate more than ever: “God whispers to us in our pleasures, speaks in our consciences, but shouts in our pains. It is his megaphone to rouse a deaf world.”

Lewis is not assigning blame to God for our pain. Rather, he’s recognizing that pain turns people to God. Wired into our human psyche is an understanding that prayer brings comfort, hope, and a persevering heart. Pain and tragedy should never come between you and God. Those who live a true life of prayer recognize that the better and more helpful question is, “God, how do I pick up the pieces after this misfortune?”

We are called to pray without ceasing

A 2013 Pew Research Center study indicated that older Americans (60 percent) are more likely than younger ones (45 percent) to pray daily. Could it be that our aging hearts, having witnessed more pain, are in need of more comfort and acknowledge our dependence on God?

But we would do well to realize that we all need prayer right now. We cannot turn away from Jesus’ call to pray without ceasing.

In fact, the most human thing we can ever do is pray. We are most human — virtuous, morally grounded, and generous with our love — when we have regular times on our knees. The most hope-filled and resilient people on the planet are those who give themselves to prayer. The weakest person is one without prayer. Prayerlessness is an admission that you don’t need God’s help. You can go it alone. Such a posture weakens you and keeps God at arm’s length.

Some fear that praying is akin to abdicating human responsibility or action. Quite the opposite is true. Prayer is the maximizing of human action. Prayer is God’s invitation into our affairs. We are most powerful when we pray.

The Judeo-Christian tradition unanimously holds to the view that God is omnipotent. Hence, when we pray we are invoking Almighty God into our affairs. We’re seeking his divine guidance to help us manage our human dilemma.

Take for example the reaction of the families of the nine victims of Dylann Roof’s hate-filled shooting in Charleston, South Carolina. They expressed forgiveness toward Roof. This shocked the nation. Not knowing the bigness of their hearts, we braced ourselves to hear a retaliatory diatribe toward white supremacists, a rallying call for black empowerment, or some venomous denunciation of Roof’s dark worldview.

Instead, their humanity, forged by prayer and Christian virtues, empowered them to express three poignant words. At the court hearing, Nadine Collier’s voice cracked with emotions as she spoke the sobering words to Roof, “I forgive you.” He’d gunned down her 70-year-old mother, Ethel Lance. Collier went on to say, “You took something very precious from me. I will never talk to her again. I will never, ever hold her again. But I forgive you. And have mercy on your soul.”

If the above picture of humanity is precipitated by prayer, what’s the downside of prayer?

If you’ve not prayed in a while or have never prayed, don’t worry. You can learn how to pray. In fact, Jesus taught the enquiring disciple that you learn prayer as you are praying. Start off by asking God to teach you how to pray. If God exists and indeed is omnipotent, he is intelligent enough to guide you in how to speak with him. Be encouraged. Pray until you can pray.