Why is Easter on a Different Date Each Year?

What is it with Resurrection Sunday? One year it’s in March, the next in April! Is it true the British parliament tried to force the issue? And was ignored? 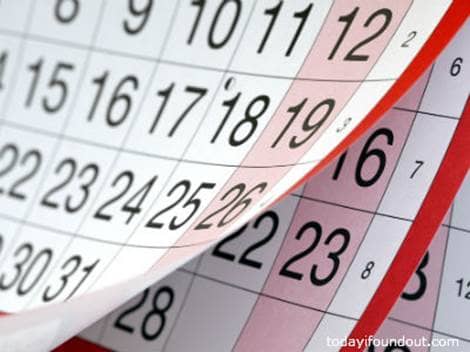 Have you ever wondered why Easter Sunday changes each year? We have other holidays that shift annually – Thanksgiving, for example, is always on the fourth Thursday of November. That means it can occur on any date from November 22 to 28.

However none of them are as unpredictable as Easter.

“At the heart of the matter lies a very simple explanation,” writes Mary Fairchild on the website Ask.com. “The early church fathers wished to keep the observance of Easter in correlation to the Jewish Passover.”

After all, the death and burial of Jesus Christ occurred on the day before Passover. Christ’s resurrection happened the day after Passover.

So, the church “wanted Easter to always be celebrated subsequent to the Passover,” explains Fairchild.

However, the date for Passover changes every year. “The Jewish holiday calendar is based on solar and lunar cycles. Each feast day is movable, with dates shifting from year to year,” notes Fairchild.

So, what could have been simple got immediately complicated.

If the church had stuck to the original plan, Easter would always be celebrated at Passover.

However, the church and the Jewish community have not always gotten along. The Spanish Inquisition, for example, was not exactly a model of religious unity or a celebration of diversity. The bad relations climaxed, one might say, with Hitler’s attempt to wipe Jews off the face of the earth.

However, Jesus was Jewish and taught love and forgiveness. So, the church’s contradiction of loving everybody – except Jews – stems from the New Testament account of Jesus’ trial in Matthew 27:24–25, "When Pilate saw that he was getting nowhere, but that instead an uproar was starting, he took water and washed his hands in front of the crowd. 'I am innocent of this man’s blood,' he said. 'It is your responsibility!' All the people answered, 'His blood is on us and on our children!'"

As a result, 2,000 years, Jews were regarded as “Christ killers.” Only in the 1960s was the taint officially lifted by Christianity’s largest group, the Roman Catholics. As a part of the Second Vatican Council (1962–1965), Pope Paul VI issued a declaration which repudiated collective Jewish guilt for the crucifixion of Jesus.

In other words, today’s Jews cannot be held responsible for Christ’s crucifixion. They weren’t there. They had nothing to do with it. They weren’t born yet.

However, in the third century, resentment was still raw. And the church didn’t like having to ask the Jews each year when Easter should be celebrated.

So, in the year 325 A.D., the Council of Nicaea “set the date of Easter as the Sunday following the paschal full moon,” writes Scott P. Richert on the About website.

What is paschal full moon? That’s the first full moon either on or after the spring equinox.

What is the spring equinox? An equinox occurs twice a year, around March 20 and September 22. You’d think that the equinox is the day when daytime and night are of the same length. Sure, the word equinox comes from this definition, derived from the Latin aequus (equal) and nox (night). However, the equinox is not exactly the same as the day when period of daytime and night are of equal length.

So, if we want to be proper, we should use the word equilux to describe the 24-hour period in which the periods of daylight and night are equal. Also, the times of sunset and sunrise vary with an observer's longitude and latitude, so the date when day and night are of exactly equal length depends on your location.

Basically, the equinox occurs on different days in different locations around the globe.

So, it’s not an accurate way in which to base anything – particularly when to celebrate Easter.

Prior to 325 A.D., Easter was always celebrated on the Sunday immediately following the paschal full moon. However, after the Council of Nicea, it was decided to establish a more standardized system for determining the date of Easter. As a result, explains Fairchild, today “the date of the paschal full moon is determined from historical tables, and has no correspondence to lunar events.”

“Astronomers were able to approximate the dates of all the full moons in future years. The western Christian church used these calculations to establish a table of ‘Ecclesiastical Full Moon’ dates. These dates would determine the Holy Days on the Ecclesiastical calendar.”

However, that didn’t work very well either.

The solution should have been simple – just go back to celebrating Easter whenever the Jewish community was celebrating Passover. However, that was politically incorrect.

So, around 1583 A.D., the table for determining the Ecclesiastical Full Moon dates was permanently established and has been used ever since to determine the date of Easter. As a result, it’s rare that Easter falls on Passover.

So, Easter dates can wildly swing from March 22 through April 25.

The bottom line? Forget about trying to calculate next year’s date for Easter by yourself. Just look in your Farmer’s Almanac or Google it or glance up at the calendar on the wall.

And if you didn’t think the matter could get any worse, it does. There are two Easters celebrated annually around the world.

When the Roman Empire split in two almost 2,000 years ago – with the western empire centered in Italy and the eastern empire headquartered in Turkey, the church split as well.

There were a lot of theological reasons, such as the wording of the official creed and Mary’s role. However, today, the two groups can’t agree about much of anything beyond “Jesus is Lord.”

And they celebrate Easter on different dates.

Why? Back in the Roman Empire, Julius Cesar established the calendar we still follow. However it was flawed. During the Renaissance, it was realized that the Earth’s annual orbit around the sun is not exactly 365 days.

So, in 1582, Pope Gregory XIII lopped off 10 days from that year’s calendar. October 4, 1582 was officially followed by October 15, 1582. However, not everybody went along – particularly non-Catholics who believed the church in Rome to be “the great whore of Babylon,” described in John’s Revelation.

So, the Catholic countries of Europe such as Italy, Austria and France followed one calendar. Protestant countries such as Germany and Norway followed another as did Eastern Orthodox countries such as Russia, Albania and Greece. The Russians didn’t comply until the 20th century. Greece was the last to give in finally in 1923.

However, the Eastern Orthodox church still isn’t about to let Jews or Roman Catholics tell it what to do. So, the eastern churches still celebrate on a completely different date most years. They have evolved their own system, a 19-year cycle, as opposed to Roman Catholicism’s 84-year rotation. In 2007 Easter fell on the same date, April 8, in both calendars. It happened again in 2004, 2010 and 2011, but is a rarity.

There have been a number of suggested reforms.

In the United Kingdom, the Easter Act of 1928 declared that Easter was to be celebrated on the first Sunday after the second Saturday each April. However, church leaders scoffed at the idea of Parliament telling them what to do. As a result, the law was not implemented, although it remains on the UK Statute Law Database.

The reform was proposed to be implemented in 2001, but it is not yet adopted – nor is it likely to be since the WCC increasingly has less influence with the steady decline of liberal mainstream Protestantism.

What about the idea of just putting Easter back on the annual weekend when Jews across the world celebrate Passover?

It makes sense. It would conform to the Bible’s description of when Jesus rose again.

However, don’t expect such a solution to be accepted any time soon.