What Does it Take to be a Martyr?

How does one become a martyr today? 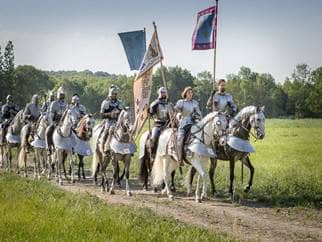 Joan of Arc was captured and executed at the age of 19 for heresy after she became a military phenomenon and icon of France. Arc claimed she had divine visions from God, who would lead the French people to victory in the Hundred Years’ War.

With her following, a retrial was set two decades later and Joan of Arc was cleared. It took 500 years until she would be canonized as a saint, and she is still loved today.

How does one become a martyr today? Does the same hold true like it did for Joan of Arc?

A martyr is defined as a person who chooses to suffer death rather than renounce religious principles, or someone who makes great sacrifices or suffers much in order to further a belief, cause, or principle, according to Dictionary.com. Becoming a martyr is about sacrificing for a principle, and many of us today can take notes from Joan of Arc since living for God was her main focus. She did not allow the world to swallow her up despite adversaries.  How?

Joan of Arc kept her heart pure, remained humble, and communicated what God wanted for His people--no matter what the price. She stood against the establishment. This is nothing  new. The Bible does talk about those who suffer for the Kingdom, and there is a special blessing for those who sacrifice their lives for Christ. Look at Paul, John, and Jesus Christ.

The book of Peter shares the blessings that follow for giving our lives for His sake.

“If you are insulted because of the name of Christ, you are blessed, for the Spirit of glory and of God rests on you... However, if you suffer as a Christian, do not be ashamed, but praise God that you bear that name (1 Peter 4:14- 16).”

You don’t have to die to be a martyr. It can be standing up for Kingdom beliefs. This can be friends asking you to denounce Christianity for friendship. The list can go on.

"Blessed are you when people insult you, persecute you and falsely say all kinds of evil against you because of me (Matthew 5:11).” God is calling us to sacrifice. This doesn’t mean losing our lives. It does mean advancing the Kingdom like Joan of Arc and like so many did before her.

Think about how you can serve others and Jesus today.

Find out more on Joan of Arc, a holiday season special airing on BYUtv on Thanksgiving, November 26 at 6 PM MT with rebroadcasts throughout the holiday season.

Corine Gatti is a Senior Editor at Beliefnet.com. Joan of Arc is a holiday season special airing on BYUtv on Thanksgiving, November 26 at 6 PM MT with rebroadcasts throughout the holiday season.