Unstoppable: Running the Race You Were Born to Win

In Unstoppable, bestselling author, global evangelist, and human-trafficking activist Christine Caine enthralls us with true stories and eternal principles that inspire us to run the race of our lives, receiving the baton of faith in sync with our team, the body of Christ. 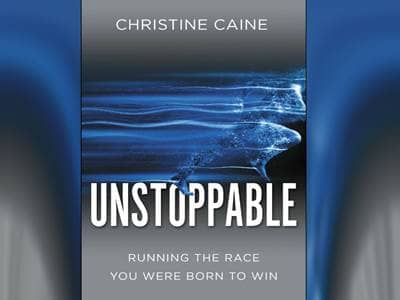 BECOMING WHOM YOU’RE RUNNING TOWARD

The Bible is full of ordinary people whom God called to his divine relay. Which of them, in their power, their resources, or their ways had what was required to do what God called them to do?

Moses was told to lead his people from slavery, then was caught between Pharaoh’s chariots and the Red Sea. Joshua was told to conquer the walled city of Jericho armed with nothing more than trumpets. Gideon was told to defeat the massive Midianite army after the Lord purposefully shrank his army from 32,000 men to only 300 armed with nothing more than trumpets, torches, and empty jars. Peter was beckoned by Jesus to get out of the boat and walk on water.

Are you catching the theme here? Just like these people, when we learn to focus on who God is rather than on what we are not, we see that it is God who is working in us to do the very thing he has purposed to do in our lives. As we learn to run the race, accept his batons, and submit to his training, God’s work in and through us is always growing and increasing. Christ in us becomes an unstoppable force in our lives and is spilled out into the lives of others.

Carrying the baton in our race is never about what we can accomplish for God. If he wanted, God could accomplish everything on his own without us, just as he created the heavens and the earth. He could have slain Pharaoh’s army and horses in mid-step and melted the chariots in the blink of an eye. He could have brought the walls of Jericho down as Joshua and his men were sleeping. He could have turned the massive Midianite army to stone before Gideon’s men blew a trumpet. He could have transformed the wild waves beneath Peter’s feet to solid rock. God’s goal in each of those cases was to do far more than accomplish a task — it was to build the faith of his people. He wanted them to grow in their experience of him. He wanted his people to taste his power and be transformed by his might.

As you continue in your race, refuse to focus on what you are not, what you cannot do, and what you do not know. Rely on God’s power. Rely on God’s resources. Rely on God’s ways. Focus on who Christ is in you. This is fixing your eyes on Jesus!
As you carry your baton, Christ’s unstoppable power is expanding in you. His impact on your world is going to increase. His transformation in you is going to increase. Once you’ve grasped this mystery — Christ in you — you will transform the world through acts of love and you will be continually transformed on the inside to become more like him.

I pray that out of his glorious riches he may strengthen you with power through his Spirit in your inner being, so that Christ may dwell in your hearts through faith. And I pray that you, being rooted and established in love, may have power, together with all the Lord’s holy people, to grasp how wide and long and high and deep is the love of Christ, and to know this love that surpasses knowledge — that you may be filled to the measure of all the fullness of God.

Now to him who is able to do immeasurably more than all we ask or imagine, according to his power that is at work within us, to him be glory in the church and in Christ Jesus throughout all generations, for ever and ever! Amen.

Christine Caine is a recognized teacher, preacher, author, and activist. As a founder of the A21 Campaign, Christine leads one of the largest non-profit organizations in the world dedicated to rescuing victims of human trafficking in 12 countries. Christine and her husband, Nick, spend their time in both Syndney, Australia, and the United States, and they adore their daughters Catie and Sophie.