The Religion of Democracy: Seven Liberals and the American Moral Tradition

Somehow the word “godless” got hitched to the word “liberal.” 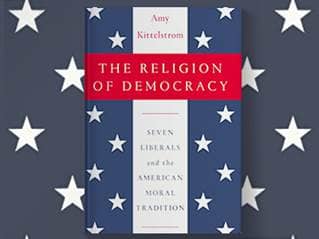 Somehow the word “godless” got hitched to the word “liberal.” The story of this coupling has something to do with the Cold War against communism, but behind this unholy union lies a much more interesting history of how some American elites led a very different fight against—well, elitism.

Seven liberals, whose lives interconnected across two centuries through shared readings, relationships, and concerns, were so far from godlessness that the pursuit of truth and virtue dominated their lives. The history they lived shows that after the Protestant Reformation in Europe came an American Reformation that built a moral tradition into democracy.

John Adams, the irascible, prideful second president of the United States, did not consider all people fit to vote, yet he thought every man had the right to make up his own mind about what to believe about politics, religion, or anything else—not only the right, but the duty to think for himself, because the only being who really knows everything is God.

The maiden aunt of Ralph Waldo Emerson made no fame for herself in a lifetime that began just before the American Revolution and ended in the middle of the Civil War.

Mary Moody Emerson spoke her mind, though, fearlessly and freely. In this fierce liberty she was not only being a good American, she was being a good Christian. Rev. William Ellery Channing never suffered for want of anything. He lived in an era when the wealthy regarded laborers almost as a separate species, but he called himself a working man to show his solidarity with the new laboring classes of his early industrial age.

He believed that all individuals, including slaves, deserved the freedom to think and act by their own best lights, and he believed this because of his Christian faith in what lay inside each soul and what potential all of God’s creatures could reach. William James, the most important philosopher in American history, also wanted for nothing, but he never became a Christian. He did not appear to be much of a democrat, either, with his distaste for uneducated speech and his regard for European standards of excellence.

Yet he professed to believe in a “religion of democracy” that took the sacred equality of all individuals as a postulate from which real human progress might flow. The Scottish immigrant Thomas Davidson fell from Christian grace early in life while learning all he could about modern science, ancient and modern philosophy, human languages, religion, and culture.

Yet he was more evangelistic than secular. The good news he wanted to spread was how free individuals interacting in all their diversity could make progress together, even Jews, even women, even workers in an age rife with prejudice of all kinds. William Mackintire Salter, son of a minister, also fell from Christian grace as a young man despite his most earnest religious commitment. Actually, his earnestness gave him the integrity to face his growing belief that Jesus Christ was not the one and only uniquely divine being ever to be born.

Salter became a post-Christian religious leader who called on the state to treat workers as equals with bosses during the industrial crisis of the late nineteenth century. Against the laissez-faire majority, Salter cried for social justice as sacred justice. The social thinker and activist Jane Addams did more than cry for social justice—she lived for it. Rather than giving the poor what she thought they needed, she lived among them as she believed Jesus would have done.

Through community, she built relationships that taught her what all humans share, a longing for pleasure and beauty as well as security and shelter and a sense of purpose in life. She connected workers and bosses, social scientists and politicians, educators and ministers, and philanthropists and activists from around the world. She wanted to make governments tend human needs and collective human needs drive global change.

Between the ideal of modern liberalism that has never been realized and the theory of classical liberalism that has never been dismantled—and amid contrary historical currents, like discrimination and exploitation that undermine both— these liberals and the rest of their intellectual family tree helped Americans and others think about why human beings ought to treat one another as equals who deserve to be free.

This book is a history of that idea.