The Problem with Jewish Pope Envy

“It is not for us to seek to alter another faith tradition — there are plenty of troubling and archaic teachings in our own — only to observe that we project onto charismatic leaders like Francis an idealized version of what we need,” Jane Eisner writes. 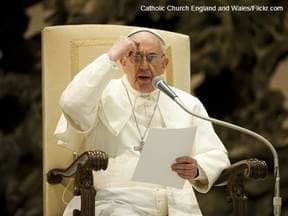 Pope Francis is the pope a lot of American Jews wish they had if they had a pope. In the two and a half years since Jorge Mario Bergoglio became the 266th head of the Catholic Church, he has captured hearts and stirred longing well beyond his global flock of more than a billion Catholics. His unadorned humility, his obvious concern for the poor, his off-the-cuff rhetorical generosity, his willingness to deliver excruciatingly tough messages about the environment and the roots of poverty and our culture’s reliance on unfettered capitalism — all have made him a focus of envy from liberal non-Catholics who not-so-secretly wish there were a leader like this in their world.

Francis is viewed in the media as “the ‘progressive Pope’ (National Review) who challenges the American Right on poverty and the environment as much as previous popes challenged the American Left on abortion and sexual issues.” That’s why, Ponnuru said, the latest Gallup poll showed Francis with a positive rating of 45 percent among conservative Americans, and 68 percent among liberals. The approval goes beyond Jewish liberals, of course. A noted Muslim columnist, Haroon Moghul, wrote on CNN.com that his own faith leaders come up miles short when compared with the man in the Vatican. That is why, Moghul wrote, “I’d like to invite His Holiness Pope Francis to convert to Islam… We’d love to have him on our team.

” As certain East Coast cities go into a frenzy preparing for Francis’s visit — why, even the Philadelphia Eagles’ schedule was changed to accommodate his plans! — we suspect that many Jews forgive the fact that his Popemobile will crawl down the National Mall in Washington on the morning of Yom Kippur. The pontiff-on-yontef is still our kind of guy. That embrace is prompted by a degree of acknowledged self-interest. Even before he ascended to the pinnacle of Catholic power, Francis was a leader in interfaith dialogue in Argentina and in the reforms codified in what is known as Vatican II. After the 1994 AMIA bombing of a Jewish community center that killed 85 people in Buenos Aires, then-Bishop Bergoglio was the first public figure to sign a petition condemning the attack and calling for justice. He often travels with his co-author and favorite rabbi, Abraham Skorka, who will also join him on this, his first visit to the United States. (All this led us to take the unusual step of designating Francis as the 51st name on the Forward’s annual Forward 50 list of influential American Jews in 2013.) As Rabbi Lawrence Hoffman noted recently , on Catholic-Jewish relations, Francis is viewed as a welcome corrective to the conservatism of his most recent predecessors. “When Francis reasserted the ‘common roots’ of Jews and Christians, and the reminder that ‘a true Christian cannot be anti-Semitic,’ Jews concluded that the gains of Vatican II might be here to stay,” Hoffman wrote. But that embrace is selective and, frankly, convenient for those of us not bound by the rigid Catholic teaching that Francis upholds. Francis wisely — or is it cleverly? — soft-pedals the social and cultural issues that so sharply divide liberal Americans from conservative dogma. Rhetoric aside, there is no change in the church’s positions against abortion, contraception, women’s rights and marriage equality — at least not in the foreseeable future.

The recent move to streamline the annulment process is a step toward empathy and efficiency, but still requires a divorced couple to make the heart-breaking declaration that their marriage never existed at all if they want to remain legitimate Catholics. The pope’s announcement that women who had abortions will be forgiven during a special year of mercy beginning in December is surely preferable to the condemnation of ex-communication that has existed until now. Still, as Jill Filipovic wrote in The New York Times , the millions of women around the world who terminate pregnancies are still considered sinners. “Inviting women to feel shame and guilt for their abortions isn’t a mercy; it’s cruelty,” she wrote. It is not for us to seek to alter another faith tradition — there are plenty of troubling and archaic teachings in our own — only to observe that we project onto charismatic leaders like Francis an idealized version of what we need. And here is where he poses the greatest challenge to American Jews. Not as a pope, per se: a God-like figure with enormous centralized power exists only in some strains of ultra-Orthodoxy. Most modern Jews reject an infallible authority figure — which is why rabbis have had to reinvent themselves as community organizers — and increasingly recoil from supporting established institutions that decide how to address the community’s welfare and priorities. But the core human yearning for authentic moral leadership remains as compelling as ever.

At his best, Francis is unafraid to disrupt the foundations of accepted social inequities and the frailty of human behavior with a message that is both damning and uplifting. One of the reasons Moghul said he wanted Francis on the Muslim team is that the pope’s overt welcome of Syrian refugees, including hosting families in Vatican parishes, contrasted sharply with the refusal of some wealthy Arab nations to open their doors. The desire for this kind of moral leadership is universal. Our eagerness to admire Pope Francis is tinged with a sad irony. Where, in the United States or Israel or elsewhere in the Jewish world, can we find political and spiritual leaders who are his equal but who speak our language, who present a Jewish vision that is challenging, compassionate and compelling? Where, indeed?

The editorial from Jane Eisner acknowledges the real envy American Jews are feeling as Pope Francis visits the U.S. – and looks at both the attraction – and the danger – of a charismatic religious leader. Read more on The Forward.