How does the Holy Spirit guide a film with no script? In the new documentary, Holy Ghost, director Darren Wilson seeks to capture the presence and works of the Holy Spirit through the lives of others. 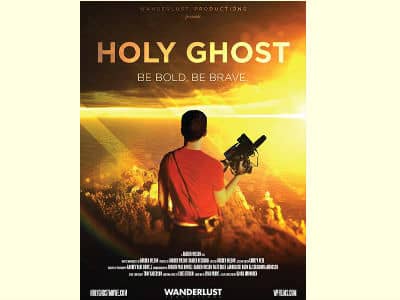 How does the Holy Spirit guide a film with no script? In the new documentary, Holy Ghost, director Darren Wilson seeks to capture the presence and works of the Holy Spirit through the lives of others.

Over 20 interviews are shown, and features several famed musicians (Lenny Kravitz, two band members of Korn), and leading pastors and evangelists (Devon Franklin, Chad Norris, Heidi Baker). As the film travels to various places around the world (Monaco, India), the director allows the Holy Spirit to guide where the crew goes.

“Holy Ghost is a film that beaks all kinds of barriers. We shot it with no script and no plan; we just showed up and allowed ourselves to be led on an adventure. Our distribution model is equally unique,” says director Darren Wilson.

Watching the trailer, there are a series of people from all walks of life, praying – some being prayed for, and others leading in prayer. The images delineate the impact of the Holy Spirit and the spiritual-to-human connection rooted in faith.

“Walking with Jesus, filled by the Holy Spirit, is so much better than anything you can do for God. Any work, any art; because you become the art, you become the work, “ explains Phil Vischer, creator of Veggie Tales.

The film has garnered much talk, being the “most-funded faith-based film in Kickstarter history.” Using one of the largest funding platforms, Wilson was able to raise almost $358,000 to help cover the costs of the film, going $158,000 over their pledge goal.

As the time nears to their worldwide release on September 6, Wilson and the independent film company, Wanderlust Productions, have been bold in their distribution and media campaign goals, looking to “disrupt the entertainment industry business model.”

Applying a “direct-to-audience” strategy, ‘Holy Ghost’ will be viewable to audiences on any digital device for free, starting September 6, and lasts for two days.

They believe that with their established fan base, the pull of social media, and the increase of consumers looking for more faith-based films, that ‘Holy Ghost’ will be a financial success, in the realm of digital media.

The worldwide premiere of the Holy Ghost is September 6, continuing with a DVD release on September 16.