The Future of God

Can God be revived in a skeptical age? What would it take to give people a spiritual life more powerful than anything in the past? Deepak Chopra tackles these issues with eloquence and insight in his latest book, The Future of God. 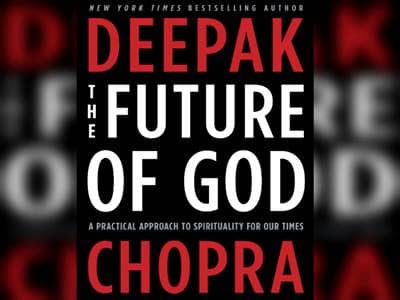 Every time God falters, he comes back tomorrow. When he returns, he doesn’t look the same as before. The faithful have dressed him in new clothes; he’s undergone a personality makeover. Looking over our shoulder, we have no difficulty distinguishing Jehovah, whose favorite command is “Smite!” from the God of Christianity, whose favorite command is “Love” (but leaving wiggle room for a good deal of smiting). It’s harder to see how God will look in the future, however. Almost every divine attribute has been extracted, like silk threads pulled from a cosmic tapestry until the fabric is bare. What’s left after you’ve tried vengeance, love, and everything in between?

In the West one aspect of God has been ignored, a unique trait that is shared with nothing else in creation. It’s not that God sees and knows everything. It’s not that he is infinitely loving and all powerful. Religion has tested all those qualities, only to end in disappointment. It’s inspirational to read, “The Lord is my shepherd, I shall not want,” until the day comes when you have many wants and God does nothing about them. But something has been missed that makes God absolutely unique: He cannot be put into a box. As curious as this sounds, it’s the most important thing about God. It holds the clue that will lead us to true knowledge. Quite literally, to find God, you must go outside the box.

There are two kinds of boxes that we put things into. One is physical. If you want to study a horned toad, a quark, or a star, you first isolate it as a physical specimen. Sometimes the box isn’t literal. No one can containerize a star. But a star is perceived as a thing, an object that sits alone, ready to be studied. God fits into no such box, although the old Sunday-school image of a patriarch sitting on his throne above the clouds attempts to do that.

The other kind of box is mental. In it we put ideas and concepts. Freedom is a concept, and so is enlightenment. Even though they aren’t physical, we still set ideas aside to think about them. A very broad concept that applies to everyone on Earth, such as human nature, still fits into a box, ready to be studied like a star or a quark. It doesn’t matter that human nature is invisible and very tricky to define. It has to have boundaries that make it different from, say, Buddha nature or the nature of a wolf—the boundaries are its box.

God has no boundaries, however—not if he is omnipresent, which means “everywhere at once.” (He falsely puts God into a box labeled “masculine,” so it’s worth repeating that we’re using a gender only for the sake of convenience.) Trying to think about him means trying to think about everything at once, which is clearly impossible. People try to get around this impossibility by breaking down God into smaller parts, the way a mechanic breaks down a car engine or a biologist a heart cell. But what works with car engines and brain cells doesn’t work with God. Let’s say you want to talk about God’s love, which people often do. “God’s love is eternal and infinite. When I get to heaven, I will bask in his eternal love”: This is a religious sentiment that millions of people might say and hope is true. But in fact the words have no meaning.

Infinite is being used to mean “very, very big,” but infinity cannot be conceived of that way. Our minds think in finite terms. We look around and see that everything in nature has a beginning and an end. Infinity doesn’t. It lies outside our ability to count; it is incompatible with how our minds work in linear time. The only practical use for the word infinite is to denote an abstract mathematical concept. We can’t meaningfully say that God is very, very big when size doesn’t apply to him.

Eternal is being used in the sentence to mean “a very long time.” But eternity isn’t linear the way that hours, days, and years are. Eternity is infinity applied to time. Therefore the same objection that makes infinity inconceivable applies to eternity. The mind can’t wrap itself around time without beginning or end. We can’t meaningfully say that God has been around a long, long time when time itself doesn’t apply to him.

Love is being used to mean the kind of deep affection and caring that is human love. But God’s love doesn’t pick and choose, so it applies to serial killers, Adolf Hitler, Chairman Mao, and all other monsters in history. It applies to all criminal acts as well as to holy acts. Therefore divine love is more like a natural force field—gravity, for instance—than a human emotion. Such love can’t be expressed into human emotional terms.

I didn’t pick a trick sentence here but a fairly typical one. Nor was the wording sloppy, needing a copy editor’s red pencil to fix it. Infinite, eternal, and love simply aren’t the right words. They force God into a mental box where he won’t fit. There is nothing to be done about it. Yet the journey to know God begins where words fail us. We can ditch the scriptures, sermons, and inspirational writings that have failed us. Faith brought us to a level playing field where God is a real possibility. Beyond faith lie experiences that cannot be put into words. Yet the path is real, and the ability to make the journey is imprinted in the human mind itself.

Reprinted from The Future of God Copyright © 2014 by Deepak Chopra. Published by Harmony Books, an imprint of Random House LLC.

DEEPAK CHOPRA is the author of more than 80 books translated into over 40 languages, including numerous New York Times bestsellers in both the fiction and nonfiction categories. Visit him at DeepakChopra​.com