The Angel and the Priest

“She was the Angel of Theresienstadt!” This is what I’d always heard about my great-aunt Klare, whose ministrations to others, during two years in that concentration camp, was the stuff of family legend. 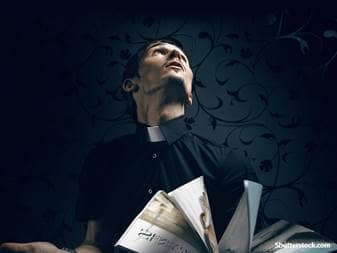 “She was the Angel of Theresienstadt!” This is what I’d always heard about my great-aunt Klare, whose ministrations to others, during two years in that concentration camp, was the stuff of family legend. The quote came from Leo Baeck, chief rabbi in Germany at the time, and also an inmate at Theresienstadt. Angel or not, Klare’s choices, and the unconventional life she and a Catholic priest created in post WWII Germany inspired me so much, that I researched and wrote the novel Even in Darkness about them.

More importantly, their relationship informed my understanding that love, devotion and belief, as redemption for pain and suffering, can enter our lives in unexpected ways, crossing boundaries of religion, generation and societal expectation. Imagine for a moment an ordinary middle class Jewish woman with a husband and two children, from a town in northern Germany in the first half of the 20th century. Now imagine that she survives two world wars and the Holocaust, only to remain in Germany for the last half of her life in a transcendent relationship with a Catholic priest half her age. Those are the basic facts of my great-aunt’s life and form the narrative of Even in Darkness. The fifteen years I spent interviewing, translating letters, traveling to Europe and elsewhere to research this story revealed the elements of that relationship that made it so extraordinary.

First, both Klare and Ansel, the priest, were people of deep faith. Ansel was raised in a Catholic orphanage, and studied philosophy and Old Testament theology. After a near-death experience, he resolved to become a priest. Klare, a secular Jew, came to know and be inspired by Leo Baeck’s message of survival through faith, a message Klare used to survive and help other prisoners in the concentration camp. When life brought them together, Klare never renounced her Judaism, and Ansel deepened her understanding of her faith through his years of studying and training. Similarly, Klare learned to understand and facilitate the Catholic practices that were Ansel’s work and life. No mere compromise, this was an active joining of spiritual beliefs. Second, friendships were integral to Klare and Ansel’s relationship. As unlikely as it seemed, they were first and foremost each other’s best friends.

They met through a close friend of Klare’s. Their bonds of friendship with others, both individual and together, were deep, lovingly cultivated, and abiding. Third, perhaps because each had lost so much, and so many, Klare and Ansel learned to nurture the best in each other, and seemed to spend their relational time supporting and celebrating the positive aspects of what the other had to offer. Their considerable wit and humor insured that smiles and laughter punctuated most interactions. They appeared not to “sweat the small stuff” with the result that the lives they offered to the observer and, I believe, to each other, focused on what was helpful, courageous, interesting, and humane. Small wonder that those who came in contact with them, from the lowliest waiter, to the most elevated clergy, were drawn to the joy and fascination in which they held each other.

Finally, as deeply attached and devoted as they were to each other, their activity around other people was nearly always directed outward. Only after delivering one’s own report, could one ask after Klare’s and Ansel’s lives and thoughts. They had the uncanny knack of making each person feel important and valued. Their kind consideration made their sitting and dining rooms the most welcoming of destinations, and many crossed continents and oceans to visit the small rectory in northern Germany.

Klare and Ansel thrived as individuals and together not because they violated boundaries, but because they reached across their differences in age, religion and background to forge the strongest of bonds, nurturing the best of who they were as individuals and summoning their faiths, friendships, and love to create a truly inspirational connection; one which they generously shared.

Barbara Stark-Nemon, author of the acclaimed novel Even in Darkness, lives, writes, gardens, sails and does fiber art in Ann Arbor, and Northport, MI. You can learn more about her fascination with family stories at www.barbarastarknemon.com.