Shia LaBeouf Discovers God During the Filming of ‘Fury’ 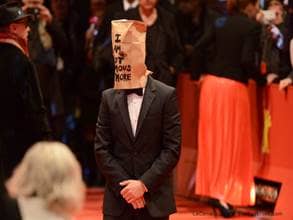 Actor Shia LaBeouf is known for his colorful and dangerous behavior.

But reportedly on the set of his latest film “Fury” he had discussions with co-star Brad Pitt, who was raised as a Christian, and Director David Ayer about religion according to Interview Magazine this month.

“Brad comes from a hyper-religious, very deeply Christian, Bible Belt life, and he rejected it and moved toward an unnamed spirituality. He looked at religion like the people's opium, almost like a Marxist view on religion.”

Ayer is a believer and was instrumental in LaBeouf’s discovery and what he deemed a “surrender of control.” What a turn of events for the actor who claimed he hates fame, and walked the red carpet in Berlin with a paper bag over his head with cutouts for his eyes. Scribbled in black marker on the bag was “I am not famous anymore.”

He later came out to apologize for his behavior admitting his mother called him saying ‘he was embarrassing her.’

Was this just a publicity stunt, or just a fleeting moment for LaBeouf? He told the publication he discovered the Lord, it is real to him. They were not just pretty words.

“I found God doing “Fury.” I became a Christian man, and not in a f****bull**** way—in a very real way. I could have just said the prayers that were on the page. But it was a real thing that really saved me. And you can't identify unless you're really going through it. It's a full-blown exchange of heart, a surrender of control.”

LaBeouf played Boyd 'Bible' Swan in the film that was released in October. This was his first role playing a man of faith.