“No government should impose land use regulation in a matter that imposes substantial burden on the religious exercise of a person.” - RLUIPA Act 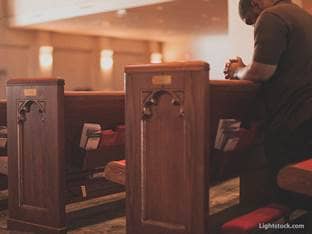 Congress passed the Religious Land Use and Institutionalized Persons Act to end the egregious acts by prison institutions for curtailing religious liberties in 2000. The statue protects the rights of prisoners, of all religions from restrictions such as banning religious books, religious diets, Bible studies, rosary beads, yarmulkes, or sacred holidays that included prayer and fasting.

By imposing strict rules on religious activities, supporters of the statue believed that taking away ones right to seek God is dehumanizing regardless of the denomination. Jews, Muslims, Christians, Catholics, and Pagans were all forbidden necessary objects needed to maintain a religious life behind bars. When people are incarcerated they so lose privileges.

“No government should impose land use regulation in a matter that imposes substantial burden on the religious exercise of a person.”

In 2011, a Wiccan prisoner sued the state of Minnesota for violating his religious rights by forbidding him to use incense during rituals, and confiscating religious material he receives in mail. A Texas prison was accused of violating the rights of Muslims with regulations that prohibit them from exercising their faith. In order to hold services there needs to be a certain number of volunteers and followers to hold services. The U.S. Supreme Court recently ruled that practicing Native Americans can keep their long hair as it is a freedom of religious expression. This reversed the lower courts decisions that upheld that Native Americans must keep hair short.

George Holt (Abdul Muhammad) is an inmate in Arkansas, and was prohibited from growing his beard a ½ inch for his Muslim faith, and the no-grooming policy was infringing on his religious freedom. The prison contended that the policy is enforced so inmates can’t hide contraband.

In a 9-0 decision Justice Samuel Alito, wrote religious rights were violated. “We readily agree that the Department [of Correction] has a compelling interest in staunching the flow of contraband into and within its facilities but the argument that this interest would be seriously compromised by allowing an inmate to grow a 1/2 inch beard is hard to take seriously.”

Studies suggest that there is a 12 percent recidivist rate when prisoners practice faith and decreases as religious practices increase. It’s beneficial to the state as most religious programs are staffed with volunteers and costs the state nothing, the Becket Fund ascertains. Ministries like Prison Fellowship, founded by Chuck Colson, has over 15,000 volunteers who teach bible studies, seminars, life skills, and support.

“The effect of such religious involvement on a person’s likelihood of being rearrested within three years of release from prison surpasses any effect that has been shown from most secular programs designed to prepare prisoners for life after prison,” Becket Fund reported in 2014.

The National Institute of Justice reported that within three years of release there is a 67.8 percent recidivism rate.