In a recent address to Latin American and Asian social advocates, he stated, "The monopolizing of lands, deforestation, the appropriation of water, inadequate agro-toxics are some of the evils that tear man from the land of his birth. Climate change, the loss of biodiversity and deforestation are already showing their devastating effects in the great cataclysms we witness." 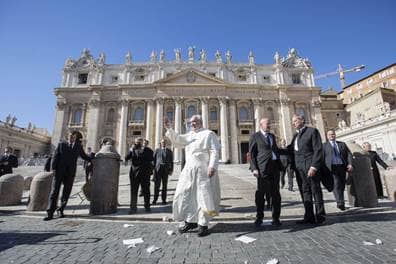 Be praised, my Lord, for Sister Earth, our Mother, who nourishes us and sustains us. - St. Francis of Assisi, The Canticle of Creation

Like the saint whose name he adopted when he took office, Pope Francis values the earth and its resources, of which we are all stewards, and he’s prepared to do something about it. In October 2014 he stated, "An economic system centered on the god of money needs to plunder nature to sustain the frenetic rhythm of consumption that is inherent to it.”

In that light, he plans to issue an encyclical, or papal letter to a group of bishops, in 2015 regarding issues surrounding climate change. This will be only the second encyclical Pope Francis has published. The first was titled “Lumen Fidei” (“Light of Faith”) and was released in June of 2013.

Pope Francis has made no secret of his opinion on global warming. In a recent address to Latin American and Asian social advocates, he stated, "The monopolizing of lands, deforestation, the appropriation of water, inadequate agro-toxics are some of the evils that tear man from the land of his birth. Climate change, the loss of biodiversity and deforestation are already showing their devastating effects in the great cataclysms we witness."

Yet, the pope has often stated strong opinions on various matters in public but backed off and taken a more conservative stance in official Church publications.

As Cristina Odone, former editor of the Catholic Herald, observed, “Francis achieved miracles with his compassionate, off-the-cuff comments that detoxified the Catholic brand. He personifies optimism — but when he tries to turn this into policy he isn’t in command of the procedures or the details. The result is confusion.”

Understandably, the mere news of the impending climate change encyclical has already ignited a firestorm of controversy. Left-leaning Catholics are hoping that the pope will attend the UN Climate Conference in Paris later this year and persuade the attendees to take action in reducing the risks of global warming and other environmental concerns.

Dan Misleh, executive director of the Catholic Climate Covenant, is excited by the pope’s latest focus. "There's never been an encyclical just on the environment. It's clear something like this is needed to move, especially policymakers, but even the church.”

On the other hand, conservative groups are less than thrilled with the pontiff’s focus on highly politicized environmental issues. Cardinal George Pell, who oversees the Vatican budget, gave his opinion in a lecture on October, 2011. “Are there any long term benefits from the schemes to combat global warming, apart from extra tax revenues for governments and income for those devising and implementing the schemes? Will the burdens be shared generally, or fall mainly on the shoulders of the battlers, the poor?”

Calvin Beisner, spokesman for the conservative Cornwall Alliance for the Stewardship of Creation, is a bit more blunt. “The pope should back off,” he said. “The Catholic church is correct on the ethical principles but has been misled on the science. It follows that the policies the Vatican is promoting are incorrect. Our position reflects the views of millions of evangelical Christians in the US.”

Time will tell how this all plays out. However, the pope does has a heightened sense of urgency, an indicated in a message to Peru’s environmental minister on December 11th. “The time to find global solutions is running out. There is therefore a clear, definite and urgent ethical imperative to act. The effective fight against global warming will be possible only with a responsible collective response that is free from political and economic pressures.”

Peggy Bowes is a former Air Force pilot and the author of The Rosary Workout and Tending the Temple.