Pope Francis is known as the People’s Pope and continues to make strides to break barriers and tear down walls of judgment. 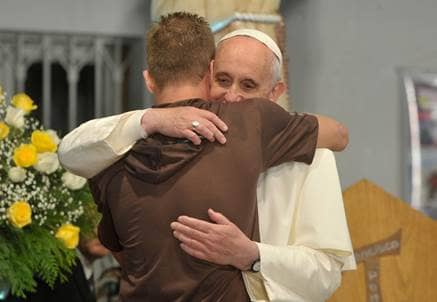 On his upcoming trip to Israel Pope Francis will be joined by his close friend, Argentinian Rabbi Abraham Skorka, as well as Argentinian Muslim leader Omar Abboud.

The inclusion of the Jewish and Muslim leaders marks the first time leaders of other faiths will be included on an official papal delegation. Pope Francis hopes to show the normality of having friends of other faiths. The Pope believes that we can befriend others who share different views than us.

Skorka, whose friendship with Francis dates back to their days as the leaders of their respective communities in Argentina, last September spent several days in the Vatican together with the pope over the Sukkot holiday. The two have also authored a book together called On Heaven and Earth, which discusses Jewish and Catholic issues.

The Vatican also said Pope Francis will not the use of bulletproof vehicles known as the “Pope mobile” during his trip, and will use a normal car in order to be closer to the people. The Pope believes that he is able to reach more people by traveling as a normal person.

Pope Francis is known as the People’s Pope and continues to make strides to break barriers and tear down walls of judgment.