Muslim prayer at the National Cathedral is part of a growing trend in tolerance. 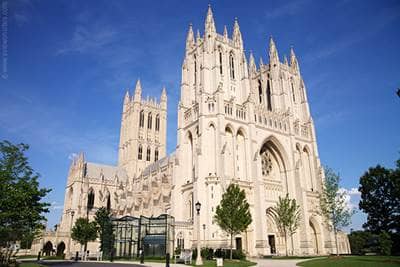 On November 14, 2014, Washington DC's National Cathedral hosted Muslim Friday prayer for the first time. The National Cathedral is an Episcopalian church, site of the funerals of US presidents Dwight Eisenhower, Ronald Reagan, and Gerald Ford, and memorial services for Harry Truman and Richard Nixon. President George Bush spoke there after the 9-11 terror attacks. Moon rock is displayed in a stained glass window in the cathedral. The Cathedral has received federal funds.

The midday, "jummah" prayer, followed by a sermon, was attended by approximately one hundred invited guests only. Non-invitees were barred. Muslim leaders supplied prayer carpets, which were strategically located on the floor to avoid any view of a cross. Muslims may not pray within sight of crosses. Organizer Ebrahim Rasool said that the event would discourage "Islamophobia" and allow "a world in which all are free to believe."

Sponsors of the event include CAIR, ISNA, and the ADAMS Center.

Christine Weick, a fifty-year-old woman from Michigan, interrupted the Muslim service by entering the designated area and saying loudly, "Jesus Christ died on that cross. It is the reason we are to worship only him. Jesus Christ is our lord and savior. We have built enough of your mosques in this country. Why don't you worship in your mosques and leave our churches alone?" Weick was immediately and forcibly ejected from the cathedral by two men.

DCist, a news site devoted to Washington, DC, condemned Weick's intolerance. "Because love, respect and understanding is too much of a concept for some people to understand, a person interrupted the service. Of course," DCist reported, with disgust.

Other commentators echoed DCist. The National Cathedral hosting jummah prayer is a sign of "tolerance." Anyone objecting is "intolerant." After all, as many pointed out, the National Cathedral is meant to be just that – national. In its own words it is to be "a house of prayer for all people."

In fact, Muslim prayer at the National Cathedral is part of a growing trend in tolerance. Truly, those who first espoused the theory of universal human progress were correct. We are all evolving into a more peaceful, civilized breed of humanity. Other news items suggesting that we as a species are advancing towards perfection include the following.

Recently Eugenie Scott of the National Center for Science Education voiced support for the discussion and teaching of Intelligent Design alongside Darwinian Evolution. This is a surprising turnaround. Back in 2005, Dr. Richard Sternberg, an editor of a scientific journal affiliated with the Smithsonian Institution, accepted for publication a peer-reviewed article written by a proponent of Intelligent Design. Given that Sternberg himself is not a supporter of Intelligent Design, National Public Radio asked him why he allowed the article to be published in a journal he edited. He replied, "Because evolutionary biologists are thinking about this. So I thought that by putting this on the table, there could be some reasoned discourse. That's what I thought, and I was dead wrong."

Alas, Sternberg was subjected to harassment. His colleagues circulated career-destroying rumors about him. They took away his master key and denied him access to research materials. According to the Office of Special Counsel, which protects federal employees from reprisals, Eugenie Scott's National Center for Science Education helped the Smithsonian to "outline a strategy to have [Sternberg] investigated and discredited." When questioned about her participation in this witch hunt, Eugenie Scott told NPR that "Life is not fair."

That Scott is now in favor of the discussion of Intelligent Design in high school and college classrooms, in faculty lounges and in the pages of scientific journals is a sign of increasing tolerance.

Yet another sign that we are entering a New Age of human perfection. Planned Parenthood has recently announced that it will allow pro-life campaigners into its offices. Those supporting Muslim prayer at the National Cathedral often argue, "Both Christians and Muslims pray to the same God." Well, both abortion opponents and supporters address the same demographic – pregnant women. Perhaps Planned Parenthood has decided that women really should have access to full information before they make one of the most important decisions of their lives. Perhaps women really should be able to see ultrasound images of the fetuses that they carry, and perhaps they should be fully informed about adoption and other options.

No, the progress doesn't stop there. In the past, organized Atheists made headlines by opposing the placement of the Ground Zero Cross at the World Trade Center Memorial. The cross was indisputably a central artifact of the 9-11 terror attacks. Firefighters, police officers, and other rescue workers congregated around the cross, attended mass under it, and carved significant messages into its surface. You can't tell the story of 9-11 without including the Ground Zero Cross. But that's exactly what organized Atheists demanded that America do. Atheists went to court again and again to demand that the Memorial simply erase the Ground Zero Cross, in the same way that Stalin erased Trotsky from photographs after Trotsky fell out of favor. But now, in a new move for tolerance, Atheists have announced that representatives Richard Dawkins, Sam Harris, and Bill Maher will travel to the 9-11 Memorial and lay flowers at the foot of the cross.

Tolerance is breaking out all over, it seems. In summer, 2014, Kathleen Hermsmeyer, Superintendent of Springs Charter School in California, became embroiled in controversy. A school employee told a parent to remove from school shelves "all books with a Christian message, authored by Christians, or published by a Christian publishing company." Expunged books included "The Hiding Place," the memoir of Corrie ten Boom, a woman who rescued Jews and was imprisoned in a concentration camp for doing so. Her father died after arrest and her sister died in the Ravensbruck concentration camp. Ten Boom is typical of rescuers who acted on Christian beliefs. Others include Maximilian Kolbe, Jozef and Wiktoria Ulma, and hundreds of Polish nuns. Theirs is an essential part of Holocaust history. Even so, the books telling their story needed to be removed from school shelves – until now. Suddenly it's okay to read "The Hiding Place" at Springs Charter School.

The most stunning evidence of the new tolerance sweeping the globe comes from a belt of nations stretching from Morocco in the west to Indonesia in the east. Suddenly nations that had previously tortured people for mere possession of a Bible are inviting open discussion of Christianity. Lands where Christians have not been allowed to hold Sunday services for over a millennium now host Catholic mass. Where marriage between a Christian man and a Muslim woman had been outlawed, suddenly, there are joyful open displays of affection.

The alert reader recognizes that, of the above listed accounts of tolerance, only one is a report of a true event. The only true event is that the National Cathedral did hold Muslim services on Friday, November 14. The other listed events are unthinkable. That they are unthinkable reveals that the word "tolerance" used in reference to jummah prayers at the National Cathedral is Orwellian doublespeak. Those calling for Christian tolerance desire neither Christians nor tolerance. Rather, they want Christianity to commit a physician's assisted suicide administered by Political Correctness. Islam, to them, is a useful tool to achieve this end. Archimedes famously said, "Give me where to stand and I will move the earth." He could move it, he insisted, with the right lever. Islam is the lever that Christophobes would use to eliminate Christianity. One might scoff, until one remembers that Syria, Turkey, and Egypt were once central to the Christian world.

Of the world's dominant religious systems: Judaism, Hinduism, Confucianism, Buddhism and Islam, Islam is unique in its relationship to Christianity. Mohammed died six hundred years after Jesus. Mohammed appropriated garbled, popular elements of Paganism, Judaism, and Christianity into his new book – the Koran – and his new system – Islam. Mohammed altered these elements to suit his own needs. These alteration might change; once Muslims worshipped facing Jerusalem, a city sacred to Jews and Christians. Later they faced Mecca, a Pagan holy site. Moses and Mary are both characters in the Koran, but highly distorted ones. Moses, who lived over a thousand years before Mary, becomes Mary's brother. Islam's distorted picture of Jesus is of great consequence. Christianity insists that Jesus is the son of God, and that he died on a cross. Islam insists that "Isa ibn Maryam" – that is, son of Mary, a mere woman – is not the son of God, and that he did not die on a cross. In fact, Isa ibn Maryam will someday return to destroy all crosses, kill all pigs, and wipe out Christianity. The Christian Bible contains material that contradicts Mohammed's teachings. For this reason, Islam must denigrate the Christian Bible as "corrupt." In their daily prayers, Muslims repeatedly petition God not to be like "those who have gone astray," i.e., Christians.

Those arguing for Muslim prayer in the National Cathedral argue for nothing less than the eclipse of Christianity and its replacement in the minds, hearts and souls of its adherents with something entirely other. Given that Christianity is one of the foundations of Western Civilization, this matter is of concern to all.

Danusha Goska is the author of Save Send Delete