Muslims, Christians and Jews are Keys to Peace

After daring to ask questions relating to Islam and women, Frank Romano was wrongly accused by Muslim extremists of being a Zionist spy and was imprisoned. Here is what he learned about peace in the Middle East. 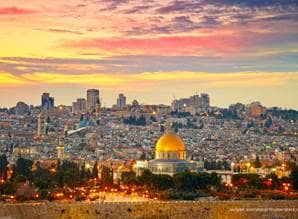 After daring to ask questions relating to Islam and women, Frank Romano was wrongly accused by Muslim extremists of being a Zionist spy and was imprisoned. He learned these extremists don't want peace, but there are others who do, in America, and overseas.

"There is definitely something positive happening right now in the US,” says Dr. Romano.

"We're realizing a favorable evolution in US public opinion. Americans are better informed and I believe this will lead to the American people demanding a louder voice on issues where the Middle East peace is concerned.”

Beliefnet: What is the outlook for the current peace process in the Middle East?

FR: After travelling back and forth from Paris to the Middle East for the last 10 years, I’ve concluded that one of the keys to peace, notably between Palestinians and Israelis, is the grassroots movement that brings those people together. Our political and religious leaders have sadly failed to bring about a durable peace, to do what’s right; so it’s time for the people to step up. I however profess the importance of taking action for peace, not just talking about it. So marching and dialoguing in Israel and Palestine is taking steps, but it doesn’t end there.

I support the groups that rebuild of buildings destroyed during the conflict between Israelis and the Palestinians. But the rebuilding must take place on both sides of the wall, in Israel as well. I also support the replanting of olive trees that had been uprooted to make way for the walls and part of the confiscation of land engaged in by Israel in the West Bank. Also walking the talk includes street interfaith events including demonstrations for peace. A year ago, I organized and participated in two Interfaith Peace Marches, one in Jenin, West Bank, the other in the Old City, Jerusalem. I am organizing more interfaith events in the Middle East scheduled for the Spring of 2016. Someday we will be able to extend our interfaith peace activities to Gaza. As such, through many grassroots interfaith groups working together, helping to profoundly bond, in particular, Muslims, Christians and Jews are a key to peace. And I do see progress, very slow progress!

Beliefnet: You’ve were wrongly imprisoned by extremists, what did you learn about them, and take from that experience?

FR: During my interfaith work in the Holy Land, everyone including orthodox and extremist followers of religions participate. My experience living with a fanatic Islamic cult in Morocco namely helps me understand fanatic groups since I was subject to the same type of brainwashing that they have been submitted to since birth. That also helps me have compassion for extremists. That allows me penetrate through a hard crust, a layer that would have prevented me through fear and ignorance from trying to penetrate if I had not lived with the cult in Morocco.

Beliefnet: What have you learned from the interfaith community?

FR: I believe that the fundamentalist approach can be tempered by a more understanding, open one. I try to eliminate the word tolerance in everything I do since the term “tolerate or tolerance” makes reference rather to the concept of “putting up with” something as opposed to engaging in true understanding from which acceptance and love naturally flows. Dr. Romano is a lawyer, author, speaker and professor of law, literature, history and philosophy of law, and continues to be an advocate for peace in the Middle East.

For more information on Dr. Romano's book or his ongoing drive for peace, please visit his website.