A life-size version of Noah’s Ark is being built in Williamstown, Kentucky. 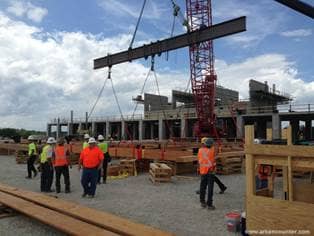 A life-size version of Noah’s Ark is being built in Williamstown, Kentucky. Wooden bents weighing an estimated 25,000 pounds each are being constructed by Amish carpenters over the several weeks, according to a press release.

The project is the brain child of Answers in Genesis president and CEO, Ken Ham. Ham is the founder of the Creation Museum, and has raised $19,795,473 of the 29 million-plus needed for the Ark Encounter project.

Funds raised are from private donations, memberships and bonds. The Noah Ark theme park is expected to open regardless of what the critics said, Ham wrote on Facebook in April.

“Despite all the naysayers, and the enormous amount of false information certain people and organizations have spread about this project — it is moving ahead nicely toward the opening in 2016. We just praise the Lord for this.”

Ham, a creationist, has drawn criticism for challenging scientists on evolution, and opened the Creation Museum in 2007 in Petersburg, KY. The museum’s objective is to teach the Bible events using theater, Biblical characters and exhibits.

He told the local press that all people are welcomed to enjoy the theme park and “we’re not going to be forcing them to believe our message, we don’t do that. They’re going to have a great experience regardless of whether they agree with us or not.”

The ark is expected to be 510-feet-long, and will open next summer. Readers can learn more by visiting www.ArkEncounter.com.