Kim Davis and the Freedom of Religion

The Kim Davis situation raises interesting questions about the meaning and practical effect of the freedom of religion. 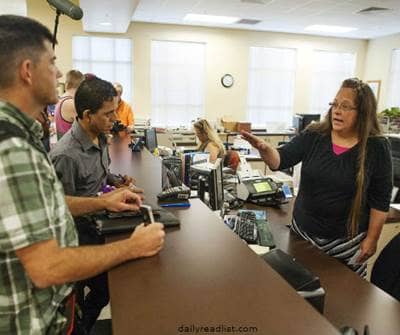 The Kim Davis situation raises interesting questions about the meaning and practical effect of the freedom of religion. Although, for reasons that I will explain, the issue today is one of public policy, rather than constitutional law, the evolution of constitutional principles in this realm is illuminating.

The First Amendment forbids government to make any law "prohibiting the free exercise" of religion. At its core, this guarantee forbids government from intentionally interfering with the freedom of individuals to practice their religion. Thus, the free exercise principle at least presumptively forbids the government to enact laws expressly prohibiting Muslim women to wear burkas, expressly prohibiting Jews to circumcise their male children, or expressly forbidding Catholics to use sacramental wine. Such laws are paradigmatic violations of the free exercise principle, because their very purpose is to restrict the religious practices of particular faiths.

In the incidental effects situation, a law that is not otherwise problematic on its face is claimed to be impermissible because, in application, it incidentally interferes with some individual's asserted "rights." This happens all the time.

As common sense would suggest, in all of these examples the individual demanding the exemption will lose. Put simply, and except in truly extraordinary circumstances, the Supreme Court does not look kindly on incidental effects claims in the free speech context.

Why is this so? There are at least four pretty good reasons. First, once one opens the door to such claims, every tomdickandharry will assert them. "I robbed that guy so I could give money to my favorite presidential candidate -- Donald Trump." "I parked illegally so I could go to the bookstore." "I was naked at the beach so I could protest laws against nudity." And so on.

Second, in such circumstances, it would be next to impossible for courts to determine in each instance which free speech claims are sincere and which are a sham. It all rests in the mind of the actor, and everyone who does anything illegal would be tempted to cook up a free speech explanation. Sorting it out would be a fact-finding nightmare.

Third, even if a particular a claim is in fact sincere, and even if the individual did in fact violate the law in order to communicate, it would be daunting, indeed, to figure out in each instance whether the individual's free speech interest is sufficiently important to override the legitimate reason for the law. Is speeding to get to a lecture sufficiently "important" to justify speeding? Is being naked on a beach to protest nudity laws sufficiently "important" to justify the nudity?

Fourth, in most of these situations, with just a little creativity, the individual claiming the exemption could have expressed herself in some other manner, without violating the law. In such circumstances, the denial of an exemption does not significantly interfere with free speech.

For all of these reasons, the Supreme Court has consistently looked skeptically on claims that incidental effects on free speech violate the First Amendment. Such exemptions are granted only in truly extraordinary circumstances.

For similar reasons, the Supreme Court has generally -- though not always -- been similarly skeptical of incidental effects claims in the free exercise context. In 1878, for example, George Reynolds, a Mormon, claimed that a federal anti-polygamy law infringed his right to the free exercise of his religion, because Mormonism called for polygamous marriage.

The Court denied the challenge, explaining in no uncertain terms that to exempt individuals from criminal prohibitions on account of their religious beliefs would make "the professed doctrines of religious belief superior to the law of the land, and in effect ... permit every citizen to become a law unto himself." In short, laws having incidental effects on religious freedom, like laws having incidental effects on free speech, were presumptively constitutional.

That remained the law until the 1963, when the Warren Court reconsidered the question. Seventh Day Adventist Adell Sherbert claimed that her free exercise rights had been violated when she was denied unemployment benefits because her religious beliefs forbade her to work on Saturdays. The Court held that the government could not require Sherbert to work on Saturdays in order to be eligible for unemployment compensation, because the state's interest in applying the law to her was not sufficiently weighty to overcome her right to the free exercise of her religion.

Then, in 1990, in Employment Division v. Smith, the Supreme Court reversed course once again. Galen Smith was fired from his job because he had ingested peyote for sacramental purposes at a ceremony of the Native American Church. He was then denied unemployment compensation because he had been terminated for employee-related "misconduct." He maintained that the denial of unemployment benefits to him violated his rights under the Free Exercise Clause.

In an opinion by Justice Antonin Scalia, the Court jettisoned its earlier doctrine and held that Smith was not entitled to an exemption. In effect, the Court reinstated the incidental effects doctrine as it had first been enunciated by the Court more than a century earlier in the polygamy case.

Whatever one thinks of Smith as a constitutional decision, it does not resolve the larger social question. Even if something is not unconstitutional, it might still be bad public policy. Indeed, in the years after Smith, a broad coalition of groups as diverse as the ACLU and the National Association of Evangelicals came together to enact legislation at both the federal and state levels that presumptively prohibits government from disadvantaging an individual for acting on his religious beliefs even when the applicable law has only an incidental effect on his behavior.

The ultimate question is whether this policy can in fact be pursued in a manner that accommodates sincerely-held religious beliefs without creating so many problems of implementation, and so many incentives for false claims, that the costs of the policy outweigh its benefits.

The answer, of course, is that for the reasons noted earlier, the doctrine might just be too complicated to implement in a predictable, sensible, even-handed, and fair-minded manner. The plain and simple fact is that the doctrine invites all sorts of abuse and sham claims, and compels judges and other government officials to make complex and potentially offensive judgments about the content of religious belief, both for the religion and for the individual.

On the other hand, the virtue of such a doctrine might be not only that it respects sincere religious beliefs, to the extent it can discern them, but also that it can protect members of minority religions. In the real world, the members of mainstream religious groups will rarely, if ever, find themselves in need of this principle, because those who make the laws will almost always carve out explicit exceptions for them.

A doctrine that permits courts to recognize exemptions even for minority religions thus offers an important safeguard of equality and even-handedness in an otherwise predictably unequal and unjust approach to the legislative recognition of explicit legislative exemptions.

In the end, then, it is fair to say that, as a general matter, there is no obvious "right" answer. This is a difficult issue. There is a "right" answer, however, in the Kim Davis situation. Indeed, her case is not even a hard one. A public official, who acts as an agent of the government, simply cannot place her own religious beliefs above those of the constitutional obligations of the state and the constitutional rights of our citizens. Davis should have found a way to reconcile her personal religious beliefs with her official responsibilities, or she should have resigned.

Davis is the moral equivalent of the elevator operator in a government building who, for her own religious reasons, refuses to let gays and lesbians ride in "her" elevator, which is the only one in the building. This, quite simply, she cannot do.

Geoffrey R. Stone is the Edward H. Levi Distinguished Service Profession of Law at the University of Chicago.

more from beliefnet and our partners
Geoffrey R. Stone