Is This The Actual Face of Jesus?

In the upcoming original CNN series, Finding Jesus: Faith, Fact, Forgery, The Shroud of Turin is a linen cloth that some Christians believe is the actual burial cloth of Christ, bearing His image. Others have their doubts. 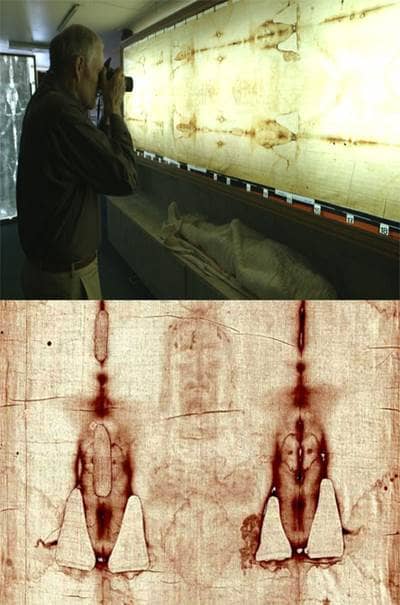 This March, the CNN series will delve into the archaeological findings surrounding The Shroud of Turin and travel as far as the Cathedral of San Salvador, in Spain, to answer this question once and for all. “We believe based on our research the Shroud is the authentic burial cloth of Jesus,” says series expert and Director of the Turin Shroud Centre of Colorado Dr. John Jackson. A physicist and professor at heart, he was first introduced to The Shroud by his mother at the age of 13 and quickly became fascinated with the relic but asserts his position is not to convince others of his conclusion but lead them to draw one for themselves, "The Shroud has both religious and scientific dimensions. This ignites curiosity on both sides of the spectrum. So we try to put it back on the people who come to our lectures to think for themselves rather than regurgitating our data and reasoning. It's much more effective that way." In 1978, Jackson led a team of scientists who spent five days intensely studying the Shroud for authenticity, before ultimately concluding it is genuine and not an artistic fake.

There is no concrete record of what Jesus looked like in the New Testament. The historical, contextual evidence suggests certain Jewish features: brown to dark skin, brown eyes and black or brown hair. While there are no contemporary descriptions at all, The Bible does tell us that after his death, one Joseph of Arimathea, wrapped Jesus’ body in linen and buried him on his family’s personal burial ground.

Fast forward to 14th century France, a shroud appears bearing the image of a crucified man before landing in Turin. Could this be the actual linen that Joseph wrapped Jesus in after the Crucifixion over 2000 years ago? The cloth seems to tell the whole story of Jesus’ death: the cross carried, the Crown of Thorns and the interwoven blood stains. Does the image captured represent the actual human likeness of Jesus Christ during His time on Earth? For millions of Christians, that answer is yes. The stains, they conclude, were left behind in this way from the face and body of the Son of Man.

Jackson encourages fellow Christians to look at the series through the lens of both science and faith, "Maybe the Shroud has something to say about the primordial concern [of life and death] we have as human beings. Therefore, I think it's incredibly important. Not that we base our faith on the Shroud, but that it can illuminate our faith in Christianity."

But there is some doubt. Almost a decade after Jackson's team concluded with certainty The Shroud's genuine origin, scientists at three separate laboratories refuted this, dating the samples of the Shroud to some point between AD1260–1390 which would make it a counterfeit.

Decide for yourself. Explore the CNN docudrama, Finding Jesus: Faith, Fact, Forgery, and uncover the mystery behind this controversial item of science and wonder. The series begins March 1st, check your local listings for times.