We don’t often think about the cross as a mission statement for our lives, but more and more, I’m realizing that’s what it is. Because perhaps the most astounding thing about Jesus’ death on the cross is who He died for. Sure, He did say... 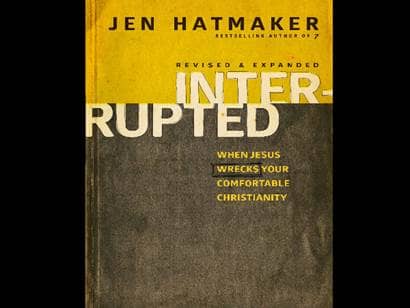 Used by permission of NavPress (an alliance of Tyndale Publishing House). All rights reserved.

Perhaps the most astounding thing about Jesus’ death on the cross is who He died for. Sure, He did say “for you” to His disciples (Luke 22:19). And granted, they were a mixed blessing and pretty much didn’t get Jesus until He was gone, but they loved Him. They were like big dumb animals who meant well and would fortunately one day transform from boys to men. These are people I like to think of Jesus dying for. You know, the ones died for their faith and such.

These are the types I want to be broken for too. If I’m picking whom I sacrifice for, I’m thinking future martyrs, gospel writers, and world changers. I love to pour into believers who take Jesus seriously. These are my people. Love. You.

This convinced demographic worked for me, or at least it was familiar. The pesky part came when the question burrowed deeper, since Judas was also part of the “for you” group Jesus referred to. And then I realized who Judas represented: those who would turn on me despite what I sacrificed or why.

If I didn’t grasp that then, I’m getting it now. It’s something like the homeless man I served a burger to in 105-degree heat who told me, “I hope this satisfies your white guilt for the day.” And the addict we supported in every conceivable way who went back to heroin and never called again. And the young man we helped out of the shelter who spent the money we gave him on a Bluetooth. And the believers who thought we were crazy.

This facet of broken and poured out for you? Not what I envisioned. This is where sometimes instead of a “thank you,” you get a “!%&# you.” Deep disappointment exists here. Betrayal resides here. Rip-your-eyes-out frustration lives here. Hooray! Anyone still want to join me?

This is one of the reasons I had detached from the margins, citing irresponsibility and recklessness and thanklessness. They’ll spend it on booze. Government is corrupt and shouldn’t be helped. Get off your lazy butt and get a job, and then we’ll talk. I was shockingly ignorant about the cycles of poverty and addiction. Nor did I even remotely understand the difference between empowering and enabling. Ignorant intervention is absolutely a contributing factor to cycles of oppression.

This is what God taught me through Judas at Jesus’ table, eating the broken bread that was His body: We don’t get to opt out of living on mission because we might not be appreciated. We’re not allowed to neglect the oppressed because we have reservations about their discernment. We cannot deny love because it might be despised or misunderstood. We can’t project our advantaged perspective onto struggling people and expect results available only to the privileged. Must we be wise? Absolutely. But doing nothing is a blatant sin of omission. Turning a blind eye to the bottom on the grounds of “unworthiness” is the antithesis to Jesus’ entire mission. How dare we? Most of us know nothing, nothing of the struggles of the poor. We erroneously think ourselves superior, and it is a wonder God would use us at all to minister to His beloved.

Jesus came to the foulest, filthiest place possible, a place full of ungrateful, self-destructive people who would betray Him far more than they’d love Him. He broke His body for rich people who would curse Him the second their prosperity was endangered. He poured His blood out for those who would take His Word and use it as a bludgeoning tool. He became the offering for people who would slander His name with ferocity, yet His grace was theirs for the asking until they drew their last breaths, even if all they could offer Him was a lifetime of hatred and one moment of repentance.

When Jesus’ followers asked what to do about the weeds in the harvest field, He said to treat them the same as the wheat, “because while you are pulling the weeds, you may root up the wheat with them” (Matthew 13:29). The risk of encountering a few weeds is not sufficient reason to avoid the whole field of human suffering, because I assure you, identifying with the wheat but not the weeds is a gross overestimation of our own station. The correct character to identify with here is the weed shown mercy, not the Savior capable of discerning the human heart. Our holy Savior advised us well: humans must treat the wheat and weeds the same. We are only qualified to administer mercy, not judgment, because we will pull up many a beautiful stalk of wheat, imagining him a weed.

Jen Hatmaker is the author of 7: An Experimental Mutiny Against Excess and A MODERN GIRL’S BIBLE STUDY series. With a heart for her generation, she speaks at conferences around the country and writes for numerous sites and outlets. She and her family are featured in an 8-episode HGTV series called "My Big Family Renovation," airing August 2014. She resides in Austin, Texas, with her husband, Brandon, and their five children. To learn more about Jen, check out her speaking schedule, and follow her blog posts, visit www.jenhatmaker.com.