I Do Believe in God...And Yet

When I was seven years old, I walked into my dad’s study at home one day and told him I wanted to follow Jesus. 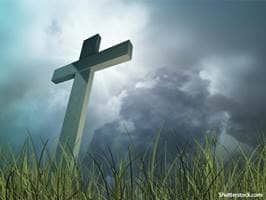 When I was seven years old, I walked into my dad’s study at home one day and told him I wanted to follow Jesus. I don’t remember why. It might have been fear of hell, it might have been a desire to spend eternity with my family, or it might have been guilt. I sat on his knee and had a conversation also now long forgotten. Then we pulled out my illustrated NIV children’s Bible, opened up to a blank page at the beginning, and wrote a profession of faith.

My childish hand wrote about my need for a savior and how I believed Jesus was my only hope and now my life would be His forever. From that day forward I have considered myself a Christian. I know I am a sinner. That much is obvious to anyone who knows me. I believe God is holy, so much so that He cannot abide sin in His presence. I believe I cannot do a single thing to purify myself enough to gain access to God. I believe that “God so loved the world, that he gave his only Son, that whoever believes in him should not perish but have eternal life.” And I believe in the perfect Son, Jesus, the only man who ever lived a life of perfection and thus was able to be the flawless sacrifice and bear God’s punishment for my sin and those of everyone else who believes. I believe Jesus rose from the dead and thus has shown Himself to be the conquering King who will one day return to “wipe away every tear” and reside in a newly created earth where “neither shall there be mourning, nor crying, nor pain anymore.” I have believed these truths almost all my life. And yet …

And yet I have committed sins that have deeply wounded others and nearly destroyed my relationship with Jesus. And yet I have looked Scripture full in the face and decided my way is better than God’s; I would rather be my own god. And yet I doubt the promises God gave even though He provided the surety: His beloved Son’s very life. My troubles are bigger than God’s love no matter what He says. And yet I am skeptical. I know what Scripture says and I know the arguments, but the questions stack up. Some people think, God says it, I believe it, that settles it. But it doesn’t settle it.

Did God really say it? I don’t really believe it. Nothing is settled. And yet my belief is weak. Or maybe it’s not there. Or maybe I don’t really know what belief means. What is belief? You have your own “and yet.” Maybe yours inserted itself before you even professed belief; all the claims of the Bible and this man, Jesus, are just too much to assent to. You struggle with questions of evil and pain and the existence of God. You are a skeptic, either willfully or because you just can’t help it. I cannot answer all your questions. I don’t think anyone on earth can. But answers exist. They are found in belief, with or without empirical evidence to back them up. I hope to show you that it’s worth it to risk believing. Or maybe your “and yet” is on the other end of the spectrum; you have so willingly followed Jesus that you have never raised a question about life’s hardships or God’s promises. You follow blindly but faithfully. But is this because you truly believe without doubt or because you fear where questions might take you? Are you afraid that questioning or even, gulp, doubting might open a Pandora’s box of sin and judgment? But what if belief isn’t blind faith and that questions, if asked well, are building blocks for stronger faith rather than stepping-stones away from it. If your “and yet” lies somewhere in the middle or is some combination of both you must explore belief from both ends.

Start by examining “I believe; help my unbelief,” the expression of a desperate man in Mark 9. These juxtaposed phrases represent the reality of every follower of Jesus no matter how mature, new, falling, or strong. We believe. And we don’t. We follow. We fail. We are weak, and we need help. No amount of belief moves us beyond “help my unbelief” – not in this life. Rather the stronger our belief, the more urgent our plea. I pray you will see the frailty of your belief and the strength of what you believe in. And I pray that belief will be more than an assertion; may it be a living thing in your soul that shapes and drives you in all you do.

This article is an excerpt from Help My Unbelief: Why Doubt Is Not The Enemy Of Faith , Barnabas Piper's forthcoming book (David C. Cook, July, 2015).