How Captain America Is Practically Biblical

God doesn’t seem to have much use for superheroes. In the Bible, he chooses ordinary guys for extraordinary work. 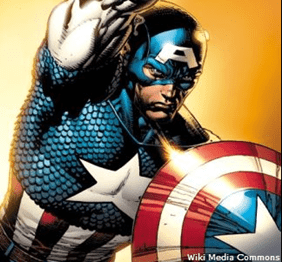 When Marvel’s Avengers assemble for Age of Ultron this May, moviegoers will be re-introduced to a bevy of practically divine beings: Tony Stark and his supercharged Iron Man suit; god-like Thor and his mighty hammer; Hulk and his mean, green, invincible anger. Fellow Marvelites Scarlet Witch, Quicksilver, and Vision are rumored to be joining the team, too — bringing with them their own daunting array of superpowers.

The man who leads this titanic team is, by comparison, just a little bit better than your average Joe — a heck of an Olympic athlete, but no Olympian god. He’s not the smartest Avenger. He’s not the fastest. He’s certainly not the strongest.

But when the chips are down and the whole world is assaulted by alien invaders or sentient robots, who calls the shots? Captain America, that’s who.

Funny what a little moral authority can do for a superhero.

When I wrote about superheroes in my book Burning Bush 2.0: How Pop Culture Replaced the Prophet, I divvied them into two basic groups: the folks who were basically born to be superheroes (think Superman) and the self-made superheroes who forged their own identity (think Batman).

Maybe the super part of Steve Rogers’ superhero came from a bottle. But the hero? He was already there.

In the Avengers team, you have both. God-like Thor was born special, thanks to his Asgardian DNA, though his abilities are augmented with his nifty hammer Mjolnir. Tony Stark (Iron Man) and Bruce Banner (Hulk) were both blessed with remarkable intellects, which they then used to create their own superhuman abilities (though, admittedly, Bruce would like to get rid of his).

By comparison, Captain America/Steve Rogers became a superhero almost by accident. He started out as a scrawny weakling — the sort of guy who’d get sand kicked in his face in those old-school Charles Atlas ads. He wasn’t born with a silver hammer in his hand or a bevy of extra brain cells in his noggin. Nor did he have the wherewithal to hone himself into a human juggernaut or fashion himself a special suit. No, his path to superherodom was quite different: the army gave Cap his superpowers.

“You’re a laboratory experiment, Rogers,” Tony tells him in the first Avengers movie. “Everything special about you came out of a bottle.”

But that’s not quite right, either. Steve Rogers might not have been able to bench press a bus like Hulk or become an expert in thermonuclear astrophysics in a night like Tony. But what he had was an unshakeable work ethic, unflagging integrity, a clear understanding of right and wrong, and a willingness to sacrifice his all for others. Maybe the super part of Steve Rogers’ superhero came from a bottle. But the hero? He was already there.

That makes him practically biblical.

God doesn’t seem to have much use for superheroes. In the Bible, he chooses ordinary guys for extraordinary work.

When you read the Bible, you don’t see a lot of superheroes. That bummed me out when I was a little boy. I wasn’t allowed to read superhero comic books, but I still loved my coloring book paragons — Superman and Batman and Spider-Man and the rest.

I think I would’ve been more interested in the Good Book as a kid if it had more heroes like Sampson, who was always killing lions with his bare hands and slaughtering armies with nothing but a handy jawbone.

But Sampson was kind of a jerk at times, too. He acted, honestly, a bit like Tony Stark at his worst — puffed up and prideful. And his story doesn’t end that well.

God doesn’t seem to have much use for superheroes. In the Bible, he chooses ordinary guys for extraordinary work. Indeed, many are deeply flawed. But they all share one thing in common: a willingness to follow God’s call and take some pretty huge risks in doing so.

There’s Moses, the failed Egyptian prince. There’s David, an afterthought son from the house of Jesse. Peter, a fisherman. Paul, a turncoat Pharisee. None of these people were blessed with supernatural abilities. Not a single one turned green when they were angry.

God just needs us, I think, to be a little like a scrawny Steve Rogers: to have integrity.

In Christianity, we talk a lot about the gifts God gives us — our talents and abilities that we, hopefully, use to glorify him. I’ve often told my own kids to not squander their gifts and to leverage them the best that they can. Some Christians believe that God even gives us special gifts when we turn our lives over to him — gifts of tongues or prophecy or prayer or the like.

But God, being God, doesn’t necessarily need us to be particularly gifted to follow his call. He doesn’t need us to be superheroes. He just needs us, I think, to be a little like a scrawny Steve Rogers: to have integrity. To be willing to sacrifice. And to be mindful of the chance to follow a special call and do something awesome.

This article originally appeared on OnFaith . Paul Asay is an author, entertainment critic, and freelance writer. He writes about culture for PluggedIn and wrote the Batman book, God on the Streets of Gotham.