Amusingly, while it is considered gauche to talk about politics or religion around the dinner table or in polite company, many of us have found therapeutic outlets for self-expression about these very same things on our back bumpers. 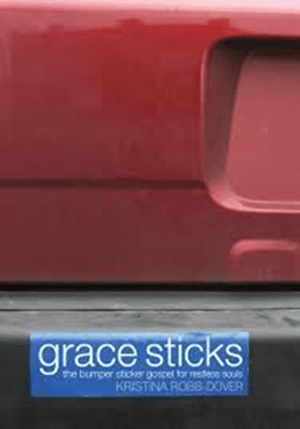 This is the first of my confessions: I’ve never put a bumper sticker on my car. The only time I came close was when a certain politician was running for office, and even then it was only by proxy that I joined the ranks of the many Americans who choose to wear their views on their cars in lieu of their sleeves. My husband put the sticker on his bumper, with the result that I, a church pastor at the time, chose to drive our other unclothed vehicle to work.

Still, while I have yet to summon up enough courage to be- come the vehicular poster girl for the next worthy cause or passionately held belief, I have harbored a curiosity about—and even a shy admiration for—those who make their rear bumpers moving billboards. You might even say that I have cultivated a hobby out of reading these slogans above other people’s tailpipes. The 1969 Volkswagen perched in the parking lot, “scattered, smothered and covered” in full-blown, Waffle House style, like some postmodern totem pole in homage to its artist. Or the soccer parent’s Honda Odyssey with the one token, silver fish emblem, encircling the word, “Jesus” (or, if not Jesus, then “Darwin”). Or the Chevrolet with the cryptic saying that you struggle to make sense of and are still decoding the next day.

Amusingly, while it is considered gauche to talk about politics or religion around the dinner table or in polite company, many of us have found therapeutic outlets for self-expression about these very same things on our back bumpers. Pithy aphorisms. Funny quotations. Senseless double entèndres. in-your-face declarations of what we believe. Our bumper stickers are an open, sometimes voyeuristic window onto our hearts and the things that inspire, of- fend, infuriate, move, embarrass, and perplex us.

In my line of work, I spend a whole lot of time in the car. These comings and goings are often marked by the mindless entertainment of bumper stickers, be they idling at a light or lounging in a parking lot. Bumper stickers often catch my attention and frequently elicit at least a laugh or a pair of raised eyebrows, if not an exclamation of disbelief.

There are also the times when bumper stickers signify more than mere amusement, insofar as they imply something about their owner: for example, that bumper sticker on the luxury SUV, recklessly weaving through traffic at seventy-miles-per-hour on the freeway, which reads, “My tapeworm is smarter than your honor student”; or the dilapidated pickup truck, overladen by second-hand furniture threatening to topple at any moment, which sports the rear-end declaration, “I’m just here to annoy you.”

I have encountered many a self-revelation by a stranger with the help of only a few sound bites on their car. Maybe you have, too. Like those two telling stickers a friend recently spied on somebody’s truck: the first read, “I thought I met my knight in shining armor, but he turned out to be a dork in tin foil”; the second, “So Many 2x4’s So Few Studs.”

A bumper sticker, however silly, stupid or offensive, can offer a glimpse into the aspirations of the driver. What are they seeking or not seeking? To what do they give pride of place? In what do they derive their sense of purpose? In this way, a short caption over a tailpipe can speak beyond itself. Your bumper stickers tell me something about who you are, where you come from and what you believe or long for; as nuggets of meaning, truth or life in a changing world, they can help narrate an ever-evolving story.

In a similar manner, then, the bumper stickers within these pages navigate my own, unique itinerary of grace. They best encapsulate how a gracious God has become real to me in all my wonderings and wanderings. They are signposts on my journey.

But these God sightings are yours also. They are yours because I have read them on the back of your Subaru station wagon or Ford escort, or because you, too, have been entertained by their silliness while fumbling for your keys in the parking lot or sitting at an interminably long red light. They are yours in that you, too, have found them funny, inspirational, stupid, or infuriating. They are yours if you really do “honk if you love Jesus” and “text if you want to meet Him.”

If bumper stickers provide a fun, familiar currency in which to swap stories and reflections at the intersection between life and God, they also uncover the “More” we have yet to find in our spiritual journeys as distinctively American artifacts, they can embody.

These days a growing number of these souls are leaving church and not looking back, or seeking something more than what they discovered there. They, to quote the words of the band U2, “still haven’t found what [they’re] looking for.”

A poll released in October 2012 by the Pew Forum on religion and Public Life found one in five Americans and one out of three adults under the age of thirty now describes himself as either “spiritual but not religious” or “neither spiritual nor religious.

”4 These “Nones” are generally between the ages of 18 and 64, and their number is steadily rising.5 if they are not all young in years, these restless souls are young in spirit: they eschew easy answers for the adventure of living the questions; they shun hypocrisy and long for an experience of what is real and true over neatly packaged doctrines; they are distrustful of organized religion and its traditional authority figures; they prefer the freedom of the open road to any religious collective, which, with appeals to money, power, and institutional preservation, would seek to bind their souls.

My own experience is that you do not have to be religiously unaffiliated to be a restless soul. Restless souls are in churches, too, if not as members then as regular attenders. In fact I would venture to guess there are many of us who, despite attending church worship services at least occasionally, find ourselves on the margins of the church, or reluctant to join the church for some of the same reasons cited by the religiously unaffiliated.

Whether churched or unchurched, religious or non-religious, we are restless souls because we seek “the More” we have yet to find in our churches.