One of the great moral and spiritual lessons I have learned, one that the poet Dante Alighieri teaches insistently in his Commedia is: never, ever place your faith in the things of this world. Only God is worthy of our ultimate love and faith. 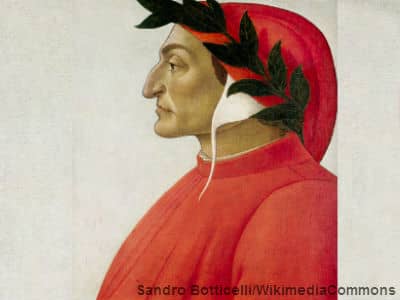 Said the glum Italian man to me in a little shop, “They are turning my city into Disneyland.”

He’s right: Florence, one of the great cities of world history, is now a museum for tourists – people like me who come here to savor its past glories. I have been here for several days, trying to work my way through crowds of Americans, Japanese, and Chinese who spill out of every church and into every street in the historic center of this city, where the Italian Renaissance began.

It’s easy to see why people come here: there are few cities in the world so rich and thick in history and culture, where events were once so consequential for Western civilization. A list of the artists associated with this city says it all: Leonardo da Vinci, Michelangelo, Giotto, Cimabue, Donatello, Fra Angelico, Brunelleschi, Petrarch, Boccaccio – and, for me, above all others, the poet Dante Alighieri (1265-1321), whose medieval masterpiece The Divine Comedy drew me to his hometown.

Reading the Commedia, as Dante’s 14,000-line poem is called in Italian, changed my life. It drew me out of a slough of despond, helped me to repent of some deep sins, and brought me closer to God. I’m writing a book about that experience, and wanted to make a pilgrimage to Florence to see where the great man lived and worked.

It has been an education. And one of the great moral and spiritual lessons I have learned, one that Dante teaches insistently in his Commedia is: never, ever place your faith in the things of this world. Only God is worthy of our ultimate love and faith.

You don’t have to be religious to understand how quickly the glories of this world pass. You just have to come to Florence with your eyes open. For around 300 years, few cities in the world burned brighter than Florence. It was extremely wealthy – modern banking was more or less invented here – and that wealth created a culture of vast sophistication and depth. And then one day, it was all gone.

Said an American sitting at my table at dinner one night, “Nothing has happened here in 500 years.” I thought that was a harsh and untrue thing to say, but it turns out the man was right. A light went out in Florence, or rather, what light that still shines in this jeweled lantern of a city are embers from the High Middle Ages and the Renaissance.

I’m not complaining. The work of a Florentine poet who lived seven centuries ago illuminated the way for me out of my own dark wood. The light that was once here shone so intensely that its afterglow still attracts an estimated seven million visitors each year. Still, you have to wonder what happened. Where are all the rich and powerful families who made Florence an economic and cultural powerhouse? Their names are on buildings and in archives, but they passed into history long ago. Time is not kind to human vanity.

In the Inferno, the pilgrim Dante (he is a character in his own poem) meets Brunetto Latini, a famous literary figure and Florentine civic leader praised by the naïve pilgrim for having taught him “how to be immortal.” Yes, says Brunetto, you must always write for the sake of fame – that’s the way to live forever. Brunetto, though, dwells in the fires of Hell for all time.

The poet’s lesson, using a naïve fictional version of himself, is that Brunetto’s teaching is a lie. The only way to live forever is through faith in God, and in doing all you can in this life to love and serve Him. Dante was a devout Christian, but even if one does not share his faith, the reader can still learn from the wise poet that to live without self-sacrificing love as your highest goal is to risk creating Hell on earth for yourself and everyone else.

On the other hand, no one can deny that the art created in Florence from roughly 1300 to 1600 was among the greatest ever made by human hands. In that sense, Florence has achieved immortality of a kind. As long as human genius is praised, Florence will receive her due. But one day, even these paintings and sculptures will sink beneath the waves of the ocean of eternity. You cannot conquer time.

As an American visitor to this great city, it is sobering to think that Florence’s golden age lasted longer than the United States has existed as a nation. We Americans believe that what we have will last forever, because it is in the natural order of things that we live in peace and prosperity, world without end, amen. Though Renaissance Florence was not exactly a placid metropolis, I imagine many Florentines of the era expected that the good times would never end.

Walking on the Ponte Vecchio, the 14th century bridge that still spans the River Arno, I saw an aging American man sitting on a bench at rest. He had fearsome tattoos covering his arms and hands. “Dirty deeds done dirt cheap” read one, quoting a scalding 1970s-era hard rock song. The inked images on the man’s forearms were relics of a time when he must have been on fire for life.

But now the pigments have faded, the canvas is dry and wrinkled, and the man has white hair, a drooping mustache, and a vast belly. As I stood to take a photo of the river, he stood stiffly, and shuffled off with difficulty. That is me in twenty years, I thought. No tattoos, certainly, and likely having lived a far tamer life than that man – but still, I will have that body, and that hair, and that gait. It’s in the natural order of things.

The lives of cities and men alike rise and converge, according to their season and their destiny. The only thing constant is God. Dante Alighieri, equaled only by William Shakespeare as the greatest writer of Western civilization, wrote in the Commedia that he nearly destroyed his life by loving the things that decay more than the God who stands forever. Maybe, just maybe, a few of the millions who tromp through this Renaissance Disneyland every year will be moved by its beauty to take up the best-known book of its most famous son and read as if their eternal life depended on it.

Because it just might. At dinner the other night, an American tourist asked me why I was here. I told him. We discussed Dante for a while, and I told him that Dante’s poem restored me to life, and to God, after a bad period. This is not art you see, I said; this is art that sees you.

“I’m having some rough times in my life right now,” the American said. “It sounds like I need to read that man’s stuff.”

I left the restaurant later quietly resolving to pray for him to find his way to Dante, and for Dante to show him the way to God. Florence may be a faded beauty, but moments like that don’t happen at Disneyland.

Rod Dreher is writing a book called How Dante Can Save Your Life, which will be published in the winter of 2015.