Characters and the Cross

Crucified as objects of public scorn, the three were hoisted high so all could easily see the cost of human disobedience. Only death could shield them from morbid public stare of piteous disgrace. 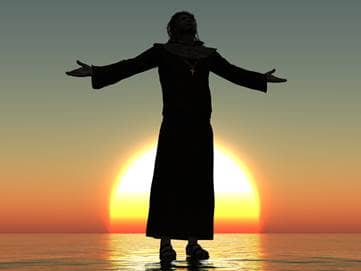 Via the way of suffering and grief, the Via Dolorosa, Christ made his way up Golgotha’s hill. He walked not alone. Among two criminals Christ strode, while evil filled the gutters.

Together, the condemned three made their way to the hill of death and frozen faces. The criminals were destined to be there, for ancient words speak of them as transgressors. “He poured out his soul to death and was numbered with the transgressor.”

On the renowned hill, spikes were bunched—sourced from where, who knows. Recycled and bent they may well have been. Bunched, they waited for their thudding blows to set them deep within the crosses.

Crucified as objects of public scorn, the three were hoisted high so all could easily see the cost of human disobedience. Only death could shield them from morbid public stare of piteous disgrace. Spiked to their crosses, they hung in torturous pain, waiting for death to drape its freeze upon their faces.

The atmosphere on this chilling-killing day was mournfully convulsive. That is, for some but certainly not for all.

It was a day of retribution for the religious elite. Their fortitude had paid off. They had won, or so they thought. “Good riddance” was the mood, a chance to finally shake their fists at this dangerous zealot threatening to destroy God’s temple.

For the disciples, bewilderment is the word most apropos. They had left everything to follow, to learn, to become disciples. Their shepherd now hung on the middle of crosses three. Bewilderment and brutality teamed up to wrench and test all they’d come to know.

For Christ’s family watching, what did they see when their eyes looked up to Golgotha’s hill?

They saw history repurposed. They saw much of love, grace, torture, and disgrace. Utter heartbreak and sorrow was etched upon their faces.

Hoisted high before bulging eyes and fists clenched, the message hung. Blood was his garment. Drenched red he was. From tissues deeply torn, blood flowed.

Blood of head joined blood of face, moving down the neck. Over the shoulders, blood trailed to his chest and back. Around the waist and down the legs, blood flowed.

Around the knees, from chinbone to ankles, the warm crimson fluid trickled on. Across the feet it advanced, past the spikes, before the toes, it reached. From there it dripped, the blood of God and man mixed, moistening the craggy soil of Golgotha’s hill.

The Alpha and Omega of divine verse hung, his shredded flesh dying but his words ever living, never dying. This drama was scripted before the world began.

The words of St. Peter do not lie: “Like that of a lamb without blemish or spot, he was destined before the foundation of the world but was made manifest at the end of the times for your sake.”

There is no precedent for words acting as these words did—to tell a tale, to draft a drama. In they came. From here and there, they came. At the assigned time and place, they converged, joining the lines for Christ’s message in the making.

As the story broke, characters in the grand drama also got their call. Emerging, they grasped the moment scurrying to and fro, filling in the story for posterity and eternity.

The priests grasped Judas and the silver coins he scattered on the temple floor. With the pickings, they eventually grasped a plot of land.

Simon the Cyrene grasped a cross, one not his own. Soldiers grasped clothes and cast lots. Two thieves: One grasped the kingdom of God; the other grasped defiance. One grasped redemption, the other retribution.

Christ grasped gasps and final words. Mary, peering from the hill, watched the flesh she bore give way to death. Which words he spoke as his last, no one knows for sure. St. John records, “It is finished.” St. Luke reports that Christ took his last breath after saying, “Father, into your hands I commit my spirit!”

As all prophetic Scriptures found their storied places, it was time for Christ to die. His death spoke with universal awe.

With death, the pumping of blood and its dripping swiftly stopped. The medium of life was now silent—but his message speaking still. Death silent spoke meaning into life, as evil filled the gutters.

William Jefferson is author of Messages from Estillyen: A Novel of Redemption and Human Worth, from which this piece is adapted. Jefferson holds an MTh in Theology and Media from the University of Edinburgh and an MA in Communications from the Wheaton Graduate School. He writes from a Civil-War era cottage in the Missouri Ozarks.