Can Prayer be Wasted?

I read and reread Abraham's story many times trying to see what I could learn. After one reading, a tiny, yet huge detail jumped off the page: when God called Abraham to move, Abraham didn't pray if he should move, he just went. 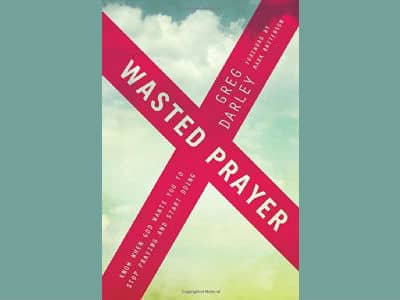 There are two types of Christians in the world (ok, there's a lot more than that, but humor me for the point of this article). There are those that do crazy things like Abraham, pack up everything they own and move to an unknown destination because God said so. And there are those that won't. And I think that the difference between the two could be that the latter don’t know when it’s time to stop praying and start doing.

Just recently, I had the opportunity to meet a local ministry leader in the Dominican Republic helping protect children from sexual violence. Ten years ago, she had a good-paying, full-time job that had her on a track to grow her affluence and life style—not a typical situation for most in her poverty stricken area. Life was fine for her until she met two local children, who were being abused, one with Down syndrome. She and her husband decided to bring the two girls into their home, offering the only available option for protection. She continued working to provide for her family and the two girls. As the months turned into years, the need to help more girls continued to press into her heart. Fast-forward eight years, she is now running an orphanage and restoration home for forty plus girls who were either sexually abused or at risk of abuse.

If you're like me, you are struck with a sense of wonder when you encounter someone with this type of faith. The question then becomes, how do I get to the place where I can have that kind of faith? It was this question that promoted the journey of writing Wasted Prayer. I read and reread Abraham's story many times trying to see what I could learn. After one reading, a tiny, yet huge detail jumped off the page: when God called Abraham to move, Abraham didn't pray if he should move, he just went.

As this thought invaded my mind I was left with a question: I wonder how many times I only prayed about doing something God called me to do, instead of actually doing it? Because it seems that if I was spending time praying about whether or not I should do something God had already called me to do, I was using prayer as a way to get out of being obedient—I was wasting prayer.

Wasted Prayer is an attempt to help us get to the place where we will respond like Abraham when God calls us to do something for him. Not everyone will receive the call to pack up everything you own and move without a clear destination. But all of us will be called to do something that scares us or something that we could easily justify only praying about. It could be something simple like inviting a neighbor over for dinner or emotionally difficult like calling an estranged family member you haven’t talked to in years. Though some will be difficult and others simple, when God calls you do something, he has a plan and a purpose and he is looking for your obedience. Maybe its time for you to stop praying and start doing what God’s called you to do.