When the Christmas story is told, we hear mostly about Mary, the mother of Jesus. Joseph, her husband, however, has often been relegated to little more than a footnote to the story. 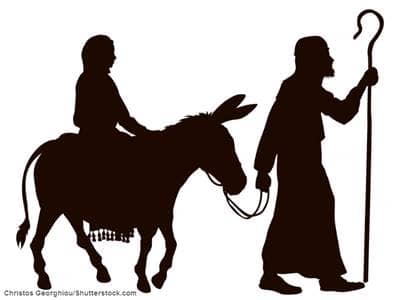 When the Christmas story is told, we hear mostly about Mary, the mother of Jesus.

Throughout church history, Mary has been venerated, as she should be. Joseph, her husband, however, has often been relegated to little more than a footnote to the story.

But Joseph was one of the most righteous men who ever lived. Now when most modern Christians think of a “righteous man,” they think of things like being a good husband, a patient father, a trusted and successful employee who lives a good clean life (doesn’t “smoke, drink, chew or run with those who do,” as the old saying goes), and so on.

I have no doubts that Joseph was upright in the area of personal piety. But the Bible gives us a much deeper peek at what a righteous person is and how he or she reacts to certain situations. Consider Matthew 1:19-20: "Because Joseph her husband was a righteous man and did not want to expose her to public disgrace, he had in mind to put her away quietly. But after he had considered this, an angel of the Lord appeared to him in a dream and said, “Joseph son of David, do not be afraid to take Mary home as your wife, because what is conceived in her is from the Holy Spirit.” Matthew says that because Joseph was a righteous man, he chose not to publicly disgrace and shame Mary, even though (according to his knowledge at the time) she deserved it.

Now consider this question: How many Christians today would react the same way that Joseph did if they were standing in his shoes?

Joseph wasn’t thirsty for blood. He didn’t justify the act of bringing public disgrace upon Mary. Instead, he took the high road and put her away privately, lest she face public humiliation and shame.

I’m sure Joseph’s blood boiled when he heard that the woman he committed to marry was pregnant, and not by him. But because he was a righteous man, he showed mercy. He treated Mary as if he were in her own shoes and was guilty of what he had assumed she did.

Perhaps Joseph thought to himself what his step-son would say to a woman worthy of death almost thirty years later, “He who has never sinned, let him cast the first stone” (John 8:7). Perhaps after the initial rage subsided, Joseph took a good, hard look at his own life and recalled the many times where he himself missed the mark. Perhaps he reflected on his lineage and recalled the many grievous sins that his own kinfolk committed in the past (see Matthew 1:1-16; Joseph’s lineage is populated by those who committed murder, adultery, prostitution, etc. This was the very lineage that God the Father chose for His perfect Son, Jesus).

Consider for a moment the people whom Jesus spent most of His time with, whom He ate with (which in that day was a sign of union, friendship, and acceptance), whom He showed mercy to, whom He extended grace to, and whom He removed shame from.

These were the very people who the religious leaders of His day regarded as the most sinful. Their sinful deeds being at the top of their lists. This is why Jesus earned the title “the friend of sinners.”

Some specific examples:
• He broke bread in the home of a tax-collector who was siding with Rome in oppressing his own people (Zacchaeus).
• He completely forgave a woman caught in the act of adultery.
• He allowed a prostitute to anoint His feet with her hair in the presence of judgmental Pharisees.
• He communed with and later broke bread with a multiple-divorcee who was living in sin.

Granted, all of these people later repented of their sins and followed the Lord, but Jesus loved them, received them, and their sinful lives didn’t put Him off. The harshest word He said to any of them was “go and sin no more.”

Now . . . shift gears and look at the sins that literally made Jesus angry and provoked Him to issue hot-boiling, scathing rebukes. It was the sins of self-righteousness. And it was aimed at those who sought to shame and humiliate others because of their wrong-doing.

The pure and spotless Lord Jesus Christ turned the pyramid upside down. Jonathan Edwards rightly said, “The deceitfulness of the heart of man appears in no one thing so much as this of spiritual pride and self-righteousness.”

Note that Matthew says that while Joseph was considering doing this righteous deed (putting Mary away privately to spare her public disgrace), the angel appeared to him.

How many angels have passed us by because we chose to take the low road of shaming other people because of their sins or shortcomings, without any regard to our own sins and shortcomings?

(At this moment, someone reading that last line is thinking of Matthew 18:15ff. where Jesus says that a local assembly can excommunicate a person because of sin. But please consider two things about that passage. First, Jesus said to go to the person privately so as not to shame them, but to bring reconciliation in a private way. Second, the person in view had stubbornly refused to stop sinning after being approached multiple times in private. Only then was it to be “told to the assembly.”)

Joseph’s decision to take the high road and spare Mary public shame is echoed throughout the entire Scriptural narrative. Even beginning at the beginning in Genesis.

Remember Noah’s night of binge drinking? His son, Ham, uncovered his father’s nakedness. Shem and Japheth, on the other hand, walked into the tent backwards with a blanket, refusing to see the shame, but covering their father’s disgraceful state. Ham’s lineage was cursed as a result.

It’s hard on our flesh to walk into a tent backwards, holding a blanket. But that’s God’s way. It’s the way of righteousness.

Jesus Christ, your Lord, is in the business of removing people’s shame.

Our Lord’s first miracle at Cana demonstrated His heart to remove public shame from a bridegroom who had miscalculated how much wine to provide for his wedding. Jesus remedied the situation by providing the best wine at the very end, covering the social disgrace that would have been leveled at the bridegroom’s feet because of his error.

If you’ve done something in your past that you have repented of (ceased from practicing), but it still haunts you with regret, take heart. Peter, the great apostle, whose many sins grew in their severity until the most grievous of all—the betrayal of our Lord—was fully forgiven and restored by Jesus. But more than that, Peter was used mightily by Jesus, even earning the title “the greatest apostle.”

Echoing the promise of the New Covenant in Hebrews 8:12, A.W. Tozer rightly says, “When God forgives, He forgets.” Let's take our cue from God Himself.

This Christmas season, let’s remember Joseph and walk in his footsteps.

The Life that dwells in every Christian . . . the Life of Joseph’s step-son, Jesus the Christ . . . will always lead us to treat others the same way we would want to be treated if we were standing in their shoes.

No one wishes to be shamed and disgraced if they’ve repented of wrong-doing. And self-righteousness is not in His nature.

Frank Viola has helped thousands of people around the world to deepen their relationship with Jesus Christ and enter into a more vibrant and authentic experience of church. Viola has written many books on these themes, including God's Favorite Place on Earth and From Eternity to Here. His blog, Beyond Evangelical, is rated as one of the most popular in Christian circles today: frankviola.org