Mitch Albom, author of "Tuesdays with Morrie," describes what he learned about faith in his new book, "Have a Little Faith."

Have a Little Faith

Have a Little Faith

My new book, Have a Little Faith, is the story of an eight-year journey between two worlds—two men, two faiths, two communities. It begins with a dying request from my childhood rabbi, Albert Lewis. "Will you do my eulogy?" It stopped me in my tracks. I had never been asked this before. Not by anyone—let alone a religious leader. Who does a eulogy for the man who does eulogies?

His request plunges me back into the world of belief, a world I had left behind. I am drawn back to my childhood congregation and my old hometown—a suburban temple in southern New Jersey. At the same time, I am led to a poor, inner-city church in downtown Detroit—where I live now—with a hole in its roof where the rain and snow fall in. It is run by a former convict turned pastor, Henry Covington, who does his penance by taking care of the homeless.

This is a story about believing in something and the two very different men who taught me how. It took a long time to write. It took me to churches and synagogues, to the suburbs and the city, to the "us" versus "them" that divides faith around the world.

What I learned from my time with Henry, what I learned from all those visits with my beloved clergyman, who I called "the Reb," is the backbone of "Have A Little Faith."
I'd like to share some of those lessons here with you.

Mitch Albom is an author, playwright, journalist, and screenwriter who has written six books, including the international best-seller "Tuesdays with Morrie," the best-selling memoir of all time. His first two novels, "The Five People You Meet in Heaven" and "For One More Day," were instant number-one New York Times best-sellers. All three books were made into acclaimed TV films. Mitch oversees three charities in Detroit. He lives with his wife, Janine, in Michigan.

"Faith is about doing. You are how you act, not just how you believe"

"Faith is about doing. You are how you act, not just how you believe"

Now, the Reb didn't merely practice his rituals; he carved his daily life from them. If he wasn't praying, he was studying—a major part of his faith—or doing charity or visiting the sick. It made for a more predictable life, perhaps even a dull one by American standards. After all, we are conditioned to reject the "same old routine." We're supposed to keep things new, fresh. The Reb wasn't into fresh. He never took up fads. He didn't do Pilates, he didn't golf (someone gave him a single club once; it sat in his garage for years).

But there was something calming about his pious life, the way he puttered from one custom to the next; the way certain hours held certain acts.

He said: "My grandparents did these things. My parents, too. If I take the pattern and throw it out, what does that say about their lives? Or mine? From generation to generation, these rituals are how we remain…connected."

"We are a sacred community"

"We are a sacred community"

"When I was growing up in the Bronx," the Reb once told me, "everyone knew everyone. Our apartment building was like family. We watched out for one another.

"I remember once, as a boy, I was so hungry, and there was a fruit and vegetable truck parked by our building. I tried to bump against it, so an apple would fall into my hands. That way it wouldn't feel like stealing.

"Suddenly, I heard a voice from above yelling at me in Yiddish, ‘Albert, it is forbidden!' I jumped. I thought it was God."

Who was it? I asked.

"A lady who lived upstairs."

I laughed. Not quite God.

"No. But we were part of each other's lives. If someone was about to slip, someone else could catch him.

"That's the critical idea behind a congregation. We call it a Kehillah Kedoshah—a sacred community. We're losing that now. The suburbs have changed things. Everyone has a car. Everyone has a million things scheduled. How can you look out for your neighbor? You're lucky to get a family to sit down for a meal together."

"When you come to the end, that's where God begins"

"When you come to the end, that's where God begins"

I once asked the Reb how he knew God existed. When he asked me to first make the case against Him, I argued that we live in a world where your genes can be mapped, where your cells can be copied, where your face can be altered. We have science to tell us of the earth's creation; rocket probes explore the universe. The sun is no longer a mystery. Why, in such a place, where the once-great mysteries have been solved, does anyone still believe in God or Jesus or Allah or a Supreme Being of any kind? Haven't we outgrown it?

He leaned in. "Now. My turn. Look, if you say that science will eventually prove there is no God, on that I must differ. No matter how small they take it back, to a tadpole, to an atom, there is always something they can't explain, something that created it all at the end of the search.

"And no matter how far they try to go the other way—to extend life, play around with the genes, clone this, clone that, live to one hundred and fifty—at some point, life is over. And then what happens? When life comes to an end?"

He leaned back. He smiled.

"When you come to the end, that's where God begins."

When I first met Henry Covington, he was wearing a white t-shirt and perspiring from his forehead. He weighed over 400 pounds and when he shook my hand, I said to myself, "If this is a Man of God, I'm the man in the moon." But he had turned his life over to God on a night he thought he would be murdered. When he survived to the next morning, he began walking in a new direction.

Henry shared a lot of his past with me, and while there was a part of me that admired his honesty, there was another that felt his laundry list of bad behavior should somehow disqualify him from the pulpit.

"I am an awful person," he had confessed to me. "The things I have done in my life, they can never be erased. That may not be who I am now, but it's who I was."

"I deserve hell," he whispered. "The things I've done, God would be justified. God is not mocked. What you sow, you reap."

But, Henry, all the good you do here—

"No." He shook his head. "You can't work your way into heaven. Anytime you try and justify yourself with works, you disqualify yourself with works. What I do here, every day, for the rest of my life, is only my way of saying, ‘Lord, regardless of what eternity holds for me, let me give something back to you. I know it don't even no scorecard. But let me make something of my life before I go?.?..And then, Lord, I'm at your mercy.'?"

I realized something that night after we talked: that I am neither better nor smarter, only luckier. And I should be ashamed of thinking I knew everything, because you can know the whole world and still feel lost in it. So many people are in pain—no matter how smart or accomplished—they cry, they yearn, they hurt. But instead of looking down on things, they look up, which is where I should have been looking, too. Because when the world quiets to the sound of your own breathing, we all want the same things: comfort, love, and a peaceful heart.

Maybe the first half of his life he did worse than most, and maybe the second half he did better. But that night was the last time I questioned how much Henry Covington's past should shadow his future. Scripture says, "Judge not." But God had the right to, and Henry lived with that every day. It was enough.

"Be satisfied. Be grateful"

"Be satisfied. Be grateful"

"Having more does not keep you from wanting more," the Reb once explained. "And if you always want more—to be richer, more beautiful, more well known—you are missing the bigger picture, and I can tell you from experience, happiness will never come."

So, have you solved the secret of happiness?

"I believe so," he answered me.

"For what you have. For the love you receive. And for what God has given you."

He looked me in the eye. Then he sighed deeply. 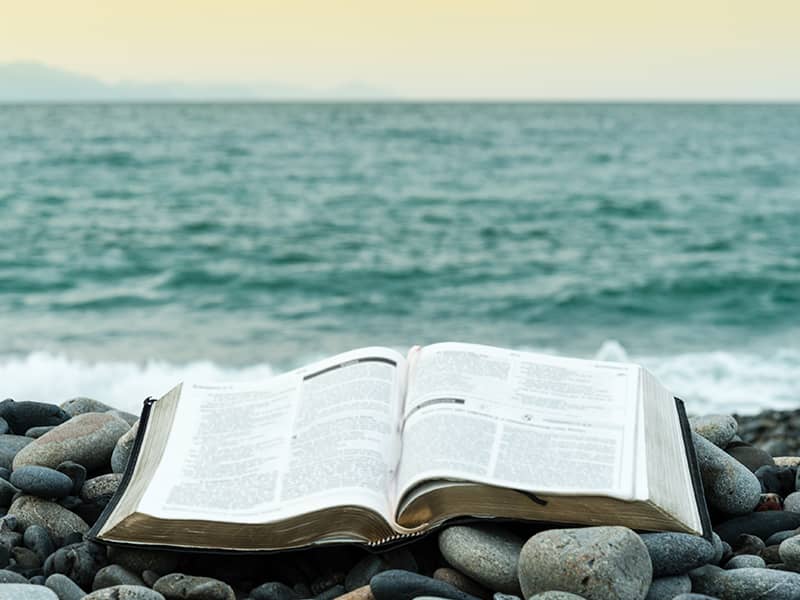 Was God in This Disaster?
Turning to both Judaism and Buddhism for solace, the author meditates on God's role in the tsunami tragedy. Read next feature >