Tony Soprano Is Going to Hell

For six seasons, 'Sopranos' fans have been asking what will happen to Tony. The answer: He is going to hell. 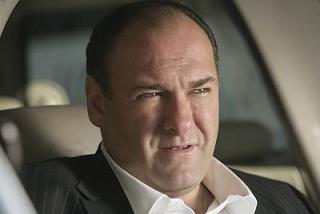 The opening image of "The Second Coming," the third-to-last episode of "The Sopranos," is a steaming pile of trash. The camera lingers on the image for a moment, then cuts to a wide angle of the refuse at the edge of a New Jersey marshland. The waste is seeping into the water, contaminating a whole region, a whole people.

"Sopranos" devotees know that this isn't just any trash—it's Tony Soprano's trash, a pile of asbestos produced by a workers union the Sopranos are extorting. Tony's mob-chief rival, Phil Leotardo, will no longer allow Tony's crew to dump in one of Phil's waste sites without paying a steep price. So Tony passes on the cost of doing business to thousands of Garden State residents.

The trash is a fitting image for Tony's decline as northern New Jersey mob boss and patriarch of the extended Sopranos family. "Waste management" has long been Tony's cover for his crime syndicate, but more importantly, trash has been a way for "Sopranos"-creator David Chase to make literal the ways in which the Mafia, as imagined by popular culture, is in the business of disposal. Mobsters don't just execute victims; they make them disappear—dark plastic bags; cement shoes; Joe Pesci, Robert DeNiro, and Ray Liotta digging a midnight grave in "Goodfellas." Being a good mobster means being a good custodian.

But we're in the End Times for Tony Soprano, which could mean he's headed for an apocalypse, a complete unveiling of his crimes as the FBI finally gets their guy. That's not likely to happen, but Tony's past is still present. He hasn't been a good enough manager of waste. Earlier this season the FBI discovered the resting place of Tony's first murder victim, a man Tony killed more than two decades earlier. The murder of Adrianna, fiancé of Tony's nephew and surrogate son Christopher Moltisanti, continued to haunt Tony and precipitated his decision to murder Christopher. These and other debris from Tony's past keep filtering into his life like refuse into the New Jersey marsh.

The image of burning asbestos, then, is the answer to what has always been the most pressing question for fans of "The Sopranos": What will happen to Tony?

Just outside Jerusalem in the Valley of Hinnom lies Gehenna, an ancient site which was used for child sacrifices, the cremation of criminal corpses, and the disposal of refuse. Several times in the Gospels when Jesus speaks of a place of damnation, he refers to Gehenna, which Jesus' hearers knew was forever dark, forever burning, and right around the corner.

Hell is a burning trash heap. And in some sense, it's a place here on earth.

For Tony Soprano, hell is a place of his own making, a place he has willfully chosen in spite of numerous opportunities for redemption. Tony's potential for moral transformation, to choose good instead of evil, has always been part of the drama of "The Sopranos." While many Mafia stories involve operatic descents into damnation, a la Michael Corleone in "The Godfather," Tony's evil is that of fits and starts. He cheats on his wife, Carmela, then dotes on her and pledges fidelity. He is a deadbeat dad who nonetheless responds from time to time to his kids' needs for protection and provision. He exudes concern for his associates and their families, even as he uses them for his own gain.
If Tony is hell-bound, it's not because he's unaware of his direction. Tony is often pointed away from the path of destruction. Dr. Jennifer Melfi, his therapist, counsels him toward self-knowledge, but Tony chooses self-aggrandizement. His wife Carmela leaves him, and he lures her into coming back--without changing his wayward ways. In a near-death experience after being shot by his Uncle Junior, Tony has a dream that affords him clues as to how he could liberate himself from his evil life, but when he awakens, he ignores those clues.

What's true for Tony is true for many, perhaps all, of the show's other characters. Italian Catholicism frames "The Sopranos," but Calvinism undergirds its dark view of human nature. Weak of will and seemingly unable to transcend depravity, the characters invariably make the wrong moral choices, whether they consist of Carmela's knowing complicity in her husband's crimes (so she can enjoy his wealth) or the flirtations of her priest-friend Father Phil with his female parishioners (at least those who can bake a good ziti).

All this raises the question: If Tony is just a monster, and the entire "Sopranos" worldview is dyspeptic, why do we watch? Would we tune in for 80+ episodes of, say, "Se7en"? What does the popularity of a violent, misogynistic suburban gangster myth say about us?

No doubt this question is much on the mind of "The Sopranos" producers. Many a scene has critiqued the show's viewership on grounds of voyeurism and lust for sex and violence. Like Alfred Hitchcock's "Rear Window," the show offers characters who stand in for its viewers, such as the crowd outside the Bada Bing who gawked at the gang hit/car wreck in last Sunday's episode.

But more simply, we watch Tony because he is an Everyman. Whoring and murdering aside, we relate to him. His solid, hulking girth is imposing, but it is also pathetic. He floats on his pool in a green blowup mattress. He wakes up groggily each day, slumps down the stairs in his plain white bathrobe—stomach protruding beneath his tank top—and hopes Carmela has fresh coffee brewed. He rolls his eyes at his son's videogames, worries over his daughter's dates, and mans the barbecue grill for Sunday afternoon parties.

Most ingeniously, he's a commuter. In the show's famous title sequence, Tony drives from New York City to his oversized home in the New Jersey suburbs. A show about a vicious crime lord begins by showing him doing the same thing that millions of Americans do day in, day out.

Tony Soprano is a schlub. As are other "Sopranos" principals. They are awful, but they are also just awkward. Sometimes the show plays this for laughs—in every other line from the mouth of mob enforcer Paulie Walnuts, for example—but more often it's played straight. "The Sopranos" is in this sense a realistic drama, with a capacity for depicting human beings in all their complexity: duplicitous, desirous of doing good but too weak to achieve it, and not a little dorky.

We watch the show, and the show watches us. It questions our affection for these characters, and it asks us to consider how we're like these people.

The show is nearly done asking, and I have to wonder how many "Sorpanos" viewers have heard these questions. David Chase seems to wonder, too—his show has openly mourned people's inability to make a series of good, wise choices that would create a good, wise life. For all the occasional conviviality among the Sopranos family and Tony's associates, for the glimpses of love and joy, the show is nearly absent of grace. It does not extend grace toward its characters, and neither does it extend grace toward its viewers, whose hope for Tony's goodness is futile, and whose affection for Tony's sordid story is part of what allows Tony to exist.

Grace won't be served on Sunday, but I suspect justice will be. Whatever comes of Tony's war with Phil Leotardo, Tony's family, and Tony's life, his end has been determined. He has neither shown nor sought mercy, and he'll be left with what he's been cultivating all along: a pile of stinking, smoldering trash. If Chase has his way with us, maybe we'll be turned off by the smell, and see if we can rid ourselves of the stench.