Leon Rippy, who plays Earl on 'Saving Grace,' talks about playing an angel on TV and being part of TNT's new hit show. 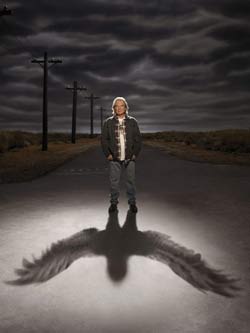 On the TNT series "Saving Grace," the veteran actress Holly Hunter plays Grace Hanadarko, an intense and cynical Oklahoma City police detective who drinks too much and sleeps around. Then she encounters Earl, an angel who's been sent to halt Grace's downward spiral. Though she's not interested in the redemption Earl promises, he doesn't give up on her. Leon Rippy is the actor who dons the angel wings to play Earl, trying week after week to save Grace from herself. Rippy recently spoke to Beliefnet about the role--and whether he believes in angels himself.

How does it feel to play an angel on TV?

I'm totally honored. I think it's by far the most important work that I've ever done. Throughout my career I've been a little part of many stories, but never have I had a role that I truly believe in my heart and soul has the ability to affect people's lives.

I think it offers hope to many that may consider themselves past it. And I think statistically in this country there are many more bars than there are churches, so you can drive by any one of those and there are half a dozen "Grace"s inside. And I just think a character like Earl is much easier for them to relate to than the typical imagery that comes to mind when thinking of angels.

Do you believe in angels yourself?

Yes, I do. I certainly do, and I stepped out here in faith so many years ago. Before I came here, someone very close to me said, "You let go and let God." And I did, and it's not been all easy, and the faith has been put to the test a time or three, but somehow we've persisted and we're still here, and yes, I do believe in angels and faith. And not in a church sense of the word. I think there's so much hypocrisy in the church these days, that's probably what turned me against it early in life. But my faith is very strong, and so I can't believe I'm still here and still making a living doing something I love to do, and it's meaningful. I'm the most blessed guy in this town, there's no doubt.

That's an amazing thing to be able to say.

I'm sure I will always be able to. I can't imagine enduring this kind of lifestyle or committing to this kind of career or trying to accomplish this without God in my corner. That would be impossible for me.

Do you believe that people--and specifically, you--have a guardian angel?

I've never felt that there's any one specific guardian angel over our lives. I just believe they're here, and there's so much that we'll never understand and I don't want to understand until it's time to understand. I just acknowledge it and acknowledge the presence, so I can't say that here's someone that's been in communication with my old granny, and now they've been told to come keep an eye on me.

But from the time that I was young and experienced my first episodes with grief, I've always felt, when I was doing something that I knew was naughty at a young age, that somebody could see me. So it kept me from doing a lot of bad things.

Do you think a lot of people find their Earl in life? Do you think it's a character that most people, at some point in their life, encounter?

I would hope that they are able to find something that they believe in, and that something would be along the lines of Earl, [but] I can't speak for the masses.

I know that the words I'm given are so simplistic and so full of meaning, and I still can't believe they picked me to do it. I'm "machine stupid," but my wife goes on the Internet and reads some of the feedback that the network is getting, and it's really amazing. And obviously, you'll get a born-again now or then that has been totally offended by the language or sexual abrasiveness of the show. But for every one of those, there's 1,000 more that come to the plate and put them in their place, so to speak.

Why does the show feature so much drinking and sex? Why is it important that it's there?

It's important to show the degeneration of Grace's character, her self-destructiveness or what have you, and I think all those things go kind of hand-in-hand. As I mentioned earlier, driving by a bar and there are a bunch of "Grace"s inside--there are a lot of people that try to drown their troubles without putting their faith in a higher power, and those are vices of self-destructiveness that are part of everyday life in the world. I don't know that having a character that doesn't drink and doesn't smoke, doesn't have sex randomly--what's to save? So it's a crucial part of the story. This show is not comfortable to watch, obviously, but definitely shows that she's in need of some salvation.

Do you think she wants that salvation? Does she want to be redeemed?

I believe in her heart she does. Obviously the best part is her heart, and it's big, it's worth Earl's trouble. I've described her as being his biggest headache but his best friend as well. And I think you can see into a person's heart.

I think there is true evil in the world, but I certainly don't see any of that in her. I think the people that she arrests, maybe so. And, you know, God's forgiveness is huge, huge. I just recalled a read-through, a table read that we did of the final episode, and it moved me to tears that I couldn't control. It was a little embarrassing and I didn't know why this was happening. I discussed it with my wife on the way home, and it was one of those moments where I think I was torn between myself and the character that I'm playing, and saying, "Well, you know, I mean, I'm a man of forgiveness, but God's forgiveness is much greater than my own." And, you know, if he can find forgiveness for this lowly individual then, you know, that's more than I could do.

How did you prepare for this role?

When I got the script, I read it and it moved me. I was excited by it. My wife and I prepare every role together, and she works with me for a few days prior to going in. Maybe two or three times in my career I've gone into an audition feeling that I had it perfect, and then something happens and it's terrible. So this audition was one of those, and I kept forgetting what I was saying, and I even stopped in the middle of it and said, "I'm totally sorry. This never happens to me. I don't know why it's happening today." And Nancy [Miller, the show's creator] or one of the other producers said, "Oh, don't worry about it. It's just the dialog." And I said, "Well, that's easy for you to say, you have a job. I’m over here looking for one."

And somehow I made it through and had four additional auditions for this, which were all pretty good, and I got the role. Nancy called me that evening after I got it and said, "I wrote this a year and a half ago, and I, obviously, as a writer, have a vision of the person that's to be playing this, or the kind of person that I want. And when you stepped in the room, ou were the embodiment of that vision." And I'm thankful. Otherwise that first audition would have gotten me thrown out.

That sounds like that something every actor dreams of hearing.

It is. My wife and I are very spiritual people and we've prayed for a role like this my whole career, and how wonderful it is to have a role that we believe affects people in a positive way.

How do you maintain your faith in an industry not known for its spirituality?

I hide in the backyard. I made a rule a long time ago I come out when I'm being paid, I'm hungry, or need medical assistance. The rest of the time I don't have much to do with it. I just kind of say, "Well, that's all happening outside my fence." I go and I do my work and come home and we pray a lot, and have for a long, long time, and will never stop. And I'm blessed.

How would you describe the role of prayer in your life?

It's constant, and I've seen the results of it time and time again. It's a day-by-day thing, and we rely on it totally. It's the best way I know of combating problems when they seem insurmountable. And my wife's got an excellent parking prayer, and a parking space will open up right in front of where we're going pretty much every time. She went to lunch with our accountants a couple of months back, and and he said, "But we'll never get a parking place." And it's packed, and Carol said, " Yeah, just come on, there'll be one." And right in front of the door, you know, next to the handicapped space, there was one that opened up as soon as she got there. And she said, "I can't believe that." And Carol said, "Oh, it happens all the time." And she's made a big believer out of her. Or maybe she has a guardian angel of parking spaces.

To switch gears a little bit, I wanted to talk a little bit more about "Saving Grace" and its success. Are you surprised by it?

I'm surprised in one sense, just in the general sense of a spiritual-based show, without being "Touched by an Angel" or "Highway to Heaven."

My cousin's a minister in North Carolina, and he has many ministers under his jurisdiction there. And he told them all, "Oh, you have to watch my cousin, he's playing an angel on TV." And I went, "Oh, Gil, maybe you shouldn't have done that. I mean, you might get some of these people up in arms. This is not an easy show."

And I didn't hear from him for about three weeks after it started airing, and I wondered if he was getting a lot of flak from telling all these other ministers to tell their congregations to watch this thing. And then I get this wonderful e-mail from him saying, "You would not believe, Leon, how many of our Bible study groups throughout this whole jurisdiction have started discussing 'Saving Grace' every week."

It's just healthy debate, and if one person relishes it and another one hates it, hey, you've got reason to talk right there.

Where do you see the character of Earl going in the show?

I certainly hope he gets closer to accomplishing his task here of bringing Grace to a more righteous way of life, and I'm so excited every time we see a new script. I have no idea where it's going until I see those next scripts, and I'm glad I can't be killed off.