Rediscovering a Lost Language of Abenaki through Hollywood

This is not the pilgrim story you may recall from grade school. The classic depiction of the Native Americans on film is usually cookie cutter, dismissive, and unauthentic. 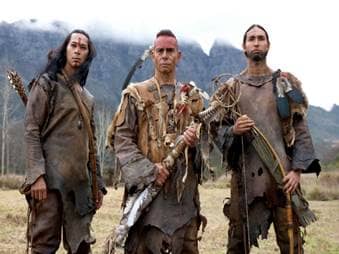 This is not the pilgrim story you may recall from grade school. The classic depiction of the Native Americans on film is usually cookie cutter, dismissive, and unauthentic. Since many of movie-goers don’t want to read subtitles the language of the Indians is mixed with English in most films. National Geographic’s television movie "Saints & Strangers" is changing this.

The two-night movie event on Nov. 22 and 23, is based on the pilgrims journey for religious, financial freedom, and their interaction with the Native Americans when they came to the New World.

“We wanted to bring integrity and accuracy to the tribe. What I really love about this show is that the language is legit. People are going to watch it and understand it. It’s not like a bunch of white actors back in the 60s and 70s in a John Wayne movie making stuff up,” Tatanka Means said,  who portrays Hobbamock., a warrior under Massasoit. Means also speaks Lakota and Navajo.

Hollywood likes to over dramatize, so whitewashing history is an element of concern when it comes to making historical films. “To me as an Indian actor, I always want to read the material first, because I come across horrible, tasteless scripts about the Native American people that people know nothing about. They know what they see from old westerns,” Trujillo said between scenes.

Massasoit decides to form alliances with the settlers. Kalani Queypo is Squanto—meaning “divine rage.” Squanto was the slave of the English explorers, and crossed the Atlantic four times and would act as the translator between the leaders of the Pokanoket tribe, and the settlers. Squanto  faces the question: Does he trust the settlers or other tribes?

“My character not only needs to be rooted and grounded, but having the wisdom to see and foresee the ramifications of his choices,” Queypo said. "So, he has to be very clear, and trust completely in his decision [ In his world ].”

When it came to the Native Americans storylines, the language of Abenaki needed to be explored, and resurfaced since there are “fewer than 50 fluent speakers of the Native American Abenaki language,” according to Dartmouth University in 2004.

Two years later only five people spoke the language and it’s considered dormant. Pronounced AH-buh-nah-kee, the Abenaki tribe was part of the Wabanaki Confederacy a group of five Algonquian tribes living on the East Coast. Abenakis were natives of Vermont, Main, and New Hampshire. Many people of the tribe journeyed to Canada and became scattered through New England.

The language was paramount for the script, and to introduce viewers to Abenaki.

For the actors, learning a new language on the fly was challenging. What you hear is masterful, in such a short time.

Means, Trujillo, and Queypo all needed to learn Abenaki in a matter of a few weeks. Listening to them and watching their scenes is poetic mastery. They were prepared a curriculum, and within 24 hours the studies started. They had Mp3s and technology to their advantage to learn phonetics, syntax and learning huge amount of dialog on the ride to set. More importantly, getting to the heart of  what happened centuries ago was transformative for them, and a must to honor their people.

“The concern for me was to really embody this particular culture. This one [film] was actually written a little bit more in terms of the real story,” said Queypo, who worked on the “New World” with Trujillo and admited the film was more abstract than "Saints & Strangers."

“The confrontations were clear and let’s not sanitize it and let’s get down to the nitty-gritty about what possibly could’ve happened by deducting from history.”

One thing is certain. National Geographic went through the painstaking process of consulting with historians, preparing actors, producers, and linguists to provide a historical drama that was transparent and authentic. Multiple actors mentioned behind-the-scenes, they were proud to be a part of the project that could make many rethink what happened when the settlers first crossed the shores.