Office star Rainn Wilson is a man of deep spiritual faith and intrigue. Check out our interview with him to learn more about his new special with Oprah! 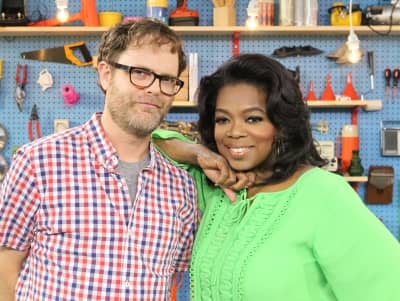 Rainn Wilson is full of surprises. The actor has been imbedded in our minds as the thoroughly strange and hilarious Dwight Schrute from the Office, but he has a whole lot more to offer. This Sunday he will be putting some of it on display with Oprah in the form of Oprah and Rainn Wilson Present SoulPancake. The special is based on a website that Rainn started which became a series of shorts on Oprah’s Emmy winning Super Soul Sunday. I was fortunate to speak with Rainn about his interesting spiritual journey and this new program.

How did you get involved with Oprah?

Well, I originally did her podcast called Oprah’s Soul Series. It was a podcast that she was doing while she was doing her show. It was about various spiritual speakers and their beliefs. She heard that I was starting up this website that had to do with spirituality called SoulPancake and asked if I’d come be on the show. So, I flew out to Chicago and I did the podcast. It was great! We talked for about an hour about all kinds of things. My growing up as a Baha’i, my spiritual journey, and about SoulPancake; what it was and what the mission was. We got along quite famously and she was just starting her network so I came in and introduced SoulPancake to the OWN network. That was about three years ago.

She’s incredible, I mean, that’s the understatement of the century. She’s an entrepreneur and a billionaire but her truest and deepest passion is that she’s committed to bringing different ways of thinking about spirituality to the everyday American. She’s done that more than anyone else. She’s really been incredible in that regard. There are all of these speakers like Deepak Chopra or Eckhart Tolle that no one would have heard of if it hadn’t been for Oprah.

Do you fashion yourself after those speakers in any way?

Well I am not that. I don’t want to be that. I don’t seek to be any kind of spiritual leader but as a celebrity from television I had an opportunity and I also felt a responsibility to do what I could to help make the world a better place. Besides charity work that I do with my wife, SoulPancake was a great way to do that. It’s about people connecting, it’s about what it is to have a human experience, and it’s about spirituality, creativity, philosophy, and asking life’s big questions. So, if I can help facilitate a discussion that gets people talking about big ideas, that gets people sharing, that brings people together, then I’m fine with that role.

What led you to selecting the subject of “love” for this special?

” Why do we search? Why do we ask questions? But, we felt like love was something that everything is built on, and that it was something we could find a lot of stories for. It was just a topic that we were really excited to explore.

How does your Baha’i faith influence your view of love?

In the Baha’i faith, as in all religions, love is the center of everything. Everything is based on love. Abdu’l Baha, the son of the founder of the Baha’i faith, says “love is the secret and the most great law.” I don’t even know what that means but it sounds pretty good to me (laughs). But, love is a force, and a principle in the world, it’s not just a nice feeling that you get around Valentine’s Day towards your girlfriend or a family member. It’s much deeper and broader than that. I do believe like the hippies of old that love can heal the world.