TLC takes a look at five Muslim families in their new show All-American Muslim, and Beliefnet talks with one of those families about their life, what it's like to be on television, and their brand new baby. 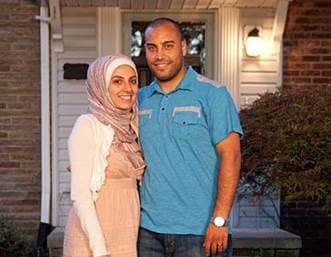 Have you ever wanted to step into the shoes of someone else? How about wearing their hijab instead? All-American Muslim is a new show from TLC that asks you to do just that.

All-American Muslim (Sundays at 10/9c), is the latest in their exceptional line of reality television that sheds the sensationalist drama of other productions in favor of, well, reality. TLC’s productions trend toward communicating actual events, aiming to reveal new communities in a way that is both sympathetic and honest. It is a feat they pulled off most recently with Sister Wives, an open look at Mormon polygamy. All-American Muslim examines a lifestyle that is more common and certainly not as extreme, yet the themes of misunderstanding still run just as hard through the show. It aims to do that by showing that Muslims are Americans just like the rest of us.

All-American Muslim follows the lives of five Muslim families in the community of Dearborn, Michigan, which is home to the largest concentrated Muslim population in America.  Newlyweds Nader and Nawal Aoude were expecting their first child at the time of the taping, and being in their twenties, bring a youthful and, often humorous, presence to the show. The two met early in life since their families were from the same village in Lebanon. The Aoudes both pray five times a day, Nawal wears the traditional hijab, and they both adhere to the holidays strictly.

Dearborn, Michigan is home to the largest Mosque in America and a wide variety of Muslim cultures. According to Nawal this makes Dearborn a place that “literally offers you the religion on a silver platter.” She credits this to the numerous opportunities for study, many mosques, and readily available Halal meat shops. While the community allows them the freedom to worship it also allows them to, as they both told me, “uphold our American patriotism.” Nawal, who works as a delivery nurse, spoke to this: “you know, a part of American life is the work schedule. American life is all about working 8 to 5, 8 to 6, to not stop working. But our work environment actually gives us those 15 to 20 minute breaks to stop and pray.”

It wasn’t always like this in Dearborn. The Muslim population has grown exponentially in the past ten years. As the population grew, the city had to find a way to accommodate their new population. Nader recalled his time in a high school which now allows all students days off on Muslim holidays: “I remember when I used to go to high school and Ramadan would finish and the holiday would come up, a lot of kids would just take off school and then the non-Muslims who went to the school were like “why do we have to come to school if no one else is in the school?”” The city has worked hard to be a comfortable place for them to be Muslim and American, and in the case, make them a real part of the community.

While Dearborn is immediately accessible for Muslims, the surrounding areas don’t always present the same safe space. When the couple travels to nearby Birmingham, they encounter rude “service” at a pancake house in the form of a waitress who delays seating them and then barely speaks to them. The conflict serves as one of the show’s earliest illustrations of the problems that many Muslims face. This incident is especially heartbreaking when you consider how truly wonderful this couple is.

An intriguing aspect to their family life comes from the birth of their baby boy. They truly take a team approach to having a baby, which isn’t common amongst their peers. Unlike most Muslim couples, the two decided to go to birthing classes together. They were the only Muslim couple they knew to ever do the classes. but Nader’s love for his wife compelled him: “I was totally against it, but my wife really loved the whole idea of experiencing every aspect of the pregnancy and you know me being supportive, I wasn’t going to tell her no. A lot of my friends made fun of me for doing it (laughs) but I was looking at the overall picture. It wasn’t about how my friends felt, it was about how my wife felt and how we felt as a couple.”

Nawal’s approach was a little different, reflecting the couples’ different perspectives: “I mean I work in labor and delivery , I deliver babies all the time. So the childbirth classes weren’t really for me, I wanted to do them for Nader. I wanted him to get a good idea of what we’ll be going to.” Nader actually wanted to, and I quote, “youtube it.” We all laughed at that response, but he ultimately admitted that classes were “part of the experience and the beauty of pregnancy.” Their love for each other and for their now son is evident in how they respond to one another. Even this situation which makes them stand out from their fellow Muslims, makes them very natural and normal in the American landscape.

On Trust and Hope

The Aouel’s example is one that encapsulates the power and simple beauty of this program – these are normal people living their normal lives. The couple even attested to this in how they approached having TLC in their home. “In the beginning you just had to be aware that you were on camera in terms of where you’re walking, but for us as individuals and as a married couple, we didn’t really feel any type of pressure from the camera,” said Nader. “We’re very comfortable in our skin and very content with who we are and how we live our life. We had nothing to hide. TLC is a network that we truly trusted in, and we knew they weren’t going to portray us in a negative light.”

Nader and Nawal have very high hopes for what the show can do in America where portrayals of Muslims are often colored by tragic events that actually have little to do with American Muslims. Nawal’s hopes center around her dress and who she is: “What I want viewers to take away is that image of hijab. I would just hope that people can finally see past it and relate to me as they would relate to their mother, or their sister, or their daughter.” “We hope that when people watch All-American Muslim they’ll see past us being Muslims and relate to us as Americans who for me,” said Nader. “I am a father, a loving husband, and for Nawal being a mother, and a working woman.”

Those who choose to watch will certainly see that, and much, much more. Each one of these five families have problems, hopes, and dreams, but they show one thing that is crystal clear: their faith is a part of who they are and their faith is a part of America. They are able to be Muslim and American, and as Nader told me, “the beauty of being in America is that you go after your dreams.” The hope of this show is that in an America that often disparages Muslims, we can all still dare to dream that anything can happen. This includes people of all faiths living in peace with one another, no matter where they come from, what they believe, and how they dress. “God bless TLC for believing in us” said Nawal, and I have to agree.