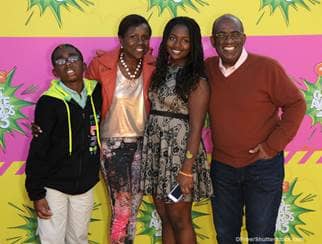 Al Roker and Deborah Roberts need no introduction. Both have soaring media careers, individuality, and personality. In a high-octane business, stress wrecks havoc on a marriage.

The Rokers remain steadfast in their quest to be happy while taking notes during their life’s journey and a 20-year-old marriage. They learned to laugh at themselves and each other in a playful matter to gain insight in their life as husband and wife. Been there Done That, has something anyone can relate to.

“This is our first collaboration,” Roberts asserts waving Roker to the conference call. Yes, there were hesitations, Roker says getting on the call.

“I said honey this would be great,” says Roberts. “It’s one of those things like when you say you’re going to work out together or run together.” There are very few things they are simpatico on, he adds, except for love and their children.

She's a runner and the host of NBC’s Today Show is a big gadget guy. They are the opposite when it comes to films, she likes romance, he likes science fiction. Doing a book together was not on the list for Roker because they're so different, and it worried him. But they wrote each part separately and it’s "Deborah’s voice" and “my voice," he said.

Yes, “it was my take, the right take, and then Al’s take, the wrong take,” Roberts intercepts.

"Opposites do attract,” Roker  laughs. The banter between them is fun to listen to.

They do agree on what it takes to make a family strong.

Roker and Roberts take on subjects like raising kids, communication, and learning to let go of offences in order to remain a strong family unit in the book.

“There are pressures no matter what careers you are in. As much as I like to think that I am an evolved dad. I try to contribute as much as I can to try to make this more of an equal partnership. It more often more than not falls on Deborah, and we talk about that, but we are not holding ourselves up saying we go the answers.”

Faith plays a role in the family’s life and a component in their relationship.

“I think we can’t discount the fact that it means something in our relationship and in our marriage—for us as parents.” At a restaurant in Pasadena, the family makes sure they say a prayer before they pick up their forks.

“Our son won’t let us start without doing that,” Roberts says who attends church service every week with the family. “It’s just part of who we are,” she shares. “I think that’s what contributes to the glue in our relationship.”

Been There, Done That: Family Wisdom for Modern Times (New American Library) is out now, don’t miss it.