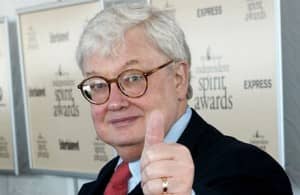 Just one day after announcing he was taking a “leave of presence” to deal with a recurrence of cancer, Roger Ebert died at age 70. His influence, like his greatness, is incalculable.

Ebert was a great critic, a great writer, and a great man. No one will ever come close, in part because the world has changed so dramatically and no one critic will ever have his depth, range, and influence again, but more because no one can ever have Roger’s unique combination of passion, erudition, pugnacity, and, increasingly evident in recent years, a truly extraordinary depth of humanity and generosity of spirit.

There is no greater evidence of that than his response to his illness. As it became more and more difficult for him to interact with the world physically, he became a pioneer in social media. Decades before he was the first to bring a national film criticism show to television and his testy debates with Gene Siskel elevated the way we all talked about the movies we saw. And so it was not surprising that he was one of the first major journalists to establish a presence on Twitter, Facebook, and a blog. They opened him up to a new category of fans. More important, they opened him up to the robust conversations of online media. His interactions with talented writers around the world led to the creation of his Far Flung Critic team and later, his On Demanders, who wrote about non-theatrical releases. He gave his thumbs up — and his audience — to a new generation of critics.

Roger was a champion of the best in film. Watch “Citizen Kane” with his shot-by-shot commentary and analysis and you will never look at that classic or indeed any other movie the same way again. No one was fiercer when a movie was bad, and my favorites of his books include the trilogy devoted to truly awful movies, with titles like Your Movie Sucks and I Hated Hated Hated Hated This Movie. But he was a devoted champion of what was best in film. His great love was the annual film festival he created in his home town of Champaign-Urbana, Illinois, which will have its 15th anniversary next week. Unlike other film festivals, this was not about unreleased new films. Now called Ebertfest, it was originally called the Overlooked Film Festival. It was Roger’s chance to give the neglected treasures a second look. More important, unlike other festivals where participants race between screenings and agonize over the long lines and one-upsmanship of “What did I miss?” Roger’s festival was so civilized that there was just one film at a time. We all watched everything together. And then we all ate together and talked about what we had seen.

Roger was a brilliant writer. I loved his description of the “saturated ecstasy” of Gene Kelly’s dance in “Singin’ in the Rain.” Over the past few years, as he was no longer able to eat food, his sense memories became even more alive. His more intimate connection to his readers inspired him to open up with thoughts about current events and richly detailed memories of his past. His autobiography became a best-seller.

It is impossible to write about Roger without including the love of his life, Chaz. The great transformation of his last two decades came from the opening of his heart as he fell deeply in love and understood the joy of being loved in return. In an interview, he said he understood that was the purpose of his life. In that, he will always inspire me. I loved, loved, loved, loved, that man.