The Call from God

A football referee's call will inspire others who face adversity and struggles in life. 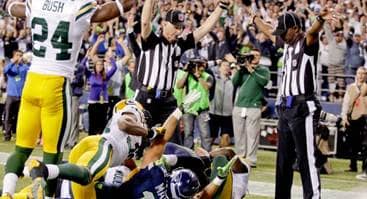 All you can hear is the screaming of thousands and thousands of people. You’re not even supposed to be here but you’ve accepted the challenge and reassured yourself that this is the path that God has planned for you. The thousands of people, in the stands, are still screaming – not to mention 18 million other eyes are watching you from afar. No pressure, right?

This is a light description of the environment that referee Lance Easley underwent during his officiating of the Seattle Seahawks vs. Green Bay Packers, where he called Seahawk player Golden Tate’s possession a touchdown. As the play ended Easley said to himself, “Lord let one man have clear possession! I hope one has clearly taken it away from the other. Let it be obvious that one or the other of them controls the ball.”

The problem was that Tate was not the only player with possession of the ball. To Easley’s dismay Greg Jennings, playing defense for the Packers, also had possession of the ball. Neither man had clear possession. According to the football rule book, a simultaneous catch goes to the offense. Easley’s call struck a note with the media, as the next few days were filled with media frenzies about the call.

Easley was one of the replacement referees, who were officiating games due to the NFL referee lockout, which made circumstances worse. As the media emotionally beat up Easley, fans all over the world were threatening physical harm to Easley and his family. Instead of giving the media additional ammo, Easley turned to his Lord. “Shouldn’t I be suffering persecution,” said Easley. “Everything is about my walk with the Lord. I embrace it and think of it as a blessing. I don’t know where I would be without my faith.”

Despite the adversity that Easley received from the infamous call, he believes that, ”God orchestrated this whole thing.” Easley believes that God has a plan and that he created good works for him to walk in. “I choose to speak about the call because I survived,” said Easley. He decided to write a book that would document his struggles but in doing so also help others who may have or currently are struggling in life.

Making The Call is more than a sports book about a football referee – the depth and truth that Easley discusses can be applied to anyone and everyone. Overall, Making The Call is a book about someone who’s been ‘handed lemons and made lemonade’. Easley could have easily given up on life and allowed the media to infect his life with negativity and demise, instead he allowed God to test him and show him the light.

Romans 8:28 says - And we know that in all things God works for the good of those who love him, who have been called according to his purpose. Easely reinforced this verse by saying, “The noise in life is going to come at you. You’re going to be overwhelmed. You can’t choose to be deaf at that noise.”

Making The Call is a spiritual journey that everyone can relate to. Easley’s call and brave story will help anyone who has ever faced adversity and struggles in life.

For more information on Making the Call click here.