The Best Moments of Bellatrix Lestrange 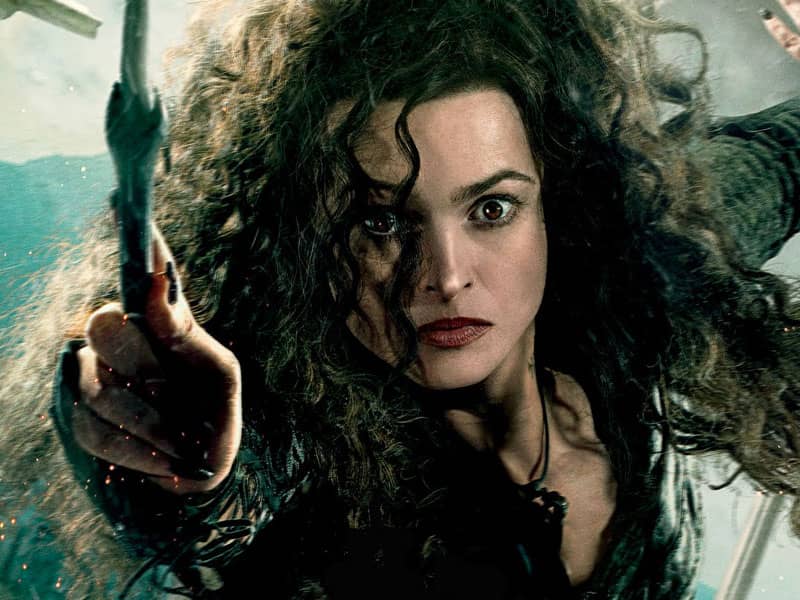 Bellatrix Lestrange is one of the most interesting, frightening characters in the Harry Potter series. A witch “with prodigious skill and no conscience,” Lestrange is a brutal and sadistic woman. Played by veteran actress, Helena Bonham Carter, Lestrange is also undeniably charismatic and interesting, a rare character capable of simultaneously repelling us, and drawing us in.

In the films, Lestrange is the most sincerely devoted follower of the story's primary antagonist, the dark lord Voldemort. Before we meet her in the first film, she is sentenced to the wizard prison, Azkaban for the torture of Aurors Frank and Alice Longbottom, the parents of the character, Neville Longbottom. Lestrange later escapes with the aid of Voldemort, going on to wreak havoc for the next two years before finally being outmatched and killed in the final battle of the series.

She doesn’t go down without a fight, however, and certainly not without her share of memorable scenes that frightened us, impressed us, and just downright freaked us out. Read on to discover the best moments of Carter's Bellatrix Lestrange. 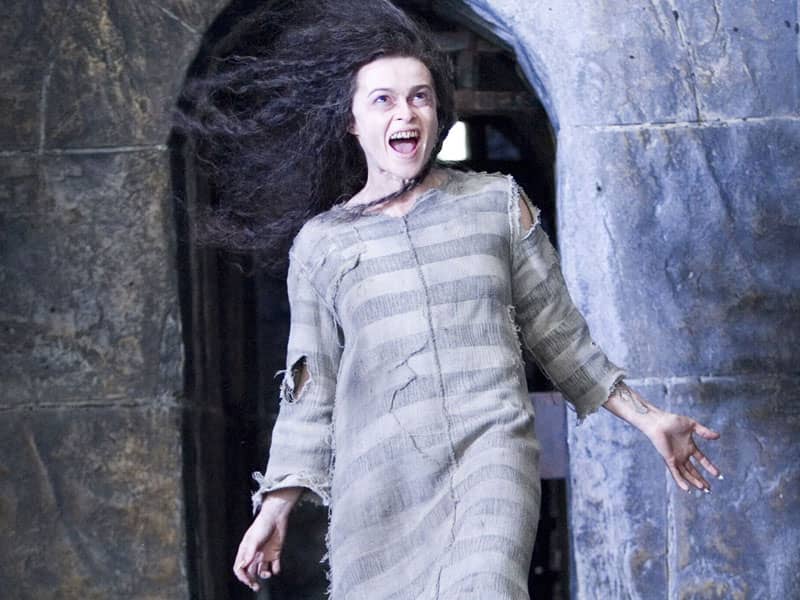 Few actors or actresses have Helena Bonham Carter’s ability to portray insanity—it seems to be a motif with many of her characters. Bellatrix Lestrange is a character who was always unbalanced, but when she is sentenced to years in Azkaban, subject to the whims of the guards, the sanity-destroying Dementors, she loses what little sanity she has left.

Far from being bound to any single moment, Carter’s portrayal of Lestrange’s twitchy insanity comes through in every gesture, every look, and every sound. Carter says, of playing Lestrange, that “It’s always fun playing insane. She’s kind of exhausting to play because she screams a lot, but she was fun. I miss her, actually. She’s innately a child, which is always fun to be childish. Any excuse to be childish.”

The thing about Bellatrix Lestrange is that no matter what she’s doing, whether it’s murdering our favorite characters, screaming, or adoring the dark lord, she’s having a great time doing it, and there’s something about that passion that can put a smile on your face, despite the fact that you know it shouldn’t be there.

A Character We Love to Hate 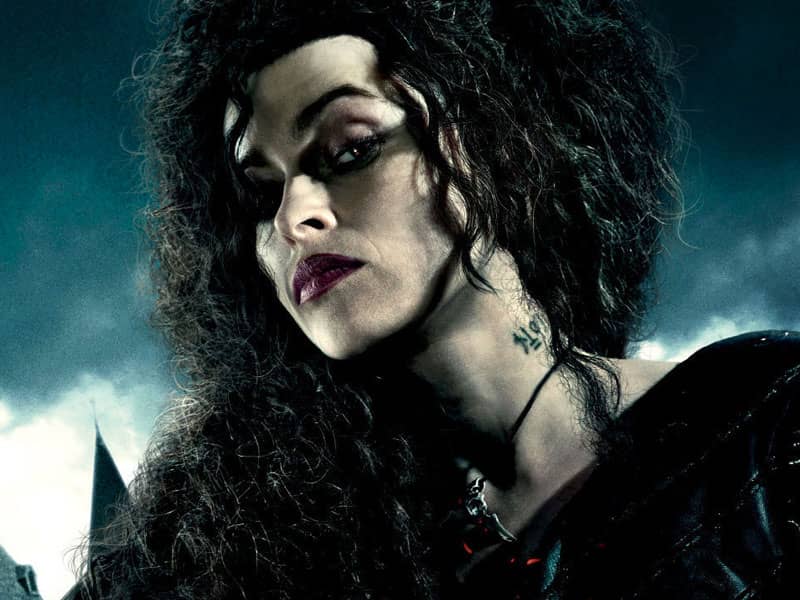 A Character We Love to Hate

Further cementing her status as one of the figures Harry Potter viewers most love to hate, Lestrange takes from us some of our most beloved characters—namely, Dobby the house elf, and Sirius Black. In addition to this, Lestrange is revealed to have tortured Neville Longbottom’s parents to insanity before the story even begins!

But it’s not simply these facts that make audiences feel, that make them despise Lestrange so intensely. It’s Carter’s portrayal.

Sirius Black, Harry Potter’s recently discovered godfather, is the only family that Harry has after the death of his parents as a baby, and audiences keenly feel Black’s death. The look of utter satisfaction and amusement on Lestrange’s face after she kills Black is absolutely heart-rending. That look makes a reappearance as Lestrange realizes that her thrown knife will find its fatal mark in Dobby, the lovable house elf who aids Harry Potter and his friends throughout the movies.

Lestrange mocks the loved ones of the deceased to no end, taunting Neville about the fate of his parents, and, later, calling out “I killed Sirius Black,” over and over as she tauntingly runs from Harry Potter.

It takes great skill not only to make an audience love a character, but to hate one as well, and Carter most definitely delivers here.

A Study in Devotion 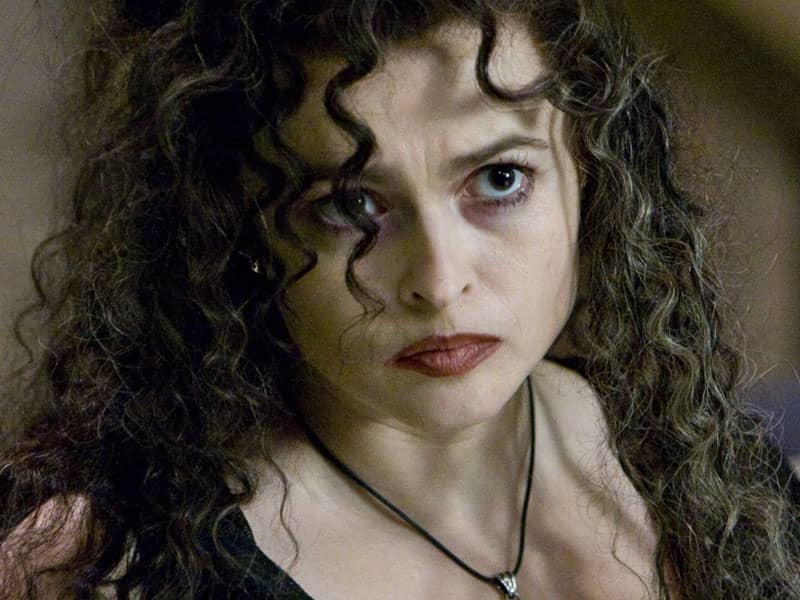 A Study in Devotion

No character in the world of Harry Potter exhibits more profound and sincere devotion to the dark lord, Voldemort, than Bellatrix Lestrange. It is in this passion and devotion that her character becomes truly intriguing. It is also why her character is so dangerous. There are those in Voldemort’s servitude that are mercenary in character—they are in it for personal gain. If someone were to offer them more—more power, more money, more prestige—they would likely defect.

Bellatrix, however, is a different story. She serves with a religious devotion—some might even say, out of a warped sense of love. She cannot be bought. She cannot be reasoned with. There is no force which can entice her to betray her master. Even when on trial for her crimes and facing a lifetime in Azkaban, she sits on the chair she is chained to “as if it were a throne,” proud of her service to Voldemort, and at the fact that she was among the small group of his followers who tried to find him after his first downfall.

The extent of her devotion is made obvious when Voldemort displays an outburst of emotion at her death—something he had never before done at the loss of a servant.

It is precisely this devotion and passion that makes Lestrange an inherently intriguing character—such noble qualities, though twisted and misplaced, fascinate us. 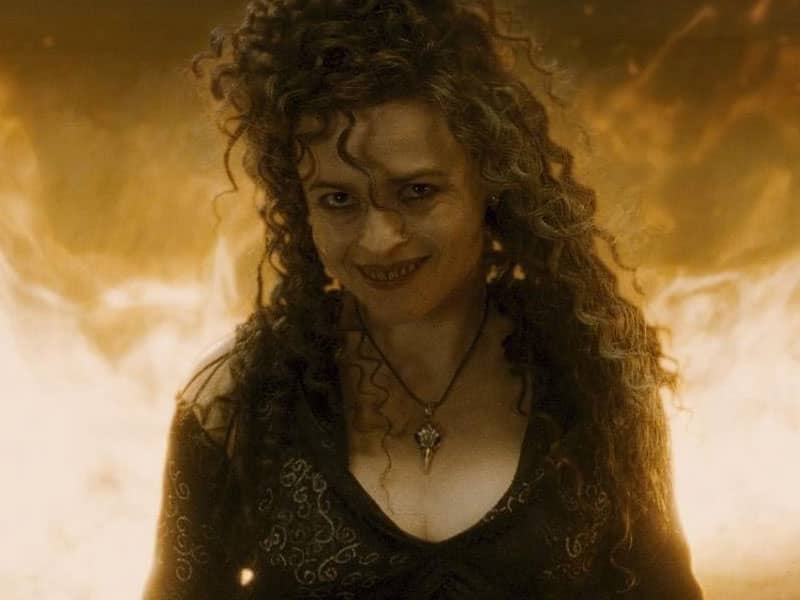 One of the most telling character scenes between Bellatrix Lestrange and Harry Potter is their battle in the Department of Mysteries, wherein Potter attempts to cast the unforgivable Cruciatus curse—a curse to cause terrible agony—at Lestrange after the death of Sirius Black. However, despite Harry’s righteous anger—because of its righteousness, in fact—his curse did little more than knock her off her feet.

Lestrange is merely amused, saying “You need to mean them, Potter! You need to really want to cause pain…to enjoy it…righteous anger won’t hurt me for long. I’ll show you how it is done, shall I? I’ll give you a lesson.”

Reinforcing Carter’s portrayal of Lestrange, this scene shows just how dark and twisted she truly is—she enjoys all of the pain that she causes. The evidence in is her ability to use the Cruciatus curse with such proficiency that she can drive others mad with it.

That, and the fact that we can see the enjoyment plainly on her face. 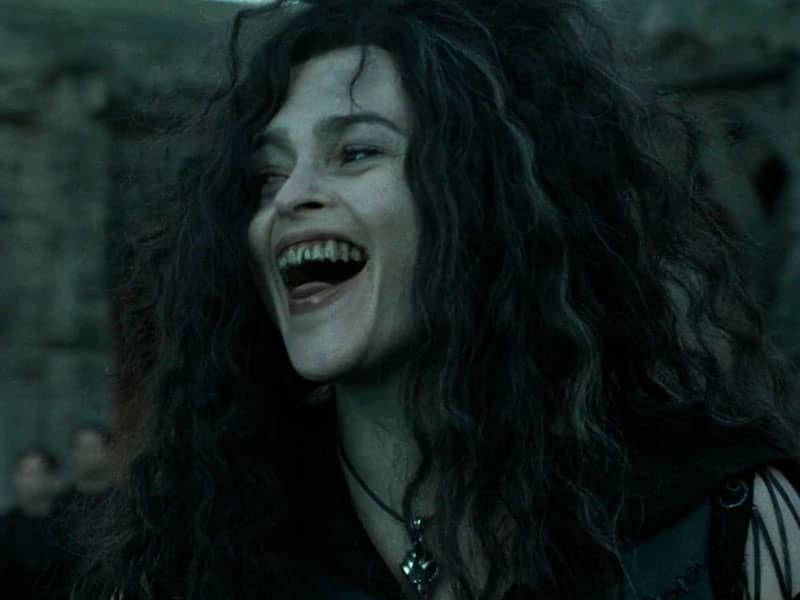 None of us can forget that cackle from the darkness in “Harry Potter and the Order of the Phoenix,” as Lestrange emerges in the shadowed Hall of Prophecy to respond to Harry Potter’s threats.

“He knows how to play! Itty. Bitty. Baby. Potter.”

In one of her best scenes, Lestrange’s words absolutely drip with contempt, reminding us of what Harry is, despite his fame and history—a child in a world of powerful adults.

Throughout the remainder of this scene, Lestrange remains in the background, speaking again only once, to scream at Harry when he mentions Voldemort’s name. But even though Lucius Malfoy is speaking for much of the scene, it’s still stolen by Lestrange as she wanders behind him, making the most disturbing, intimidating faces it is possible for a human being to make.

The effect is one of a leashed dog, terrible and dangerous, and only barely held in check by Malfoy as he attempts to persuade Harry to hand him a delicate object that Voldemort desperately needs. It's the perfect introduction to Bellatrix Lestrange's character. 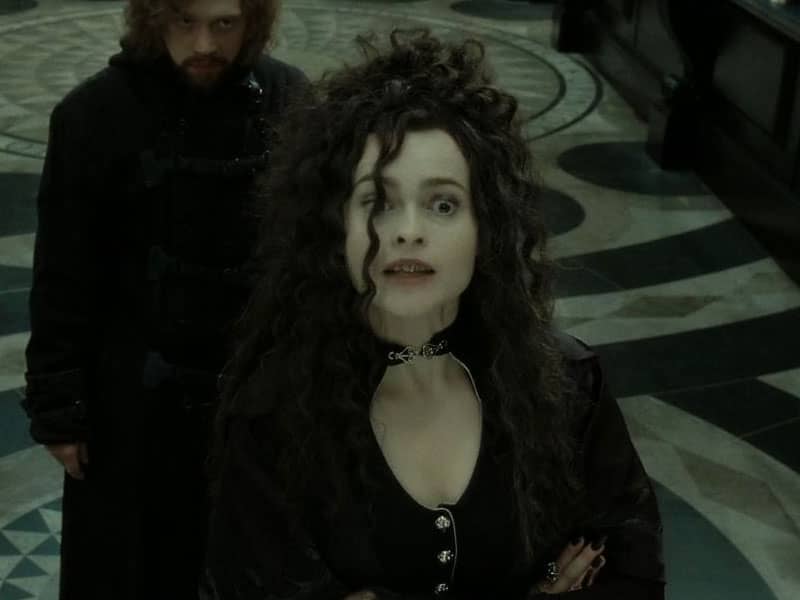 For a scene in which Hermoine Granger drinks polyjuice potion—a potion which allows the drinker to take the form of another person, temporarily—Carter had to mimic the gestures and mannerisms that Emma Watson had developed for her character, Hermoine.

The scene is one of Carter’s favorites, and she says about it that “The best bit about being Bellatrix in this one is also because I got to pretend to be Hermoine. Rather than put Emma Watson in a helluva load of make-up, they just said ‘Now you go act like Hermoine.’ That was fun, because I always wanted to be Hermoine.”

To play another character disguised as her own character, Carter mimicked every subtlety of Emma Watson’s acting, which was, according to Watson, “Uncanny.”

It’s one thing to portray a character, and quite another to portray a fellow actress. The skill and time required to study another human being enough to convincingly play them on screen is great, and Carter does a fantastic job here. 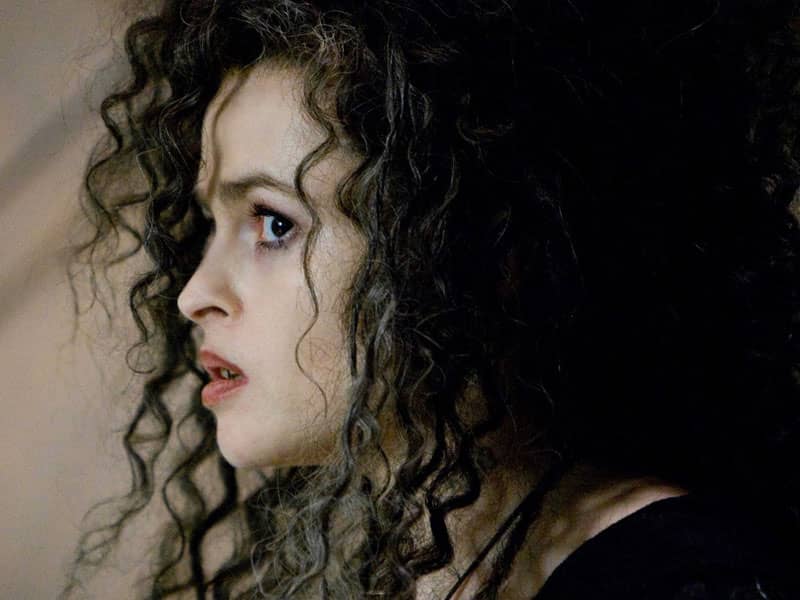 Carter’s performance as Bellatrix Lestrange is one of her best and most memorable—her passion for acting out strange and interesting characters is evident. The dark-haired witch will be long remembered, whether it’s for her insanity, or her ability to make us despise her, or her ability to intrigue us despite all of that—and because of Carter's performance, mostly the latter. 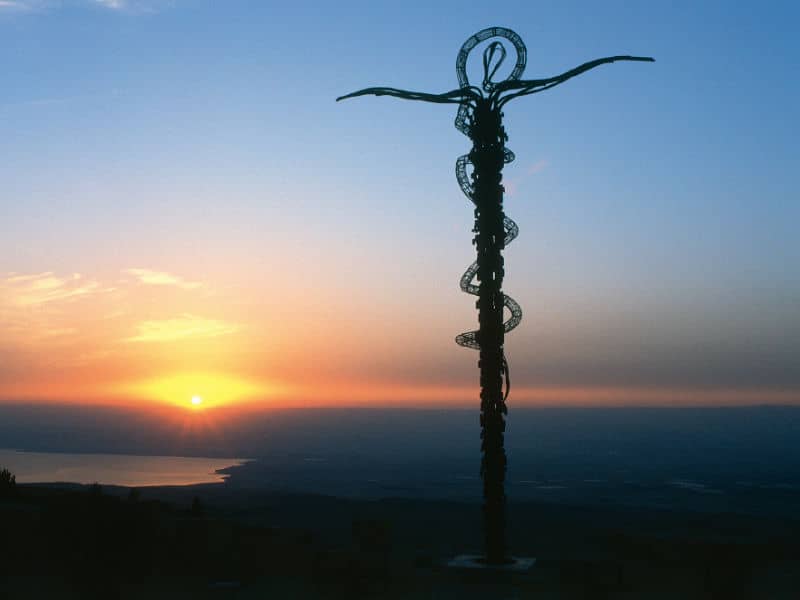 What Does the Bible Say About Jordan?
Jordan may look like a small country on the map, but it's the location of several biblical miracles. Read next feature >
Wesley Baines is a graduate student at Regent University's School of Divinity, and a freelance writer working in the fields of spirituality, self-help, and religion. He is also a former editor at Beliefnet.com. You can catch more of his work at www.wesleybaines.com.