“The Hitman” Hart Takes Cancer to the Mat

WWE Hall of Famer Bret Hart was diagnosed with prostate cancer and will take cancer to the mat like other foes. 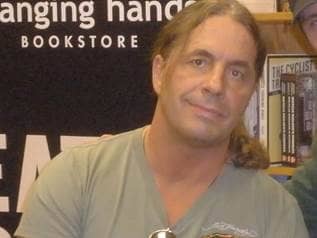 WWE Hall of Famer Bret Hart was diagnosed with prostate cancer and will take this enemy to the mat like other foes.

Hart is a seven-time world champ, has won the WWF World Heavyweight Championship five times, and is part of the Hart wrestling family.

You might recall the pink tights, and fringe leather jackets, long hair, and an electric guitar used when he entered the arena in the 1990s—and kids loved him (he often gave the guitar to them). "I still take being a positive role model for kids very seriously, and I even enjoy the responsibility that goes along with it." Hart came up with the nickname “Hitman” from the Western Hockey League’s Calgary Hitmen.

And he meant business among the flash. His signature move is the Sharpshooter, and has been said to be the best technical wrestler in WWE history. Hart announced in February on Facebook that he received the diagnoses of cancer. Like a champion he is taking it on without hesitation of fear, posting that he will defeat this nemesis. He will not give up.

“It is with great remorse that I feel compelled to speak truthfully to my friends, family and my millions of fans around the world. In the past few years, I've spent more than enough time paying the price for all those years trying to be the best there ever was as a professional wrestler. I executed excellently and my proudest claim was that I never seriously hurt or injured another wrestler in my 23-year career.”

Being honest about the diagnoses is important Hart said. Letting people know that he’s in a fight will help others gain strength.

“I think just by being open and honest about it. Letting people know that I’m in the fight, and as I go through it, I’ll show people just that. Hopefully in the near future I can prove to people that I will overcome this battle and be on the better side of it in six months or so. Hopefully, people will gain strength from that and use me as somebody they can look up to if someone in their family or themselves goes through it.”

People are responding to support Hart. A Marque at Madison Square Garden wished “ The Hitman,” Hart to get well from the MSG. WWE Hall of Famer and former World Heavyweight Champion Sergeant Slaughter posted on Twitter: Attention@Bret Hart: “Chin up, chest out. Put the#Sharpshooter on Prostrate Cancer & that's an Order!!!”

Hart is not alone.

Over two million American men have dealt with prostate cancer, some are well known. Actor Robert De Niro, California Governor Jerry Brown, former General Colin Powell, Secretary of State John Kerry, and Roger Moore all have battled the prostate cancer. Actor Ian Mckellen also is a survivor. “I have heard of people dying from prostate cancer, and they are the unlucky ones, the people who didn't know they had got it, and it went on the rampage," he said.

Hart is being proactive, and made a promise to rise above the ashes to supporters before the battle get tougher.

"I make a solemn vow to all of those that once believed in me, the dead and the living, that I will wage my fearsome fight against cancer with one shield and one sword carrying my determination and my fury for life, emboldened by all the love that's kept me going this long already," he shared on social media.

Hart, 58, is using other tools to help navigate the unknown waters of cancer, and cancer treatment.

What is it for this tough guy that will pull him through? Love, and family is his tool to beat his new foe.

"Love is my weapon and I've got much of it around me all the time, for which I'm truly blessed and eternally grateful. My children, grandchildren and my loving wife Steph have been and will constantly be at my side. I refuse to lose, I will never give in or give up, and I will win this battle or die trying."

We wish Hart the best and to keep on fighting.

Hart, born in Calgary, retired from wrestling after after two decades in 2003 after a concussion.