5 Christian Athletes You Should Watch This Olympics

Expect these Christian athletes to electrify the Olympic Summer Games in Rio.

Rio 2016 is the perfect stage not only for high profile celebrities, but also for up-and-coming talents to shine and transform themselves into household names. There are a number of athletes going to Rio that we admire not only for their athleticism, but also for their faith in Jesus Christ. For these athletes, being a Christian isn’t just a title, it’s also a lifestyle. They are real role models, sometimes highlighted in the press for their faith in action. Here are five Christian athletes you should watch at Rio this season. We can expect these stars to illuminate in the games. Let’s rejoice for these men and women truly wear the full armor of God and for that, we can’t get enough of them. We can also expect these athletes to continue to dominate not only in the Olympic Games, but also in their respective fields.

There appears to be no stopping Katie Ledecky, the softly spoken, Christian teenager who not only approaches major meets with the ease of a day in the classroom, but also reflects Christian values. Many believe the 19-year-old American competition swimmer is well on her way to becoming the Michael Phelps of women’s swimming. After winning gold in the 800m freestyle at the 2012 London Olympics, at age 15 she established herself as the best freestyle swimmer in the world over 200m, 400m, 800m, and 1500m, winning four golds at the 2013 World Championships and five golds at the 2015 World Championships.

Many athletes skipped out on Rio this year, but Tennis superstar Serena Williams was not one of them. She’s embraced the games with the zeal of athletes for whom the event is their Super Bowl. Williams is a four time gold medalist with one singles title and three doubles. The number one ranked tennis player in the world is also a Jehovah’s Witness who has acknowledged God during her wins. She also uses her faith like a secret weapon, showing us her strength and perseverance on and off the court.

Durant is the rare NBA megastar who hasn’t bowed out of Rio. With future Golden State teammates Klay Thompson and Draymond Green, he will attempt to fend off Spain for America's third straight gold. The two-time All Star is also a proud Christian athlete who attended Christian school and has a strong faith background. In a GQ magazine interview, the Oklahoma City Thunder forward spoke about how Hillsong New York City pastor Carl Lentz taught him that God is more about love than following a set of rules. In the interview Durant said, “We live by the blood of Jesus. That’s how I feel.”

Allyson Felix is one of the fastest women in the world and will make another appearance at Rio. She won a 2012 Olympic gold medal, two Olympic silver medals and three world championship golds. The gold-medal Olympic runner and daughter of an ordained minister also uses sports as a platform to promote the Gospel. She describes her running experience as a gift from God: “For me, my faith is the reason I run. I definitely feel I have this amazing gift that God has blessed me with, and it’s all about using it to the best of my ability.”

As golf returns to the Olympics for the first time in 112 years, Bubba Watson, the long-hitting lefty will be the top-ranked player after fellow major winners Rory McIllroy, Jason Day, Jordan Spieth and Duston Johnson pulled out. Watson is a devout Christian. He has credited Jesus and the Bible for his victories in golf. In addition to being outspoken about his faith online and offline, he has a giving heart, devoting a generous amount of money to charities.

We admire these athletes not only for their amazing God-given talents but also for their faith and values. They acknowledge that they wouldn’t be where they are today without the help of God and we couldn’t admire them more for it. Be sure to keep your eyes on these athletes this season. 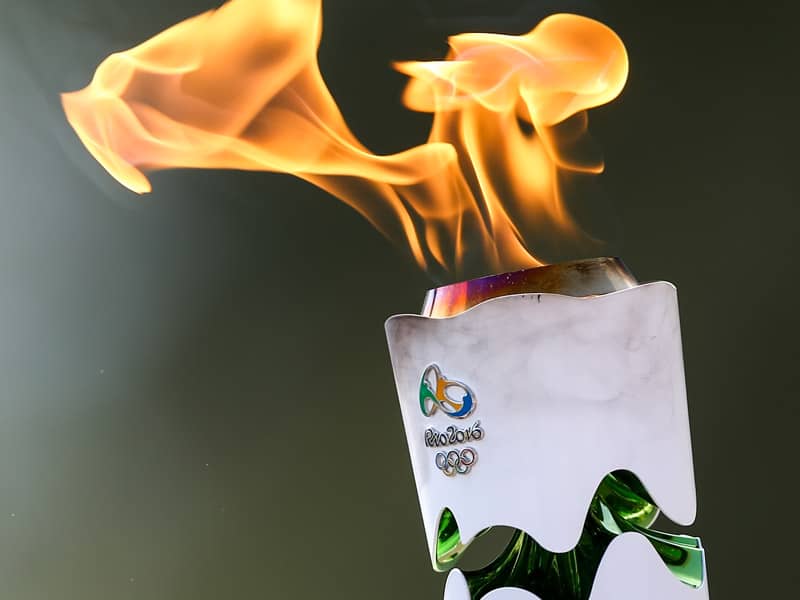 5 Olympians Who Made History
These Olympians were remembered long after the torch stopped burning. Read next feature >
Lesli White is a graduate of Virginia Commonwealth with a Bachelor’s degree in Mass Communications and a concentration in print and online journalism. In college, she took a number of religious studies courses and harnessed her talent for storytelling. White has a rich faith background. Her father, a Lutheran pastor and life coach was a big influence in her faith life, helping her to see the value of sharing the message of Christ with others. She has served in the church from an early age. Some of these roles include assisting ministry, mutual ministry, worship and music ministry and church council.