Do women need more opportunities to prove themselves in the sports world? There is more work to be done, but another glass ceiling was smashed recently. 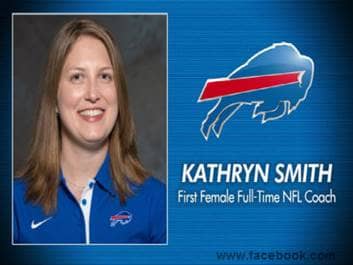 Do women need more opportunities to prove themselves in the sports world? There is more work to be done, but another glass ceiling was smashed recently.

This move makes her the first full-time assistant coach in the league, and could set a new standard for other women, ending stereotypes in all sports. Smith worked under Rex Ryan with the Jets, and as an administrative assistant.

She was also a player personal assistant in New York for seven years. In a statement, Ryan said Smith proved herself and deserves the opportunity no matter what the gender.

“She certainly deserves this promotion based on her knowledge and strong commitment, just to name a couple of her outstanding qualities, and I just know she's going to do a great job serving in the role of quality control-special teams.”

The Bills are not the first to make history in hiring female coaches.

The Arizona Cardinals made news when they opened an opportunity for during the 2015 training camp hiring Jen Welter as a coaching intern for inside linebackers. Welter’s internship was the first time the league gave a female any coaching role.

The NBA hired former WNBA player Becky Hammon was hired as head coach of the Summer League in 2015, leading the team to a championship. Hammon returned to the San Antonio Spurs for her second season as assistant coach where she became the first full-time salaried coach in the league.

“I always say you should be very careful with the voices you listen to. And my closest voices have always told me, 'You can.'"

Women like Smith and Hammon are trailblazers for little girls who dream of having careers in sports.

Females need to take one win at a time and build for a better opportunity for the future, regardless of the industry. The wheels are already in motion, Smith shared.

She stated on the Bills website: “There are so many other females in very important roles in football organizations, whether it’s in administration, athletic trainers, public relations, so many departments have women. Kim Pegula, for example, is our owner. I’m an entry level coach. So yes I might be the first coach, but I’m not the only woman in the building or dealing with the coaches or players on a daily basis. So that’s how I’m looking at it.” The NFL also hired the first official female referee for the 2015 season, Sarah Thomas.