Thrice Says Goodbye... For Now - An Interview with Dustin Kensrue 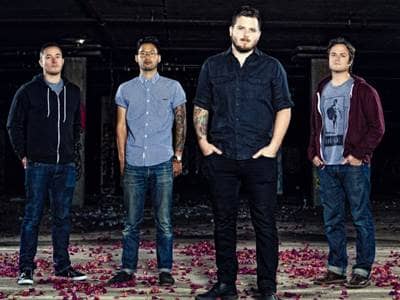 After twelve years of making ever-evolving rock music, Thrice is touring the US on a farewell tour. Lead singer Dustin Kensrue, known both for his versatile hard rock vocals and for leading worship at Mars Hill Church in California, was kind enough to sit down with Beliefnet to discuss the tour, his beliefs, Invisible Children, his career up to this point, and more! Check out the tour and their latest album here!

It is the “goodbye for now” tour, and beyond that I don’t have any other information as far as how long that is. The core of it is that I don’t want to tour anymore right now. I have three little girls, and with them being so young there’s just no way to have them come out and it’s just a long time to be away.

How has that gone within the band?

It’s good, especially right now it’s been a good ride, I think everyone gets that it’s a good time to celebrate what we’ve been doing for a long time and we’ll go out on this break on a high note.

Looking back, what are you most proud of?

I think generally, just that we’ve stuck to our guns in valuing the art over the industry. You’ve gotta make it work as a job too if you want to do it full-time, but that can’t be the driving factor or the thing that you create ends up tainted and suffers. I think we’ve done a good job of keeping that in the forefront throughout our time and that’s become easier as we’ve really instilled it as a practice.

Has there ever been outside friction with the band’s constantly changing sound?

There’s definitely an amount of people who listen to us, or have listened to us, who don’t appreciate the change. After awhile the people who were sticking around were the people who were excited about whatever was next. I think you end up building a relationship of trust, where people trust that whatever you are going to do is your best, and it’s going to be something that you stand behind. Even if they don’t get it right away they have the patience to wait until they do. I have the same thing with certain bands, like I remember back when Kid A by Radiohead came out, it was just not what I was expecting and I was tripping out. One day it just clicked and I loved it.

What is it that has driven the band to change so much over the years?

Boredom maybe? I dunno, I think everyone has very different understandings or feelings about it. Like Ed I think would be the one who wants it to change the most constantly. I think we have a balance, like my concern is more that it’s good than that it’s different. But I think the balance of all our personalities has been a key part of why the band has sounded the way it has and changed the way it has. So it’s always a tension between what everyone wants to do with a certain song or a certain record, so that tension I think is what brings out whatever’s there.

Did the band know before doing the last album that you might be coming to the end of touring?

I talked to the guys about it during writing that record.

Did that influence the album at all?

I couldn’t tell you how… I think everything influences everything when you’re creating. It’s hard to pick that apart I think.

Though you are a Christian, your music hasn’t ever been direct about that. How have you ridden that line and where does that desire come from?

Well, first of all I’m not trying to write about anything necessarily. I’m not sure I have a goal of writing this or that song, I just write about whatever is important to me and my personality is very black and white, big picture questions are what interest me. So, I tend to write about those kinds of things; life, death, God, whatever. I think I’ve probably been influenced by CS Lewis and his thoughts on writing in particular and creation of different art in general. He has an essay called “On Writing Children’s Stories” and it’s really good, really helpful for I think any artist to read, not just someone of faith. This idea that he has is to not try to artificially instill a moral into your work. That will just come across as a platitude or a cliché. It won’t be in there naturally, it won’t sit with it, it will be alien to it. He basically says that if you are transformed at a deep level by whatever truth you believe then that’s going to work itself out into your art.

A good example of that is how all of Narnia came not from what people would assume; that he wanted to teach people certain things about Christianity and teach it to children so he wrote it in a certain form. He wrote it from an image that he had had in his head since he was a little boy of a fawn in a wood, in a snowstorm, carrying a parcel and an umbrella. That image had just been with him for a long time and that’s where the whole thing spun out of because he loved that image and he wrote from it. So, I try to do something similar where I have an image or a line, and I just write. At certain points you are kind of guiding where it ends up and fine tuning it, but you’re not starting out with this “I need to get this idea across in this kind of song.” Just letting it flow a little more naturally is really helpful.

Have you always written that way?

It’s hard to look back and dissect when I consciously started observing certain things about why I did things, but generally I’ve always written that way. I think I’ve understood it better in later years.

So, what is your specific faith background?

I was raised in a non-denominational Christian Bible church. My mom was a believer, my dad was not until I was older, maybe ten or eleven. I grew up in the church and was kind of the kid with all the answers in Sunday school. So I was really proud of my knowledge of theology at a young age but that really was not a healthy thing. I was always very critical of my faith, making sure that it warranted belief and testing it, finding evidence for it or against it. That had gone fairly well until I was in my early twenties. I had a couple of years that were rough because I had come to realize that I didn’t have all of the answers and that really freaked me out. Through that I really was taught what Biblical faith looked like. Nowadays we kind of contrast faith and reason, but that was never the way that it’s used in scripture. Faith is closer to what we would call trust, so whenever the biblical authors would talk about faith, that entailed trust based on good reason. So, like you would have trust in maybe a friend or your parents because you knew their character so that was good reason but you might not understand what they were doing at any given time but you still trusted them. So, in the same way we have good reason, I would say, to trust that God is who He says He is revealed in scripture, but we’re not always going to have every answer to every question.

So that was kind of a big milestone, and then coming to a more reformed or monergistic view of Christianity maybe five, six years ago was another big milestone. I hesitate to say certain names just because they become like fighting words or divisive things, but generally stuff that would fall more in a Calvinistic scheme than an Armenian one. Like the idea that God is sovereign over salvation and that basically we’re incapable apart from His regenerating of our hearts. That we’re sinners in that apart from changing our hearts, changing our desires we can’t rightly choose Him. So there are a lot of reasons why I hold to that now but the reason I think it is important is that it completely changed the way that I view my faith from top to bottom. Just because it then becomes not about me working to please God, which I would have never put in those terms but functionally that’s how I lived, and now I work out of gratitude for what God’s done for me.

Did that darker time in your faith come out in any of the band’s earlier albums?

Yeah, I mean I think, that’s another thing that’s been helpful at least for people who have been into the band, is that I try to be pretty honest about where I’m at, where I’m looking towards. The dark kind of period was more towards The Artist and the Ambulance, there’s a lot of questioning, doubts. Then some of the reformed stuff was going on when I wrote Beggars so you see that kind of reflected on that record, like in “The Great Exchange.”

With the other band members not necessarily being believers, has that ever been a point of contention?

I think because of how I do things it hasn’t been a huge issue, I can count on one hand times where there’s been “Can we change this?” “an we address this?” kind of thing. I try to be respectful of the fact that I’m in a band with people who disagree with me on some pretty major stuff, and so if there’s something that’s really making them uncomfortable I don’t think it’s in any way wrong or selling out my convictions to be accommodating. That’s just reasonable. It’s not “my” band.

You guys are huge supporters of Invisible Children, which has recently gotten a lot of notoriety and controversy. Since you talk about it during your shows, how has the reaction been different than in the past?

I think the initial reaction when I talk about it has been a different feel because people do have those questions, they’ve heard this or that. So I try every night just to address that we’re not unaware of these things that are going around and we wouldn’t have them out with us if we didn’t have confidence that they were totally on the level. I mean, there was just some unfortunately timing with some stuff, and anytime anyone or anything gets elevated to such a high profile there’s just intense scrutiny and also a lot of ill will mostly because if something’s high profile you can raise your profile by attacking it. So I think just a lot of that’s been very uncharitable, very short sighted. They have a very different model for how they run their organization than a lot of non-profits but it’s for a reason and I think it’s worked very well. When a lot of people look into that stuff they are failing to appreciate that it is a different model, it doesn’t mean that it’s screwed up.