Talking Music and The Sing-Off With Rachael Lampa

The Dove award winning vocalist discusses her appearance on the hit show and her new album. 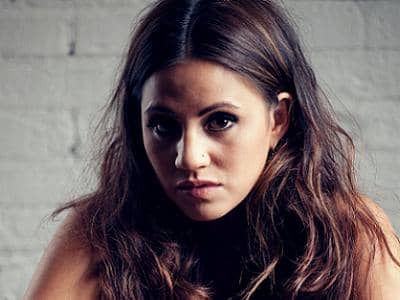 Rachael Lampa is a name that long-time Christian music fans will know, but thanks to NBC’s The Sing-Off she will soon be known by many others. The Dove award winning vocalist will be appearing on the hit show with Nashville’s newest a capella group The Collective. Rachael’s busy fall season also includes the September 27th release of her new album All We Need. All of these things are just a new part of the interesting journey that has included a stint as a backup singer for American Idol winner Jordin Sparks.

I was fortunate to make it on the busy singer’s calendar so that we could discuss The Sing-Off, her new album, and her interactions with Britney Spears.

How did your Sing-Off group The Collective get started?

It’s funny, we formed about a month before we started taping, about three months ago. Our friend Jeremy Lister was on the show last year. He was the lead singer of the group Street Corner Symphony who got second place. He was asked by NBC if he had any friends in Nashville that might be interested in the show. They came up with a plan to put together a bunch of lead singers and solo artists who had never sung a capella before, and to throw them in a group and put them on the show. So that was kind of our whole forming process, and none of us had ever sung a capella before and we just gave it a shot. It was a lot of fun and we felt like we might be able to be good eventually (laughs).

How was a capella different than what you’ve done in the past?

Oh man, it’s a whole other thing. Obviously, no instruments, it’s all vocals. You have to fill up every hole with vocals, you basically have to make up for the band with your voice. So that’s a whole other thought process, to think “okay what would the guitar do, and what kind of rhythm would they be strumming at, and what kind of notes would they be playing?” Just that whole process. In my group specifically there are nine of us and now eight other people are totally relying on me singing perfectly in tune and not messing up any words (laughs). You don’t think about that when you’re a solo artist because you know, you do your thing and if you mess up you make it look like you did it on purpose (laughs). But, it’s hard to hide when there’s nothing to hide behind but a bunch of voices, so it was a challenge. Every week we had to come up with arrangements for songs and for some groups that were there it was like “oh yeah we know how to do that” and they’d dive right in, for us it was a lot more of a process. It was a really fun challenge and we loved it.

So you arranged the songs yourselves?

The show had people to help us out for sure, they had a music team and they would come around and make sure we weren’t about to embarrass ourselves on national TV (laughs). But yeah, we played a big part in the arrangements.

Let’s talk about your new album, tell me about it from your perspective.

The record is called All We Need, it is named for one of the last songs that I wrote for the record. When you dive into writing a record you kind of go in with a certain goal of what you want to say as a whole. Rarely do you just kind of throw a bunch of random songs together. There’s usually a theme and something that you want to say. For me, I knew what it was but I couldn’t really say it, but I was writing all of the songs in that direction. I had just come off a five year break from writing a full record, I only did a small EP. During that time I was revamping a lot of things in my life and rethinking why I do music and what I’m doing it for and I kept being broken down, in the good kind of way, where I just was forced to simplify my life, to simplify the way that I look at the world, the way that I look at God, the way that I look at music. It was this awesome awakening of becoming childlike again, especially in my faith, and just remembering why I fell in love with Jesus in the first place and a lot of that had to do with the fact that I found myself as just a child, a helpless kid who needed her God.

The question that kept coming to my mind was that I felt like God was asking me “Am I all you need? Do you need music? Do you need money? Do you need friends?” It was all these things where I had to really say “yes, you are all I need” and only at that point was it healthy enough for me to start making records again, because I think I got to the point where music defined me and my faith. If my music wasn’t doing well then my faith must have been wavering. I was connecting everything to my music and not to God, which is a big reason why I was becoming burnt out. So once I kind of realized that I really dove into this record. “All We Need” was kind of that one song where it was like “that’s what I’ve been trying to say!” The whole record kind of revolves around that thought and I’m really proud of it.

How do you feel like this record is different than you past releases?

Musically I’ve grown a lot. I’ve kind of honed in on what it is that I love to sing, and that is a pop/soul kind of feel. I grew up on soul music, soul singers, just anything with a little bit of soul. I also went through a lot of phases of “Am I a rock singer? Funk? Indie folk?” I just realized, you know what, I think I just have to deal with the fact that I’m a pop girl (laughs). I just like pop music, that’s the other thing that I grew up on. So musically that’s kind of where this record landed and obviously in my writing too. I grew, but I wouldn’t say that I changed too much. I listen to it and I think “You know, it’s me.” For older fans I feel like it’s not this whole 360, it’s more growth.

I know you said you’re a pop girl, who are your specific musical influences?

I guess the first things that I ever listened to were Stevie Wonder, Bonnie Raitt, and Eric Clapton. That’s where the soul stuff started, and then I moved into the Mariahs and the Whitneys of the world. I didn’t actually know any Christian music until I started singing it. I thought Christian music was Whitney Houston’s Preacher’s Wife, I didn’t really know much about it so when I started listening to that I started listening to Sixpence None the Richer, Mute Math, and Plum. I loved all of those artists. Now I’m on the Adele train (laughs). I know everybody’s listening to Adele and I love her music, I also love Natasha Bedingfield, they’re just great singers with great songs.

How do you think that Christian music has changed since you started out?

People’s minds are opening, I think, on what exactly Christian music is. If it really is a formula or is it something that moves you to worship. For me, that’s the definition of Christian music. I turn on the radio now and I hear the Fray or Switchfoot and I’m moved to worship, and it’s especially cool when you can hear that on a mainstream radio station and the whole rest of the world doesn’t know what’s hitting them. Christian music is embracing that more and the fan base is becoming younger too which is allowing for the newer sounds and newer style of music. It sounds like everything else on the radio but it’s coming from a heart that loves Jesus. It’s a cool thing to watch happen in people’s ministries. I think that’s what we are called to do, to meet people where they are. Music is probably one of the most powerful things in our culture so I think that’s really cool.

So I know that you toured with Jordin Sparks, and one of those tours was with Britney Spears, did you get to meet her?

You know it’s funny, I was around her all the time and we would acknowledge each other, but there was never a proper introduction on that tour. I had met her before that, you know I doubt she put it together (laughs). She was pretty protected on that tour, she’s always running somewhere and there were always a lot of people around her so I never really got the chance to sit down with her.

Man, it was exactly what it was called, it was called the circus tour (laughs) and it felt like a circus. We basically had a circus traveling with us. We had fire throwers and guys on stilts, all these crazy acrobats. It was a really entertaining show every night. Every night everyone was blown away by the show that we put on. It was cool because I was friends with some of the dancers before we got on the tour and I knew that they were Christians. I asked them “what is this like? Playing along with the show? It’s not necessarily the most wholesome show, how is it trying to balance that?” My one friend answered in the coolest way, he just said “It’s my job to love these people, and I’m a sinner too, and we all need to just love each other as hard as we can and pray as hard as we can and really just know that God is a big God and He is doing work 24 hours a day, not just when we’re on stage. When we have our off time God is still working and we are still His people. We have to always be doing His work.” It was a really cool time to actually minister in that situation.

Click here to pre-order All We Need from Amazon.com!