Singing the Experiences of a Community 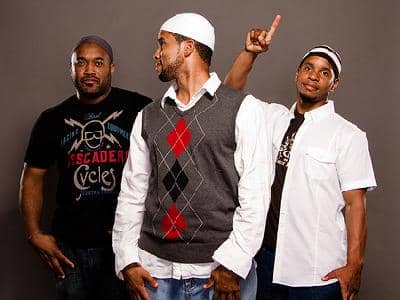 Native Deen is an inspiring trio of American born Muslims who were brought together by the same passions – hip hop, Islam, and positivity. The group speaks a message that is as important to their Muslim community as it is to people of other religions. It is a message of keeping the faith, loving one another, and standing together in the midst of trials. The music is unique and creative, using only vocals and percussion in accordance with Islamic practice. It strikes a balance between rap, R&B, and tradition that is rarely heard but worth experiencing. Through that their creativity has garnered an international fanbase and become one of the hottest groups in the Muslim community.

With their album The Remedy launching this past July, I had the privilege of talking with Joshua Salaam and Abdul-Malik Ahmad from the group. While third member Naeem Muhammad was unavailable, it was clear that this trio speaks as one very creative whole.

How did Native Deen get started?

Joshua - Our artistry began with an organization called MYNA (Muslim Youth of North America). They had youth camps, and we were some of the entertainers that were coming up in those camps. We met each other, and they ended up putting a product out called MYNA raps. That started in 1992, and grew in popularity over 8 years. In the year 2000 [the three of us] were all living in the same region, and when MYMA raps 5 came out we were the only individual artists who put anything on it. So, since we now had proximity to each other and we were the only three artists on the album, we started to feel like a group. We started performing together and a couple of years later we gave ourselves the name Native Deen.

What does the name mean?

Abdul-Malik - It has a couple of meanings. Deen means “religion or faith,” so when we say Native Deen we feel like this faith of ours is something that is native to us. The name also evokes the meaning that we are also native to this country. We grew up here, we were born here, we’re indigenous Muslim Americans.

The album is so vibrant. What is your creative process like as a group?

Abdul-Malik - We all come from different backgrounds. You can see a hip hop vibe going through the whole album, but there’s a lot of other influences. The main thing we try to do is write what we’re feeling, what we’re experiencing, what our community is experiencing, and what our friends are going through. We try to address issues that we feel are most relevant. However that comes out to us, whether it’s in a more hip hop kind of song or a slower tempo song. I think to us the lyrics and the message is the most important thing. Our main audience is the younger audience, so we try to keep it upbeat and hip, and we try to make sure that whatever we do the lyrics are meaningful. I think that’s where we stand apart from other groups.

Your lyrics are rooted in Islam, but is there a passion from you guys to write music that pulls in other faiths?

Joshua – I think you hear that on all of our albums. Sometimes people only listen to the marketed song, the one that has the video, things like that. If people actually listen to our album, you find on all of our albums even going way back to MYNA raps, there’s some songs that are very generic and that appeal to wide audiences. In fact in our travels we’ve met people of other faiths. One of the situations I like to recall is when we ran into a priest. When he found out we were Native Deen he called his son over and said “hey it’s Native Deen!” He listened to the music with his son, because it’s positive rap music and he never felt like we were proselytizing him. On all of our albums you find songs that are good for all audiences, but on most of the songs there is a strong Muslim influence. That’s one thing we always hope for, that our music will go beyond our community. Yes we speak mainly to our community. But our goal is really to let people from other faiths know a little bit about what we are saying to each other and how we feel.

What is the make-up of your fan base?

Abdul-Malik – It’s a very wide audience. It’s a lot of young people, but we just got a text from a guy who is 60 years old telling us how much he likes the songs. People as young as 2 year olds like it, a mom told us once. We have people who are African Americans, Immigrants, Arabs, Pakistanis, all different walks of life. What we try to do in making our music, is we try to write for our community, but we do try to keep it generic so that a song can go beyond one age or one ethnic group or one religion even.

What brought you guys to that place where you knew you wanted to make music that was Islamic but could also reach out to each other? Did you start out with that being your focus?

Joshua – That was grown into. When we started out we were just youth expressing ourselves. People do art based upon their experiences and what they have in their minds, very seldom do you have artists who say “I draw art that appeals to the upper middle class.” You just do your art and then people who are interested in it tend to move towards you. When we made the songs we were just expressing ourselves and I think only after it started filling a void in the community for Muslim English music did we feel a certain amount of pressure. We started to feel a sense of obligation that we have to write towards certain things. Now it’s a little bit of balance, there are some that really come from within us, and some that are written because of a simple obligation to address a challenge the community is facing.

Do you feel like there are any unique challenges to being a Muslim rap group?

Abdul-Malik - Sometimes we get invited to interfaith events, like one on the mall where they brought in a bunch of artists of different faiths. However, usually our main audience is Muslims, and Muslims in the United States are very spread out. A lot of times we have a concert and even though we may have a lot of fans in that area, just networking and letting them know we are coming into town is sometimes an issue. In other Western countries, like the UK, Muslims are very close together. Like you go to a certain town and they are all Muslims, and they have certain areas in the UK that is totally Muslims. So word spreads to everybody. Here it’s a little more spread out, so we find it’s difficult to gather everyone and do a strong tour. We’re working on it and I think over the years it will develop better.

Joshua – Sometimes it is how strong the promotion is. I think the Muslim community is in need of really good promoters who know how to promote an event.

What are each of your musical influences?

Joshua – A lot of Motown, the Jackson Five, the Supremes, and the classics from the ‘60s and ‘70s. Of course I was listening to a lot of hip hop in my youth but I wasn’t that into it. So, the music was, I guess, in my blood, it affected me as I was writing and coming up with melodies. The real influence for me though was Motown.

Abdul-Malik – I guess for me it’s very hard to put my finger on one music. I grew up in a more conservative household where my parents would say “You want to listen to music? Well here’s some classical music!” But all around me there was hip hop and pop music that you hear on regular basis. That’s definitely influential, especially for a young person. As I was growing up, guys like Run DMC were what everybody was listening to. They definitely had an influence on what I was listening to.

Joshua: Naeem (the third member) has his own set of influences, he’s all music. He loves the Beatles, old-school rap, Motown. He’s probably got the most diverse musical background of all of us.

Who are you all enjoying in currently popular music?

Abdul-Malik – One of the people inspiring me is K’naan, the Somali rapper. His lyrics are very deep, it’s not like some of the stuff that is coming out. There are other artists who I feel have positive messages and they go a level deeper than the normal pop artists. Lupe Fiasco is another rapper. For me, I just try to hear what’s out there but I also try to leave creative space for myself to try to develop my own ideas. I don’t listen to too much music because then I start imitating other artists. I find personally that I need the creative space.

Where do you feel like this group fits in to the current stage of rap and hip hop?

Abdul-Malik – Well, I think honestly we are worlds apart from the stuff that’s coming out. I think that rap lately has been derogatory towards women and talking about sexuality, but I’ve noticed that there are trends in music. I’m hoping that we would be maybe pioneers, along with other groups, in bringing rap back to what it used to be. It used to be about cultural change, it used to be a lot more positive. It’s always had that revolutionary, almost angry feel to it, but it was once about social change. I’m hoping that it will return back to that.