Rapper King Louie speaks up against gun violence after being shot in Chicago. 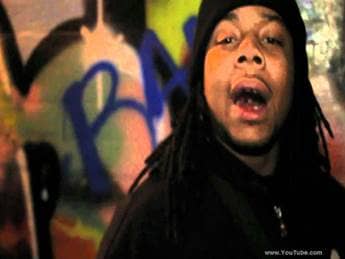 The number of people killed by firearms a year continues to impact cities nationwide. An estimated 153,144 people have been killed by guns between 2001 and 2003, MSNBC reported.

Over 24,000 people were injured from firearms in 2015. When rapper King Louie was shot at after leaving a friend’s home in Chicago, which left several wounded and two killed, before Christmas 2015—and the 27-year-old spoke up. During an interview with CNN Louie shared how he was hit seven times after 20 shots rang off.

Three of the slugs are with him today, he tells CNN’s Don Lemon. One slug remains in his head and two are in his chest.

“I don’t think I’d be here today if it wasn’t for prayer so I deeply appreciate all the prayers people had made for me, my family, ‘cause they kept me strong and got me through my situation,” he offers.

Gun-related crime is up in Chicago and the city leads New York City and Lose Angeles. “The devil’s working overtime,” referring to the “evil” and prominent gun violence. “I think there’s hope for Chicago,” the Chicago native says.

The rapper, who name is Louis Johnson Jr,. also adds that he' s not giving up hope for peace in the city saying  “I think there's hope for Chicago.”

But he criticized the city’s police force and said they are just as bad as some gangs. So he’s working on a campaign in the city called “Music vs. Gun Violence”  to urge people to put the guns down.

"Chicago Ideas is a unique nonprofit platform designed to inspire action through accessible events, grassroots initiatives and thought-provoking content. As a part of our mission to spark ideas into tangible social action, CIW is bringing together musicians, activists, and social and community leaders to take a stand against one of our city’s greatest challenges: gun violence."

King Louis is not the only celebrity making a stand against gun violence. Kevin Bacon, Sofia Vergara, Jennifer Aniston and Amy Schumer made a video after the mass shooting at Umpqua Community College in Oregon and in San Bernardino, California. Stating: “We can end gun violence.”