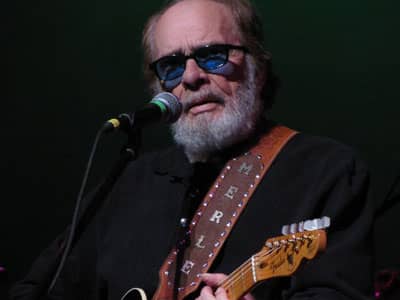 Merle Ronald Haggard, an American country and western singer, songwriter and guitarist changed the way country music was made. He passed away on his 79th birthday, due to health complications. There is no other figure in country music that affected the way songs were written and how they could be sung as much as Merle Haggard did. Haggard had a 49-year recording career that yielded 38 No. 1 country hits, a run that can only be exceeded by Conway Twitty and George Strait.

Hollywood stars expressed a great sorrow for the loss of such an amazing man and musician. Son Ben Haggard, a country singer in his own right, shared a photo of him with his father stating he was “the best country singer that ever lived.”

Haggard had canceled tour dates last winter after he was diagnosed with double pneumonia and hospitalized for two weeks. He cancelled further shows this past January after the double pneumonia returned. At the end of March, Haggard pulled the plug on all future shows per his doctor’s advice. He spent his last days in hospice care in Palo Cedro, California.

Haggard was born in 1937 outside of Bakersfield, California. His family struggled financially as he was growing up and Haggard quickly turned rebellious after his father died when he was 9. Haggard was in and out of reform schools and also ended up in and out of jails as a young adult.

While Haggard was in prison at San Quentin, he began to take music seriously after getting to be on hand for the Johnny Cash performance that was captured for the iconic live album At San Quentin. It was after this moment that Haggard was dedicated towards turning his life around. He worked in hard labor during the day, while his nights were spent focusing on music.

Upon his return to Bakersfield, Haggard made a name for himself in the local music scene. After a short stint playing with rising country star Buck Owens, he was able to land a gig playing bass for California country star Wynn Stewart. Haggard signed on as a solo artist with Tally Records in 1962.

Haggard brought a different sound to country music, later named the Bakersfield sound, by pairing it with electric guitars and having a hard-rock mentality. His new vocal harmony styles in which words were minimal and using the twang of Fender Telecaster had not been heard on the more polished country music stars albums of the time. Haggard’s shift in sound would later redefine how country music was listened and appreciated.

His first single was a cover of Wynn Stewart’s “Sing a Sad Song,” however it was Haggard’s own music that made him such an influential part of music history.

Haggard released deeply personal songs including “The Bottle Let Me Down,” “Branded Man,” “Sing Me Back Home” and many more. He quickly developed a reputation as one of the most serious, hard-hitting artists in country music due to the rawness and personalization of his lyrics. His ability to tell a story through his music drew in many fans and critics.

Haggard’s most successful hit, “Okie from Muskogee”, came out in the fall of 1969 where it spent four weeks on top of the country music charts. The following year both Nashville’s Country Music Association and the Los Angeles-based Academy of Country music picked it as the genre’s top single.

He remained successful throughout his entire career, especially in the 1970s and into the 1980s. Major hits included “If We Make It Through December,” “Ramblin’ Fever,” and “That’s the Way Love Goes.” He continued to stay very active in the music industry, releasing an album with Willie Neslon in 2015 titled Django & Jimmie. The album debuted at No. 1 on Billboard’s Country Albums chart. Haggard released his last solo album, “Working in Tennessee” in 2011.

Haggard was a man who was strong in his opinions, and it was frequently pushed in his songs. He sang about social and political issues, such as interracial romance (Irma Jackson) and illegal immigrants (The Immigrant) in the same way he sung with empathy for the inmates he had met early on in life. Through his music, he was able to start conversations about political issues that wouldn’t otherwise be said.

More recently, Haggard performed two songs criticizing the media’s coverage of the Iraq war in 2003’s That’s the News and about the war itself in Rebuild America First. In 2007, he wrote a song in support of Hillary Clinton’s presidential candidacy. Most country music radio stations avoided playing the more controversial music Haggard would put out, however it never stopped Haggard for continuing to speak out for what he believed in.

Merle Haggard was a devout Christian, stating “It’s almost embarrassing to know that the Lord cares that much for me, but I’m going to shout it to the world.” Much like his late friend Johnny Cash, Haggard was no saint. It was only later in life that he more openly spoke about his faith and studying the Bible. He never made the notion that he was perfect, and encouraged others to turn to the Lord regardless of their past. His ability to inspire others was an amazing trait that many admired.

Haggard was very vocal about musicians that inspired him throughout his career. He released two tribute albums honoring two of his favorite artists, Jimmie Rodgers and Bob Willis. In 1983, he released a version of “That’s the Way Love Goes,” which was co-written by another artist he admired, Lefty Frizzell. The song spent over 21 weeks on the charts and earned a Grammy for Best Male Country Vocal Performance. The influence went both ways, and artists such as George Strait, Miranda Lambert and Eric Church have cited Haggard as a huge influence on their personal music careers.

While the legend had a fantastic career, his personal life was not always as stable. Haggard was married and divorced four times before marrying his fifth wife, Theresa Anna Lane, in 1993. Haggard also had six children: Dana, Marty, Kelli, Noel, Ben and Jenessa. His health was also a main concern, having to undergo angioplasty in 1995 to unblock clogged arteries and had to have part of his lung removed in 2008 after being diagnosed with non-small-cell lung cancer. While this halted him slightly, he resumed performing up to 100-plus shows a year. Despite his problems, Haggard always returned to the stage and remained active performing up until the very end. Haggard had a dedication and love of music that was unrivaled.

No one approached the subjects of the time quite like Merle Haggard did; leaving his fans feeling they could always find a piece of themselves in his songs. Merle Haggard was an incredible performer, but most of all a master storyteller.

“Merle’s power has always come from the truth that he tells… about life and love and everything in between.” – President Barak Obama, 2010

Megan Bailey is a Writer at Large for Beliefnet.