'90s rock hit makers give back to their hometown with more than just music, and they are bringing that back too. 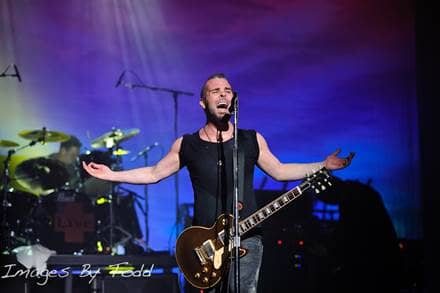 A wise person once told me - “You know you are old when you live to see one of your favorite bands change lead singers.” They were right – I do feel old – but I am also ecstatic, and I’m not the only one. The 1,200 people gathered at the Strand in Live’s hometown of York, Pennsylvania were just as thrilled as I was to welcome Chris Shinn to the front man position that was made vacant by singer Ed Kowalczyk in 2009.

The show was a homecoming “tour dress rehearsal” for the three original members of Live - guitarist Chad Taylor, drummer Chad Gracey, and bassist Patrick Dahlheimer - who put York on the map in the mid ‘90s with a string of radio hits including the eternal “Lightning Crashes.” It felt like a homecoming for Chris Shinn as well. Shinn has been around a long time, working with past and present members of groups like Blind Melon and Pearl Jam, but he has never found a place to really shine. The music business is tough, and Chris has been on the verge of breaking wide open since his career started.

He has definitely found a home in Live and their city.

When I say homecoming I mean it. I met the bass player’s mother for goodness sakes (she is so sweet!). What set this homecoming apart is how Chad, Chad, and Patrick are giving back to their community. York, PA has fallen on hard times. The band even wrote several songs about that very subject on their multi-platinum smash Throwing Copper. But rather than abandon the town in the wake of their fame, the guys have decided to invest in it – literally. They are working to bring business to York in the form of building renovations and helping out musicians who are trying to make it just like they did. It’s no small feat, but that makes the work all the more admirable - and you know you are doing something right when the mayor comes out to a rock show just to thank you.

Despite the apparent good the band hopes to do for its town, the announcement of a new lead singer won’t arrive without controversy in the communities who still follow Live. The departure of Ed Kowalczyk was controversial at best, but there was an air of sincerity that was unprecedented at such an event. “There’s no bad blood” said a clearly humbled Chris Shinn before one of the final songs, “I’m so blessed to be here.” It was a very real moment in the midst of a show that featured more rock bravado than you could shake a Les Paul at.

Speaking of the show, Live’s revamped sound featured a little synth and drum loops and the guitar stylings of Sean Hennesy (Candlebox, The Gracious Few), along with the brand new vocals. It was a risky move, but one that went a long way to make the show not feel like “Live and their new lead singer.” It felt new, it felt fresh, and by the way, the band’s biggest songs and their deepest back catalog are very, very safe in the hands of Chris Shinn.  The show was extremely aggressive and energetic, channeling the spirit of hits like “I Alone” and “All Over You” as if they were in their twenties again. It was a sight to behold and one any rock fan could appreciate.

The only thing I can’t answer for are what the new Live songs will be like. What made Live unique was the collaboration of the four band members and the deep, and often dark, spirituality of the lyrics. Even though the band’s more recent releases lacked the depth that made them famous, Live always had a lot to say about the world. So with its core lyrical voice touring as a solo "Christian" artist, it will be interesting to see where the band ends up lyrically, but if last night’s show is any indication the band is most assuredly back on their feet creatively.

All that will have to wait for another day - what we know now is that the band millions fell in love with in the ‘90s is back with a new voice and a desire to give back to the people who helped them along the way. In an industry where greed, sexuality, and drug abuse often steal headlines, it is a true inspiration to see someone do something different.