God Loves Everybody: Phil Madeira and Hymns for the Rest of Us

An all-star group of musicians performs songs about the love of God. Read our interview with the man who put it all together! 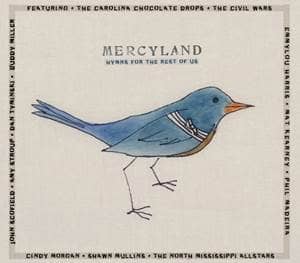 The Civil Wars, Mat Kearney, EmmyLou Harris, and Shawn Mullins; these artists don’t appear to have a great deal in common. As it turns though, they share something quite meaningful - they all believe that God is love. Not only do they believe it, they all sing about it on the new album Mercyland: Hymns for the Rest of Us, a soul-stirring collection of original and traditional songs performed by a variety of artists.

The album was co-written, produced, and brought to life by Nashville writer and performer Phil Madeira, It began way back when Madeira was a child growing up during the civil rights movement. His parents raised him in a small conservative church, but one that believed strongly in the power and importance of social justice. Echoing their church, his parents supported the movement not just in their actions but in the music they listened to. “When I was a young boy, my mother played me the music of Mahalia Jackson, which introduced me to the reality of a bone chilling, soul-stirring music that made everything else pale in comparison,” says Madeira.” These were joyous odes that sang of the love and the dignity of all humanity.”

The musical and religious influence of his upbringing shaped Madeira immensely, giving him a strong faith and a dedication to his musical craft that would carry him to stages all over the world as a member of numerous bands. It also made him a songwriter for such noted artists as Garth Brooks, Alison Krauss, and Toby Keith. Madeira became known as one of the top “behind the scenes” musicians in Nashville, but just a few years ago his passionate beliefs finally caught up with his career. Hymns For the Rest of Us is the result.

“During the last election I just felt like the voice of religion was so negative, so mean-spirited, that I just couldn’t take it,” Phil told Beliefnet, “I had this idea of this record, I didn’t have a title, I just knew that I wanted to do a record that was inclusive, that pondered the idea of that simple, old idea that God is love.” Feeling like he had the start of something great, he went to EmmyLou Harris, whose band he currently plays in, with the idea. The vision for the project hit her as strongly as it had hit Madeira, and with her support and a small band of others, he was able to get the idea of the project to the minds and hearts of artists The Civil Wars, John Scofield, Christian artist Cindy Morgan, and others.

All around him he was finding opportunities for his project. The goodwill surrounding his idea even extended to random circumstances, including meeting pop singer Mat Kearney: “We met at this party that I didn’t want to be at,” Phil laughingly recalls, “I knew Matt as a “pop guy,” but instantly Mat knew that Phil played with Buddy Miller. The recognition shook Phil’s preconceived notions about Kearney as an artist and Phil added him to his exceptional group of talented friends. Eventually he had a host of e-mail addresses to pitch the idea of playing on the album to, and he only had one person turn him down.

The inclusive nature of the album’s theme didn’t just end with the endearing mix of bluegrass and the blues, it also came from the artists that he ultimately asked to join him: “I wasn’t thinking “Oh I need to find Christians,” that was the last thing I was thinking about. I don’t think of it as a Christian record, I think of it as something that is trying to get to the heart of what Christianity is supposed to be about.” The artists on this album wouldn’t be in ultimate agreement about religion, and certainly not about music, but here they all are bringing voice to an absolutely beautiful theme. That accomplishment alone captures the theme as well as any of the songs do.

Phil would spend the next three years writing and recording songs with his wily mix of music veterans and newcomers, funding the project on his own. In the end he had an album of spiritual songs, that he interestingly dubbed “hymns.” The word can bring up a number of powerful ideas, from choirs, to organs, to small back country churches. This album takes the idea of a hymn and broadens it in a surprising way – by making the songs personal. Phil reflected on this idea “Certainly Cyndi Morgan’s tune, “Leanin’ on You”, that one, and even the Chocolate Drops’ song are the two closest things to actual hymns, The rest is very personal, but I felt like the congregation that I assembled on this thing is really individuals singing their own personal hymns, trying to give a voice to everybody who is tired of this fundamentalist sort of paradigm.”

The personal nature of the album hits you right at the very start with the Civil War’s “From This Valley,” which captures the feeling of loving God but feeling like you are on the outskirts of religion. “It was really important that the first two songs on the record have a similar thread. When I sat down to write with John Paul and Joy I had an agenda, and that agenda was that I wanted to highlight the outcast. I wanted to highlight the person for whom religion seems like they’re outsiders.” To complete the thematic setup for the album he went to Shawn Mullins for a song about God embracing the outcast and everyone else along with them.

“That idea was no one owns God, number one, and number two, that God doesn’t hate anybody, and that’s such a reactionary chorus to the Westboro Baptist people who for being such a small group they are probably the loudest and most noticeable of the groups who are pervayors of this idea that God hates anyone.” The two songs couldn’t be more different musically, with the Civil Wars’ playing their intensely personal bluegrass versus Shawn Mullins’ deep, bluesy riffing on “God don’t hate the Muslims/God don’t hate the Jews/God don’t hate the Christians/but we all give God the blues.” This one-two punch carries the rest of the album, expressing these opening themes in many interesting ways.

It is in that theme that this motley group of songs finds life. They are solid across the board, and I would have expected nothing less from the all-star cast assembled, but what will take you aback is the sheer depth of the tones and lyrics present. It’s the kind of album that will transport you to another place and time, one where you are one on one with an artist listening to them bare their soul.

Phil set out to create an album about God being love, and what came out of it was something more - It is an examination of the uniquely human response to the love of God. In a world where many spiritual songs sound like copy and paste renditions of each other, this group of artists is willing to go deeper. It is honest, difficult, uplifting, fun, and, really, an encapsulation of who and what we are as humans and how that humanity leads to many, many, many different views of God’s love for us.

Toward the end of our interview Phil recalled humbly his core motivation for the album, he “just wanted to get a conversation going,” I have no doubt that he will, but to me the conversation is already right here on the album already.

Are you ready to be a part of it?