Committed is riding a wave of success since winning NBC's The Sing-Off. Theron "Therry" Thomas, one of the group's outstanding tenors, talked with us about their faith and their desire to inspire others. 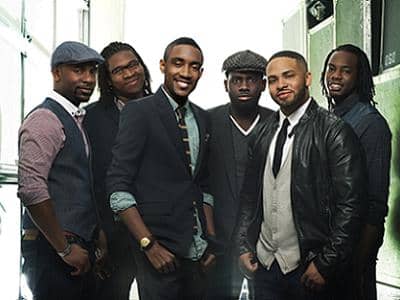 This time last year Committed wasn’t on anyone’s radar. Only a year later, they are on a national tour promoting the release of their upcoming debut album. The six quiet boys from Alabama stormed the national stage on NBC’s a capella competition The Sing-Off, delighting audiences from the very beginning with a standout performance of Maroon 5’s “This Love.” From there, they never looked back, giving strong performance after strong performance all the way into the championship.

Now, the group is readying the release of their self-titled album. It is a mix of inspirational songs, covers, and stand-out gospel tracks. The group takes you to the club and to the church, filling the album with stand-out arrangements and superb vocal performances. Stand out songs from the album include the inspiring “Unstoppable,” a groundbreaking arrangement of gospel traditional “Soon Ah Will Be Done,” and a fun and funky cover of Lynard Skynard’s classic “Sweet Home Alabama.” The group has an uphill climb as a capella group, but if any album is going to be a mainstream breakthrough this will be the one.

I recently caught up with one of the group’s tenor leads, soft spoken Theron “Therry” Thomas. We talked about touring, the album, their faith, and The Sing Off. The group is impressive on the stage, but they may be even more so off the stage. Read on!

How is the tour going? Is this the first tour you’ve ever done?

Yes, this is the first tour. It’s been great, it’s been tiring, we’ve been enjoying ourselves with all the fans. It’s just a lot of singing.

This is a pretty great time for a first tour.

Is this also the first recording?

Tell me a little about that process.

Well, Tommy does all the arranging, and he stays up to all hours of the night trying to get arrangements for us. Then we go to the studio and stack it from the bass to the top. Then we add some little nuances here and there, some extra notes here to fill in the chorus. It was a lot of fun, we went in one by one and just had to get it done.

Do you enjoy performing live or recording more?

What was it like working with the judges from the Sing-Off (Shawn Stockman of Boyz II Men, Nicole Scherzinger of Pussycat Dolls, and Ben Folds)?

Oh they are awesome, awesome people. They were great judges, they were honest. They were really cool people on and off the stage. Even until now we see them and we talk like regular friends instead of contestant and judge.

How did you all go about selecting the songs?

Well it wasn’t completely in our control, but for sure we didn’t want anything that was out of our character. We’re a Christian band. We’re not gospel artists, but we’re not completely about sex either (laughs). So you know, it’s about finding that balance. We have our Christian music but we also have our inspirational music. [There are] songs about doing anything, you know, that you can do anything with love if you put your mind to it. And we have songs about heartbreak, and some covers. It’s a little bit of everything, we just wanted to show all sides of us.

Has it been a challenge to learn how to perform the songs that were new for the album?

It was actually a really good thing, we’re doing things with new ears and filling [the songs] out in different ways than we are used to. Used to we would just do six parts with “oohs” and “ahs,” and now we have instrumentation and different percussion instruments, so it’s been fun and a great experience developing that.

Did you get to record any of the vocal instruments?

I didn’t do as many because a lot of times I was doing the lead. There were a lot of instruments though. There was guitar, and Tommy does a lot of the vocal percussion. Snare, hi hats, cymbals, all that stuff.

What kind of music inspired the group while making this album?

Are these the kind of the albums you hope to make?

What is your religious background?

We are Seventh Day Adventists. We observe the Sabbath from Friday night to Saturday night. We grew up in church.

How has your faith life impacted your life on the road?

What kind of spiritual activities do you do as a group?

We have worship together everyday. We sing, and we read a devotional, and we pray. Usually in the tour bus.

Do you all keep up with any of the other Sing-Off contestants?

Definitely, we became a family on the show, we still talk to them almost everyday. They’ve definitely become like our brothers and sisters.

What kind of challenges do you face as an a capella group?

Because we are an a capella group, it’s not the most mainstream idea for the listeners.

The mainstream world likes to have a lot of instrumentation, bass, all that stuff. We’re coming to where it doesn’t sound like anything is missing. All the instrumentation is there, if you listen to the album you can’t tell that anything is missing. Some people even mistake our voices as instruments. I guess that’s a good thing, but when we perform all that stuff isn’t there. We added parts here and there on the album, but performing is a different story. So performing certain things and having them come across the same way it does on the album is the biggest challenge.

Give these guys support by buying the album and going to see them live. They deserve it.